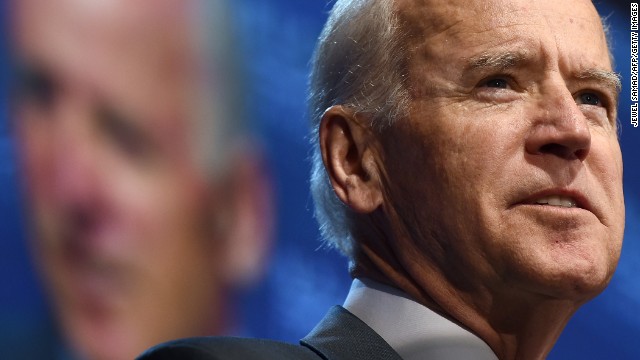 (CNN) - Vice President Joe Biden laid the interests of the United States, and the world, alongside the success of African countries in a pledge to support regions of the continent where he says democracy is threatened.

Citing an old African proverb, Biden encouraged the attendees to work with partners for a better future: “'If you want to go fast, go alone. If you want to go far, go together.’ There is no time when that is more true than today. We’re prepared to go with you, if you want us to.”

In the first big event of African Leaders Summit held in Washington D.C., Biden’s audience was made up of members of African non-profits and dignitaries gathered for a “Civil Society Forum.” He praised their courage in fighting for democracy in countries where activism is sometimes very dangerous.

“The future of Africa depends every bit of much on those of you who are part of the civil society as it does the leaders with whom the President and I will meet tomorrow,” Biden said. “No democracy can survive without the active and intense participation of its people.”

For Biden, that means giving women the opportunities to be heard and wield power where in the past they have not.

“Its wasting half the initiative, half the brain power, half the passion, of a nation,” Biden said, also acknowledging that the obstacles to gender equality in Africa seem daunting. “That’s where you come in..”

Biden also described what he sees as the foundations of a successful democratic society – one that is guided by the will of the people. He described how corruption in government, court systems and law enforcement can thwart a genuine democracy and tasked his audience with rooting it out.

“It’s a cancer in Africa as well as around the world. Widespread corruption is an affront to the dignity of its people, and a direct threat to each of your nations’ stability,” said Biden.

The Vice President used his own government as an example of how to defeat corruption – he described how the U.S. appoints permanent officials called Inspector Generals tasked with checking on the affairs of government organizations and investigating allegations of corruption.

“We’re not perfect,” Biden admitted. “We have these systems where we tend to find out where corruption lies and eventually get to it. So we’re prepared to work with you.”

“In your hands, with your help, Africa can and will go so much further. You’re the fastest growing economies in the world and quite frankly the success of the rest of the world depends on part on your success,” said Biden in closing.

“With people like you assembled in all of this room, as hard as it is, I’m confident that you will be successful.”