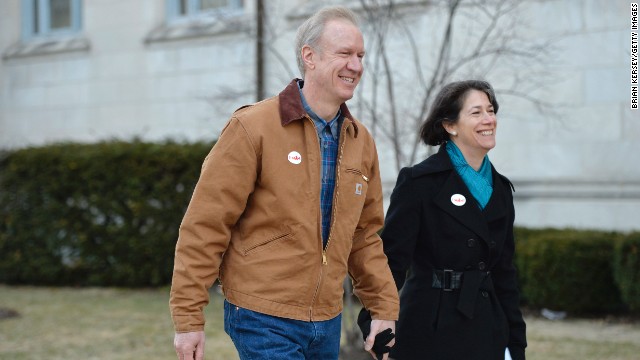 (CNN) – Critics are pouncing on remarks Bruce Rauner, the Republican nominee for governor in Illinois, made to supporters earlier this year that a government shutdown was an option to help the state deal with its financial troubles.

Video of his comments picked up steam on Monday as the Illinois Federation of Teachers, which recently threw its support behind Democratic incumbent Gov. Pat Quinn, circulated the clip, posted to the union's YouTube page, of Rauner addressing the Tazewell County Republican Party at its Lincoln Day dinner in March.

"We sort of have to do a do-over and shut things down for a little while, that's what we're going to do," Rauner said.

Rauner, a millionaire businessman and first-time candidate from the wealthy suburb of Winnetka on Chicago's North Shore, beat out three state lawmakers in the March GOP primary, and will go on to face Quinn in November’s general election.

In response to the outcry, Rauner's campaign said their candidate "has put forth a detailed plan for reviving Illinois, and shutting down state government is not among those plans."

"But if the choice is between that and four more years of failed leadership, higher taxes, and high unemployment from Quinn and Madigan, a whole lot of Illinoisans might think less government is a pretty good idea," spokesman Mike Schrimpf told CNN.

A longer version of Rauner's speech at the March dinner was posted by his campaign to its YouTube page shortly after the event.

"It's going to be rough. It's going to be hardball but I'm used to that. I've transformed a lot of business organizations in my life and I can bring that same discipline in Springfield," he said.

Republicans see takeover potential as Quinn is considered one of the most vulnerable Democratic governors up for reelection.

Rauner's comments gaining traction Monday follow last fall's federal government shutdown And closer to home, it comes as Illinois struggles with how to fix the state's ailing retirement system - considered the most troubled in the country.