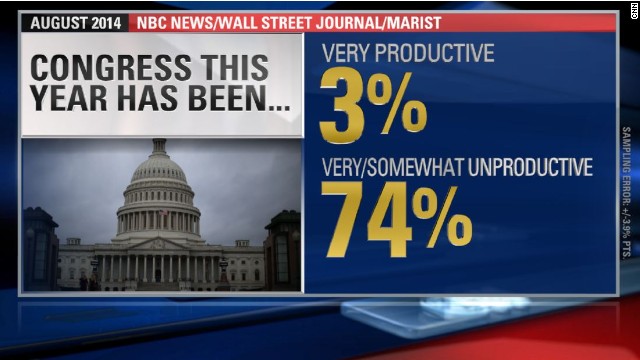 Poll: Only 3% of voters think Congress is very productive

And according to a new poll, a strong majority Americans agree with them.

Nearly three-fourths (74%) of registered voters said Congress has been "very unproductive" or "somewhat unproductive" this year, according to a poll released Sunday by NBC News/Wall Street Journal/Marist College.

Sunday's poll is just the latest data point that shows how unpopular Congress has become.

According to Gallup, only 15% of Americans approve of Congress, while just 7% say they have "a great deal" or quite a lot" of support for the legislative body.

Another Gallup poll from 2013 also found that Americans have more faith in the ethics of car salespeople, TV reporters and lawyers than members of Congress.

Democrats, who say House Republicans are the ones blocking legislation, have hammered Congress for its lack of productivity.

"This has become the least productive Congress in modern history, recent memory," President Barack Obama said in April repeating a charge that Democrats have made a number of times.

House Republicans, however, contend that it is the Democratic Senate that's keeping Congress from getting anything done.

Last year, House Speaker John Boehner was asked about becoming the least productive Congress in history. Responding to the criticism, Boehner said Congress "ought to be judged on how many laws we repeal."

The telephone poll conducted between July 28-31 of 634 registered voters has a margin of error of plus-or-minus 3.9%.