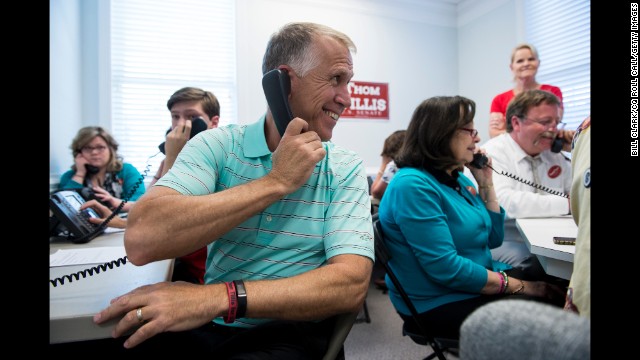 Washington (CNN) – Democratic candidates this cycle are working feverishly to exploit their party's edge among female voters, thrusting issues like equal pay, paid sick leave and women's health to the forefront of their campaigns.

Emily's List, the political action committee that backs female Democratic candidates, is stepping into the fray in North Carolina, home to the country's most expensive Senate race.

The group is launching a television ad Thursday attacking Republican Senate nominee Thom Tills over equal pay – a topic that President Obama has highlighted as a driving issue for Democrats this midterm election year.

Tillis is trying to unseat Democratic Sen. Kay Hagan in a race that most polls show as a dead heat. Outside groups have spent more than $14 million to influence the race so far.

"The same pay for the same work, but Thom Tillis said no," the ad's narrator says. "He led the effort in the statehouse to kill equal pay for women. Tillis doesn't understand. Working women help support their families."

As North Carolina House Speaker, Tillis blocked a paycheck fairness act in the state legislature. He says he opposes workplace discrimination but sees state legislation as redundant given the federal regulations already on the books.

Emily's List says the ad, backed by more than $500,000, will run in Charlotte, Asheville and Greensboro. It's the second TV spot Emily's List has aired in their $3 million political program targeting North Carolina women.

The equal pay issue has become a well-worn talking point for Democrats on the campaign trail this year, especially in North Carolina, Georgia, New Hampshire and Kentucky – all states with women candidates on the Senate ballot.

Obama slipped a now-familiar data point – that women earn 77 cents for every dollar a man earns – into his 2014 State of the Union speech when he demanded that Congress pass the Paycheck Fairness Act, which would strengthen the 1963 Equal Pay Act signed by President John F. Kennedy.

Obama called the income disparity between genders an "embarrassment" and proclaimed that "women deserve equal pay for equal work."

Democrats have since seized on the issue to drum up support among women and flummox Republicans, who have sometimes struggled to answer questions about "paycheck fairness."

"2014 is all about women – women voters, women's issues and women candidates, and women are going to be the key to Democratic victory in November," said Emily's List president Stephanie Schriock. "The issues affecting women and families are economic ones, and this election women voters are looking for candidates who are focused on creating economic opportunities and giving families a fair shot."