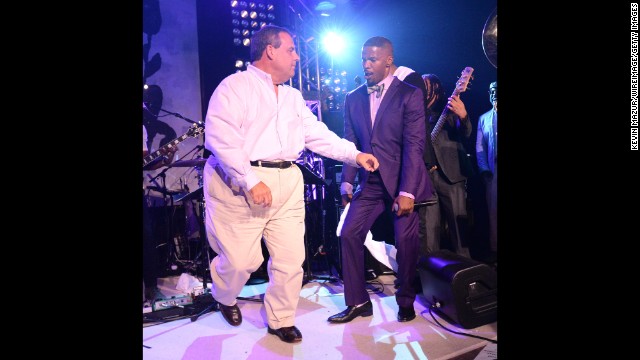 Christie dances in the Hamptons

Two months after Gov. Chris Christie showed off his moves on "The Tonight Show" with Jimmy Fallon, the New Jersey Republican was swinging his hips again this weekend, this time in the Hamptons with a roomful of celebrities.

The New York Post has video of Christie busting a move on stage with Jamie Foxx at a benefit for the Apollo Theater.

Christie, a potential presidential contender, was a guest of rocker Jon Bon Jovi, who also recruited the governor to help him complete the Ice Bucket Challenge this weekend.

Christie wasn't the only Republican strutting his stuff Saturday. Sen. John McCain also hopped on stage with Foxx to perform the robot dance, the Post reported.

"I saw Chris Christie and he was jamming," Foxx said, according to the Wall Street Journal. "I looked down at McCain and he was like, 'I can do this.' It's the ones you don't expect. It's the Republicans. Republicans love to dance in the Hamptons."

In June, after his dance-off with Fallon, Christie predicted his moves would be in high demand.

"I got a feeling that these dances now will be frequently requested no matter where I am - the next wedding, the next bar mitzvah," Christie said on a radio program.

Had a good time this weekend with @iamjamiefoxx, supporting a worthy cause @apollotheater http://t.co/RV3qVIfhRi

Christie said his son told him: "See Dad? See how many hits you can get if you're willing to humiliate yourself on national television for five minutes."