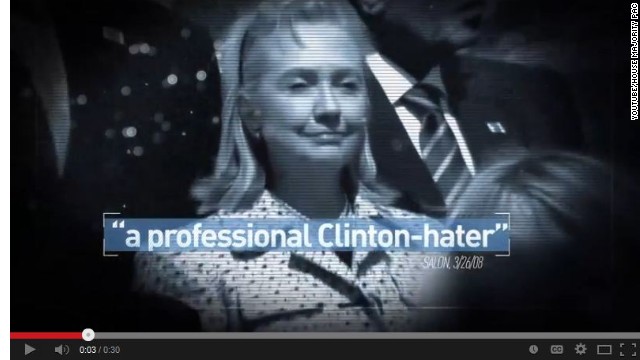 Washington (CNN) – Hillary Clinton isn't running for Congress in Virginia's 10th district. But you wouldn't know that based on a Democratic super PAC web ad targeting the race.

Clinton, the former secretary of state and likely presidential contender in 2016, is featured prominently in a House Majority PAC web ad released Monday that looks to target Barbara Comstock, the Republican nominee for the northern Virginia seat.

On the campaign trail, Comstock has heralded her role as chief investigative counsel for the House Committee on Government Reform during former President Bill Clinton's second term in office. Comstock was a thorough investigator and headed a number of high-profile investigations into Clinton White House affairs.

While some turned up malfeasance, others didn't and Clinton loyalists have labels Comstock a serial and professional Clinton-hater.

The ad goes on to say that Comstock is "almost unhinged in her passion to bring down the Clintons," citing a book by David Brock, a Clinton defender.

"Regardless of Clinton's political future, Virginians deserve a representative who will focus on them, not a long-standing political vendetta," Matt Thornton, communications director for the PAC, said in a statement.

In a statement to CNN, a spokeswoman for Comstock called the ad a distraction from "the issues residents of the 10th District are concerned about."

"Virginians are concerned about the future not decades old political grudges," said Johanna Persing, a campaign spokeswoman. "Virginians know that Barbara Comstock has a proven legislative record of helping to grow the economy and creating jobs and those are her priorities when she is elected to Congress."

The ad is paired with a simple website, StandingWithHillary.com. On the website, visitors are asked to register with their email and postal code.

Comstock has not been shy in her desire to continue to investigate the Clintons. She told delegates at the Virginia state Republican convention that if elected, she would try to get to the bottom the September 11, 2012 terror attack on a U.S. compound in Benghazi, Libya that killed four Americans. The attack, which occurred while Clinton was secretary of state, has continued to dog her since she left the office in 2013.

Clinton has been more open about her presidential aspirations of late. Widely seen the frontrunner for the Democratic presidential nomination in 2016, the former first lady is already getting hit in campaign ads from the right.

Comstock will face off against John Foust, the Democratic nominee for the seat, in November. Both are vying to replace the retiring Rep. Frank Wolf.