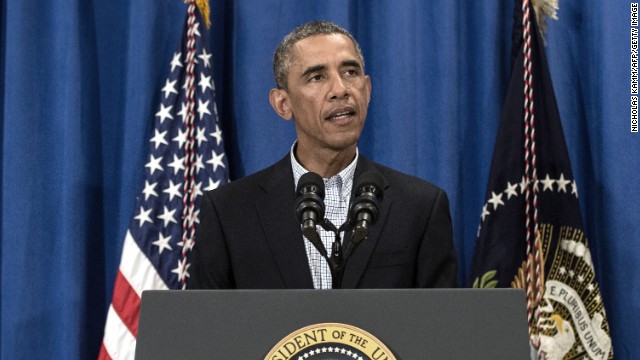 Obama on hiatus from vacation with Iraq, Ferguson on his agenda

The short visit was announced on August 6, the day before Obama authorized targeted airstrikes in Iraq aimed at protecting U.S. personnel and preventing a potential genocide of minorities by terrorist group ISIS.

U.S. military action in Iraq is just one of the issues the White House is monitoring while the President takes his vacation. Over the past week, in between golfing with friends, visits to the beach and jazz concerts, advisers also kept Obama apprised of violent protests in Ferguson, Missouri, over the shooting of Michael Brown.

Obama will have meetings on both issues on Monday. After his daily briefing in the morning, the President will convene the National Security Council to receive an update on the situation in Iraq. Recent reports suggest Kurdish fighters, with help from U.S. warplanes, may soon score an important victory over ISIS by wresting back control of the Mosul Dam.

Later in the day the President will meet with Attorney General Eric Holder for updates on the situation in Ferguson. The Department of Justice has taken an active role in investigating whether police violated Brown's civil rights and announced over the weekend that a federal medical examiner will conduct a third autopsy. This follows the initial state autopsy as well as an independent one at the request of Brown's family.

Holder and senior adviser Valerie Jarett have taken the lead on the situation in Ferguson, giving the President regular briefings and communicating with local and state leaders and civil rights groups on the ground.

A private lunch with Vice President Joe Biden, just returned from a vacation in the Hamptons, is also on the schedule.

The White House is expected to make an announcement about immigration in the coming month. With Congress unable to come up with a plan that could pass both chambers, Obama has said he's not going to wait for congressional action on the issue. He places the blame squarely on Republicans' failure to negotiate legislation that will improve the situation along the southern border, where thousands of unaccompanied children have flooded toward the United States this year from Central America.

As for Tuesday, the President's schedule is unknown except that he will leave a humid D.C. (with a chance of rain) for the sunny skies of the Vineyard at some point.