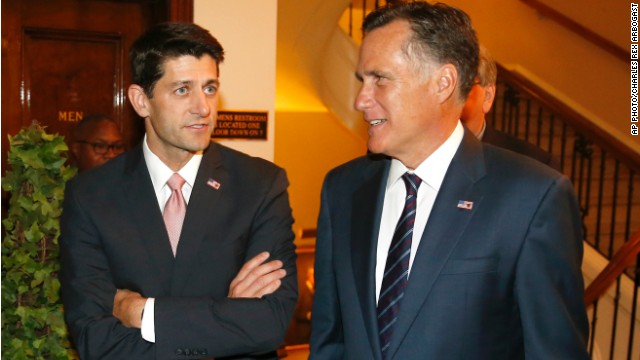 Romney: Clinton won't be able to distance herself from Obama

At a book event for Rep. Paul Ryan, his former running mate, Romney said that Hillary Clinton distancing herself from some of President Barack Obama's foreign policy was reminiscent of the campaign he ran against the President.

"She was very critical of the president’s foreign policy, and basically said ’he doesn’t have one,’" said Romney, the 2012 Republican presidential nominee. "I used to say that during the campaign."

Romney was referring to Clinton's interview with the Atlantic's Jeffrey Goldberg, where the former secretary of state appeared to create space with the President on foreign policy and knock some of his guiding principles.

Clinton's split with Obama and the subsequent beltway kerfuffle – where Clinton was knocked by former Obama aides and forced to backtrack – was evidence of how difficult it would be for her to create any distance with the President.

"Hillary Clinton tries to distance herself from the foreign policy of the President," Romney said with a laugh in Chicago. "That would work better were she not his secretary of state for four years."

Bloomberg was the first to report on the Romney-Ryan event.

Romney later added that if Clinton were to win in 2016 – she is the favorite for the Democratic nomination and is admittedly thinking about a run – she would just "keep these things going" like they have been under Obama.

Romney made similar statement in a Thursday night appearance with Ryan on Fox News.

The former Massachusetts governor's critique echoes what Ryan and other Republicans have said: Clinton won't be able to shake the Obama record.

"I don't think people are going to want to have an Obama third term and no matter how she tries to shake that label, she won't be able to," Ryan said in an interview with USA Today earlier this week.

This line of questioning by Romney and Ryan has worried some Democrats.

Some Clinton associates have quietly expressed concern that one of the most effective critiques could be that her presidency, should she run and be elected, would be nothing more than Obama's third term.

"She was in his government, she was at his side," a Clinton friend and former aide told CNN. "That is, the way to go after her is four more years of the same old thing. The question they should ask her is 'Tell me 10 things that you disagree with him on.'"

Not all Democrats, especially those tasked with defending Clinton, agree that the former secretary of state will need to distance herself from Obama.

"Hillary Clinton is one of the most admired and trusted public figures in America and should she run for President, she will run on her own record and implement her own vision for moving our country forward," said Adrienne Elrod, spokeswoman of Correct the Record, a pro-Clinton communications group, in response to Ryan's critique.