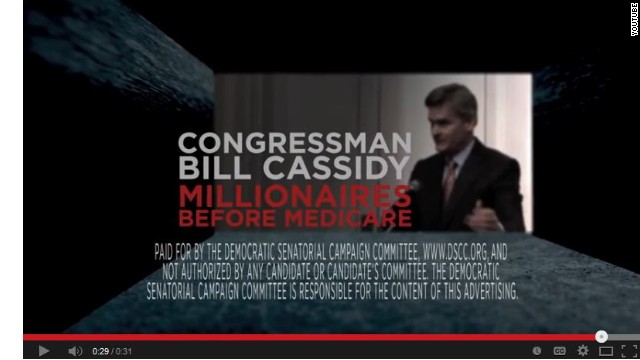 The claim stems from Cassidy's support for the 2014 Republican Study Committee Budget, which would have, over time, increased the Medicare eligibility age to 70 by 2024.

“Congressman Bill Cassidy puts millionaires before Medicare and if he has his way would turn Medicare into a voucher program, raise the eligibility age, and force seniors to pay more for health care,” Justin Barasky, a DSCC spokesman, said in a release about the ad.

The ad is part of the DSCC's $2.5 million ad buy in Louisiana, where incumbent Democratic Sen. Mary Landrieu is running for another six years in the Senate.

Cassidy has made Obamacare and its changes to the Medicare Advantage program a platform in his race against Landrieu. On his campaign website, Cassidy calls Medicare a "commitment to seniors" that "is going bankrupt."

"We need common-sense solutions that will reform and protect Medicare for generations to come," Cassidy said.

The race between Cassidy and Landrieu is a close one and is key for Democrats keeping control of the Senate in 2014.

The race has also become contentious, as of late.

On Thursday, The Washington Post reported that Landrieu doesn’t own her own house in Louisiana. Instead, the paper reported that the incumbent senator listed her home address on a recent campaign filing with the Federal Election Commission as being her house on Capitol Hill in Washington.

Cassidy seized on the residency charged and immediately sent a fundraising appeal to supporters saying the allegation “isn’t actually surprising because Senator Landrieu has represented DC values for a long time.”

Barasky said that despite the timing, the ad was "not a response to residency in any way."