(CNN) - ACORN, the community group from which a mighty oak of political controversy grew, announced it is filing for Chapter 7 bankruptcy by the close of business Tuesday. In March, it began bringing its national operations to a close.

"For over 40 years ACORN has fought the good fight," said CEO Bertha Lewis, today, in a statement on the group's website. "The ongoing political onslaught caused irreparable harm."
END_OF_DOCUMENT_TOKEN_TO_BE_REPLACED

A review of grants by nine federal agencies, mostly for housing issues, found problems with only one award - and in that case, the separately administered ACORN Housing Corporation quickly provided a missing piece of documentation, the Government Accountability Office reported.

Nearly two dozen members of Congress requested an investigation after a series of complaints against ACORN and its affilliates, including an accounting scandal, several cases of voter registration fraud and the release of edited videotapes made by conservative activists that appeared to implicate ACORN workers in facilitating prostitution.

(CNN) - Conservative videographer James O'Keefe and three co-defendants pleaded guilty Wednesday for entering federal property under false pretenses for a January incident in which they tried to access the phone system in the New Orleans office of Sen. Mary Landrieu.

O'Keefe, 25, and co-defendants Joseph Basel, 24, Robert Flanagan, 24, and Stan Dai, 25, were each fined $1,500, placed on probation and ordered to do community service, according to a Department of Justice statement.

The four were arrested in January after Basel and Flanagan posed as telephone repair workers to get into Landrieu's office.
END_OF_DOCUMENT_TOKEN_TO_BE_REPLACED 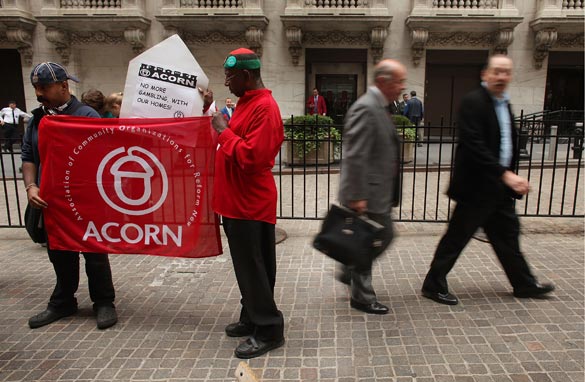 ACORN's board has approved the steps required "to responsibly manage the process of bringing its operations to a close over the coming months," the group said in a statement Monday. (Photo Credit: Getty Images/File)

(CNN) - The community organizing group ACORN announced Monday it is closing its operations amid falling revenues.

The announcement came a day after the board of the Association of Community Organizations for Reform Now met and approved the steps required "to responsibly manage the process of bringing its operations to a close over the coming months," an ACORN statement read.

The group's remaining state affiliates and field offices will close by April 1 and a plan will be developed to pay its debts, the statement said.

"ACORN's members have a great deal to be proud of - from promoting homeownership to helping rebuild New Orleans, from raising wages to winning safer streets, from training community leaders to promoting voter participation - ACORN members have worked hard to create stronger to communities, a more inclusive democracy, and a more just nation," it said.
END_OF_DOCUMENT_TOKEN_TO_BE_REPLACED

(CNN) - Community organizing group ACORN needs wide-ranging reforms after an embezzlement scandal, but broke no laws when conservative activists posing as a prostitute and a pimp approached members in a videotaped "sting," an attorney's report concludes.

The videos led to the dismissal of four ACORN employees who appeared to offer advice to the couple and to federal legislation barring the group from receiving federal funds. But a review by former Massachusetts Attorney General Scott Harshbarger, who was hired by ACORN to examine the issue, found "no evidence that any action, illegal or otherwise, was taken by ACORN employees on behalf of the videographers."

"While some of the advice and counsel given by ACORN employees and volunteers was clearly inappropriate and unprofessional, we did not find a pattern of intentional, illegal conduct by ACORN staff," Harshbarger's report concludes. "In fact, there is no evidence that action, illegal or otherwise, was taken by any ACORN employee on behalf of the videographers."
END_OF_DOCUMENT_TOKEN_TO_BE_REPLACED

The congressional appropriations resolution specifically provides that no federal dollars be provided to ACORN "or any of ACORN's affiliates, subsidiaries, or allied organizations."

In a release announcing the suit, an attorney for ACORN said Congress had overstepped its authority in singling out the organization for denial of federal funding.

"It's not the job of Congress to be the judge, jury, and executioner," Jules Lobel, an attorney with the Center for Constitutional Rights, said in the statement. "We have due process in this country, and our Constitution forbids lawmakers from singling out a person or group for punishment without a fair investigation and trial. Congress, as well as individuals and organizations must abide by the rule of law."

ACORN's lawsuit alleges that Congress' action is unconstitutional and seeks a court order prohibiting the federal government enforcing or complying with the congressional resolution.
END_OF_DOCUMENT_TOKEN_TO_BE_REPLACED

WASHINGTON (CNN) - The head of ACORN on Tuesday sharply deplored recent videos showing some of the group's workers advising people how to set up a prostitution business.

"It made my stomach turn," Bertha Lewis, chief executive officer of ACORN, told reporters at the National Press Club in Washington. "It just made you sick."

"So yes, I terminated those employees."

At the same time, Lewis defended the community organizing group and punched back at widespread criticism, touting the group's efforts in helping poor people in the areas of housing and voting.

She backed up the group's legal action in Maryland against the makers of one of the videos. Video, shot with a hidden camera, shows conservative activists posing as a pimp and a prostitute. Lewis said that "we want to hold them accountable" for what she said was breaking the law.

Similar videos were made at other ACORN offices.

On September 15, after the Senate voted to defund the community organizing group, Steele released a statement accusing ACORN of "nefarious activities," saying it uses "illegal means to achieve its ends." A few days later, on September 24, Steele called for congressional Democrats to investigate the "corrupt organization" and said damage control efforts by ACORN officials were "insulting."

But during a speaking appearance in the days between issuing those two statements, Steele had kind words for ACORN and its CEO, Bertha Lewis, who happened to be guiding that so-called damage control.

Appearing September 21 at Philander Smith College, a historically black college in Arkansas, the RNC chairman spoke diplomatically of the group and its history of organizing in low-income communities.

"The organization has a problem that it needs to deal with," Steele told the audience in remarks that were recorded and posted on YouTube over the weekend. "I will say that current head of the organization, she has done a phenomenal job of getting out in front of it. I applaud her. I take her at her word that she wants to make sure that the bad apples are thrown out."

END_OF_DOCUMENT_TOKEN_TO_BE_REPLACED

NEW YORK (CNN) - Troubled community organizing group ACORN suffered another setback on Monday, when Bank of America announced it is pulling its funding of ACORN Housing.

In a statement, Bank of America said that is it "suspending current commitments to ACORN Housing and will not enter into any further agreements with ACORN or any of its affiliates" until it is satisfied that all issues related to the organization have been resolved.

The Association of Community Organizations for Reform Now, known as ACORN, has been under investigation by both the Justice and Treasury Department after videos recorded on hidden cameras by conservative activists showed
employees allegedly giving advice on illegal activities.

ACORN is also conducting its own investigation through an independent auditor and it says that it has fired the employees involved in the recorded incidents.

END_OF_DOCUMENT_TOKEN_TO_BE_REPLACED

WASHINGTON (CNN) - The community organizing group ACORN is under review by a Treasury Department inspector general as part of an investigation into the Internal Revenue Service's oversight of non-profit organizations.

It is one of several steps taken - including an investigation initiated by ACORN itself - since the release of videos - shot by conservative activists with a hidden camera - showing ACORN workers apparently giving advice on how to conduct illegal activity.

The office of the Treasury Inspector General for Tax Administration has confirmed to CNN that it is "initiating a review of ACORN." Office spokeswoman Li-Yun Chien told CNN that the inquiry is related to a non-profit fraud investigation, and how IRS internal processes handle possible fraud issues in organizations that are classified as non-profits, like ACORN.

She said the request for an investigation by the inspector general, J. Russell George, came from the offices of Sen. Susan Collins, R-Maine, and Rep Darrell Issa, R-California. They asked for a multiple-agency review of ACORN and how it uses its tax exempt status

ACORN - the Association of Community Organizations for Reform Now - did not immediately respond to a CNN request for comment.
END_OF_DOCUMENT_TOKEN_TO_BE_REPLACED