Speaking on CNN's "John King, USA," Gonzales, a Republican, said Romney's past statements about policies affecting Latinos, including his policy of "self-deportation," will be hard for him to reverse.
END_OF_DOCUMENT_TOKEN_TO_BE_REPLACED 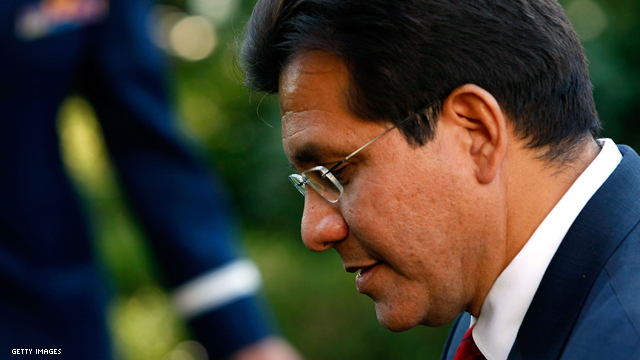 Rubio is not ready to be president, Gonzales said, and the vice president "must be ready on day one."
END_OF_DOCUMENT_TOKEN_TO_BE_REPLACED

Letter: No charges in firing of 9 U.S. attorneys during Bush years

Special counsel Nora Dannehy investigated the firings and Attorney General Eric Holder "has accepted her recommendation that criminal prosecution is not warranted," the letter said.

The question as to whether the dismissals were made for political reasons led to a huge controversy in Washington. Gonzales ultimately resigned.

Gonzales will work to recruit minority students for the Lubbock-based college's diversity office and teach a junior-level political science seminar on "Contemporary Issues in the Executive Branch," according to a statement from Texas Tech.

"I am excited that Alberto Gonzales is bringing his experience to Texas Tech," Kent Hance, Texas Tech's chancellor, said in the statement. "His own upbringing in Houston as part of a migrant family with eight children makes him qualified to tell underrepresented Texas students that college is possible."

END_OF_DOCUMENT_TOKEN_TO_BE_REPLACED

Terwilliger tells CNN his firm is "assisting Judge Gonzales as we assist many companies and individuals when they are cooperating with investigations. It is always unfair for anyone to assume that hiring a lawyer represents anything other than common sense."

END_OF_DOCUMENT_TOKEN_TO_BE_REPLACED

Michael B. Mukasey, 66, was nominated to the bench in 1988 by President Ronald Reagan, and was chief judge until September 2006 for the Southern District of New York, one of the nation's busiest and high profile U.S. court districts.

Gonzales, who was beset with controversy during his tenure, said he would resign Sept. 17. Solicitor General Paul Clement, the Justice Department's No. 3 official, will be acting attorney general until a successor is confirmed.

Friday was the embattled Attorney General's last day at the helm of the Justice Department.

WASHINGTON (CNN) - Attorney General Alberto Gonzales received an emotional and staunchly supportive send-off in the final hour of his last day on the job at the Justice Department on Friday.

With a handful of protesters noisily celebrating his departure on the sidewalks outside, Gonzales was praised by no fewer than 10 Justice lieutenants and agency heads - some with their voices cracking.

Gonzales himself at one point wiped tears from his eyes and praised the Justice Department as "a place of inspiration" in his farewell speech.

But he also expressed concern about challenges ahead, noting his day had begun - as always - with an intelligence briefing.

"As I depart, I wish - I wish that I can tell you that work is done. That there are no threats, but I cannot. Our enemy is resourceful and determined, and I will wonder and worry when I'm gone what is being said in those briefings," Gonzales said.

Gonzales: We all make mistakes

DES MOINES, Iowa (CNN) - It may be his last week on the job, but embattled United States Attorney General Alberto Gonzales said he wasn't about to cancel a scheduled trip to Iowa. He met Thursday with local partners of a group that combats sexual abuse and exploitation of children, because he said it's an issue he and his wife view as "very important."

But at a news conference after the meeting, a reporter prefaced a question by mentioning that Gonzales has been harshly criticized in the weeks leading up to his resignation. Gonzales let out a subtle laugh. The reporter asked him how he'll look back on his tenure.

"With a great deal of pride, quite frankly," Gonzales said. "It's a great privilege to serve in this position, and when you serve in these positions obviously sometimes there are tough decisions and tough times that occur, but I think we did a lot of good things."

Gonzales cited an infrastructure that's been put in place to "protect our kids" as one of those positive things. He also said he thinks that under his watch a "lot of good things" have been done to protect the United States from another terrorism attack.

When asked if there was anything he regrets Gonzales said, "Well of course, we're all human and all of us make mistakes, and the thing that's important is to identify when those mistakes are made, acknowledge the mistakes, correct the mistakes and then you move on... So that's what I've endeavored to do as attorney general."

Name dropping about who will replace Alberto Gonzales started moments after he stepped down.

WASHINGTON (CNN) - It happens immediately after any high-level White House official resigns his or her post - political observers and Washington reporters go into overdrive over possible replacements.

The scenario played out Monday, when moments after news surfaced that Alberto Gonzales was stepping down from his post as attorney general, senior administration officials told CNN that current Homeland Security Secretary Michael Chertoff would likely get the nod.

If true, it would be "a surprise to Mike," another source later told CNN.

Yet other senior administration officials started knocking down such reports, telling CNN that Chertoff's role in Hurricane Katrina's aftermath could raise problems during Senate hearings.

Did things really change that quickly? Which sources had better information? What are the rules of engagement in the name-dropping game?