Biden to headline fundraiser for son

While Delaware Attorney General Beau Biden recuperates after suffering a mild stroke early last month, the vice president headlines a fundraiser for his eldest son, who is running for re-election this year.

The elder Biden also headlined a fundraiser for his son last week in Philadelphia.

END_OF_DOCUMENT_TOKEN_TO_BE_REPLACED

[cnn-photo-caption image= http://i2.cdn.turner.com/cnn/2010/images/05/18/art.beau.joe.biden.jpg caption="Delaware Attorney General Beau Biden was discharged from the hospital Tuesday."](CNN) - Delaware Attorney General Beau Biden - the son of Vice President Joe Biden - was discharged Tuesday from a hospital a week after suffering what his doctor called a mild stroke, according to a spokesman for the Delaware Department of Justice.

"On the morning of Tuesday May 11, Attorney General Beau Biden suffered a minor stroke," said Biden's physician, Robert Rosenwasser, in a written statement. "Due to rapid triage, diagnosis, and institution of appropriate medical therapy, he is leaving Jefferson Hospital for Neuroscience of Thomas Jefferson University neurologically normal.

"I am pleased to report that the results of his final discharge general and neurological exam find his neurological status perfect in all arenas including motor skills, language function, and cognitive assessment."

He predicted Biden will return to work "after a brief period of rest at home."

[cnn-photo-caption image= http://i2.cdn.turner.com/cnn/2010/images/01/25/art.beaubiden3.gi.jpg caption="Beau Biden told supporters Saturday he will be back on the job soon."](CNN) – Four days after apparently suffering a mild stroke, Delaware Attorney General Beau Biden - the son of Vice President Joe Biden - told supporters he is ready to get back to work soon.

The comments came in a surprise phone call to participants of a fundraising event the vice president hosted Saturday morning on his son's behalf.

“I just wanted to call and let each and every one of you know how much I appreciate your support for me and for the family on so many levels,” the younger Biden said. “I’m looking forward to getting back to work and running for re-election as well.”

Biden is seeking reelection to a second term as Delaware’s top attorney. He recently served in Iraq for one year as a captain with the Delaware Army National Guard. He was considered a front-runner to fill his father's former U.S. Senate seat this November, but in January he announced he had decided against a run for higher office.

“I’m eager to continue [what] we started, that many of you helped me start in 2006,” the younger Biden also told supporters. “I can’t wait to see you all. I’ll be home real soon.”

END_OF_DOCUMENT_TOKEN_TO_BE_REPLACED

"He will continue to follow standard protocol and receive medical therapy over the coming days, as is typical for any patient recovering from an event like this," the statement noted. "He looks forward to returning to his duties as attorney general in the near future."

Washington (CNN) - Delaware Attorney General Beau Biden - the son of Vice President Joe Biden - has suffered what doctors believe to be a mild stroke, according to the hospital.

Biden "was admitted this morning to Christiana Hospital in Newark, Delaware after having what we believe to be a mild stroke, according to a written statement from Dr. Timothy Gardner, medical director of the Center for Heart and Vascular Surgery at Christiana Care Health System in Delaware.

"He is in good spirits and talking with his family at the hospital. He is fully alert, in stable condition and has full motor and speech skills. We expect him to make a complete recovery." 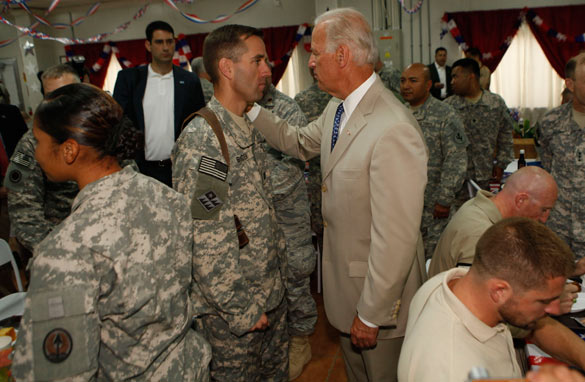 "He is alert, awake, and communicating with his parents and his wife, who are with him," the statement said.

The statement did not indicate the nature of Biden's illness.

Biden, 41, was elected as Delaware's attorney general in 2006. He recently served in Iraq for one year as a captain with the Delaware Army National Guard. He was considered a front-runner to fill his father's former U.S. Senate seat this November, but in January he announced he had decided against a run for higher office.

Biden served as a prosecutor in the U.S. Attorney's Office in Philadelphia, Pennsylvania, from 1997 to 2002.

[cnn-photo-caption image= http://i2.cdn.turner.com/cnn/2009/images/10/05/art.biden.gi.jpg caption="Biden said his son's decision not to run for Senate had nothing to do with politics."](CNN) - Joe Biden is adamant his son's decision against a bid for the Delaware Senate seat held by the vice president for nearly four decades had nothing to do with the current political climate.

"He would have been a strong candidate. But honest to God, that's not the reason he didn't run," Biden said on NBC's The Today Show when asked if the Democratic Party's misfortune in a string of recent elections led to his son Beau's decision.

"He didn't run because he has one of the largest pedophile cases I suspect at least in the history of the state of Delaware," Biden also said of his son who currently serves as Delaware's attorney general. "He realizes…his responsibility is to do his job as attorney general. "

The younger Biden announced his decision earlier this week in what was a blow to the Democratic Party which now finds itself without a strong candidate to challenge the likely Republican nominee, Rep. Mike Castle, the former 2-term governor of Delaware.

"I cannot and will not run for the United States Senate in 2010," Beau Biden said in an e-mail to supporters Monday. "I will run for re-election as Attorney General."
Biden's seat is currently held by Ted Kaufman, who was named as an interim replacement for Joe Biden when he stepped down from the Senate after his election in November 2008 as vice president. Kaufman has also said he will not run for the seat.

"I cannot and will not run for the United States Senate in 2010," Biden said in an e-mail to supporters Monday. "I will run for re-election as Attorney General."

Biden's decision ends months of speculation that he would make a bid for the seat held by 36 years by his father and gives Republicans a strong chance to pick up a seat long held by the Democrats. Their likely nominee, Mike Castle, is Delaware's at-large congressman and a former two-term governor of the state.

"The challenges we're facing as a country are extraordinarily difficult," the younger Biden wrote in the e-mail. "The economy. Jobs. Health care. Energy. Education. Climate change. Financial regulation. Foreign policy. These are not only the issues of the moment - they're the issues that will determine our children's future. And as someone who has had the privilege of serving with the bravest men and women on this planet, I care deeply about how we treat our returning veterans and how we resolve our involvement in Iraq and Afghanistan.

"I feel strongly about these issues," he continued. "However, my first responsibilities are here in Delaware. I have a duty to fulfill as Attorney General – and the immediate need to focus on a case of great consequence. And that is what I must do."

END_OF_DOCUMENT_TOKEN_TO_BE_REPLACED

[cnn-photo-caption image= http://i2.cdn.turner.com/cnn/2009/images/09/29/art.bidens0929.gi.jpg caption="The vice president visited with his son Beau during a visit to Iraq on July 4 of this year."]
WASHINGTON (CNN) – Beau Biden, the son of Vice President Joe Biden and Delaware's attorney general, has returned from a year-long deployment to Iraq, according to the Delaware National Guard.

Vice President Joe Biden is set to address his son's unit at a return ceremony in Dover, Delaware on Wednesday, September 30, said Gratteri.

Ted Kaufman, a former chief of staff to Joe Biden when the vice president was a member of the Senate, was appointed by Delaware's governor to fill
Biden's old Senate seat. Many political observers called the decision to appoint Kaufman an effort to hold the seat for Beau Biden to pursue in a 2010 special election after completing his deployment overseas.

Delaware Rep. Mike Castle, long considered a likely Republican candidate for the vice president's old seat, has not officially announced his intention to enter the race.