(CNN) – In an interview to air on CNN's "Out Front with Erin Burnett" Thursday at 7 p.m. ET, David Axelrod – a senior adviser to President Barack Obama's campaign – argues that sexist comments made by radio host Rush Limbaugh and comedian Bill Maher are both distasteful but should be understood differently. 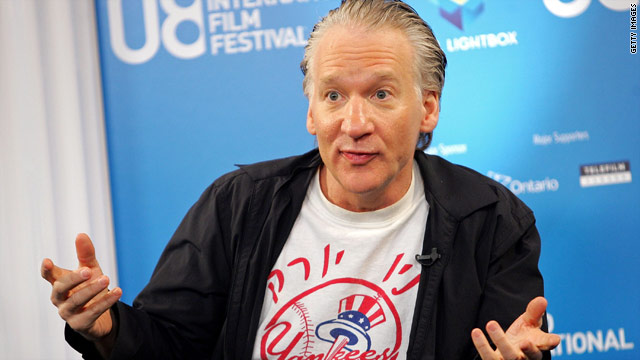 END_OF_DOCUMENT_TOKEN_TO_BE_REPLACED

Click to watch video
(CNN) - When pressed to choose, Bill Maher said he would rather Michele Bachmann become president in 2012 than Sarah Palin.

The liberal comedian and political commentator said he would pick the Minnesota congresswoman because "She's not someone who just sits there and reads the prayers on her Blackberry like Sarah Palin."
END_OF_DOCUMENT_TOKEN_TO_BE_REPLACED

Not one toke over the line?

(CNN) - During an interview on "The Situation Room," comedian Bill Maher revealed to Wolf Blitzer that actor Zach Galifianakis did not really smoke marijuana on his show.

"If it was a real joint, Wolf, I would have smoked it…I think it was cloves or something," Maher said, adding "Zach's crazy, he's not that crazy."

END_OF_DOCUMENT_TOKEN_TO_BE_REPLACED

Posted by
CNN's Jeff Simon
Click to watch video
(CNN) - Comedian Bill Maher on Wednesday repeated his frequent slams against Sarah Palin, calling her a "lazy money grubber" and claiming that "all she does is cash in." Maher was partly echoing sentiments expressed by Levi Johnston, the ex-boyfriend of Palin's daughter Bristol.

Johnston told Vanity Fair last October that the former Alaska governor, "would blatantly say [after the 2008 presidential election], 'I want to just take this money and quit being governor.'"

Maher also vented about President Obama's Supreme Court nominee Elena Kagan, the war in Afghanistan and illegal immigration in a wide-ranging interview broadcast on The Situation Room with Wolf Blitzer.