Feinstein: U.S. not meddling in Iran

Click to watch video
WASHINGTON (CNN) – A top senator with responsibility for overseeing U.S. intelligence activities said Sunday that the United States is not interfering with Iran’s internal politics.

“These questions have been asked as late as this past week of people in the clandestine operations who would know this – in a formal setting – and that’s the answers we were given,” the California Democrat added.

Asked about past American intelligence failures in Iraq, Feinstein expressed some misgivings about U.S. intelligence on Iran.

“I don’t think our intelligence – candidly - is that good. I think it’s a very difficult country in which to collect intelligence right now. I think our ability to get in there and change the course of human events is very low . . .”

After saying she thought President Obama was handling the situation appropriately, Feinstein also said it was important that the U.S. not be perceived as interfering in Iran’s political situation.
END_OF_DOCUMENT_TOKEN_TO_BE_REPLACED

Casey weighs in on Dem leaders' support for Specter

[cnn-photo-caption image= http://i2.cdn.turner.com/cnn/2009/images/05/10/art.casey0510.cnn.jpg caption="Sen. Casey said the decision to run or not to run belongs to a candidate rather than to a political party's leadership."]

Casey seemed to part ways with his party’s leadership when asked by CNN’s John King whether Democratic Party leaders - including President Obama, Vice President Biden, Senate Majority Leader Harry Reid, and Pennsylvania Gov. Ed Rendell - should be making public pledges of support to Specter in an apparent effort to dissuade any would-be primary challengers to the former Republican.

“I don’t think anyone in our party should ever dictate to a candidate,” Casey said on State of the Union. “That’s really up to that candidate, to run or not run,” Casey, a longtime Obama backer added.

Casey, who recently announced his own support for Specter, seemed to be acknowledging the possible candidacy of Pennsylvania Rep. Joe Sestak.

While Sestak has yet to formally announce that he will challenge Specter for Pennsylvania’s Democratic Senate nomination, the congressman has been critical of Specter in a number of interviews since Specter’s recent defection to the Democratic Party.

A week ago on State of the Union, Sestak questioned whether Specter was a Democrat yet. That criticism was shortly followed by Sestak suggesting that even if Specter won in 2010, he might not be a reliable member of the Democratic Party in 2016.

Pennsylvania Democrat Joe Torsella, who announced his intention to run before Specter’s party switch, has said he is staying in the race and will challenge Specter for the Democratic nod.

Former Pennsylvania Gov. Tom Ridge, a Republican who was considered a potentially formidable challenger to Specter in a general election match-up, recently announced that he will not run for election to the Senate in 2010.

Casey to back Specter in Senate race

[cnn-photo-caption image= http://i.cdn.turner.com/cnn/2008/images/03/28/art.casey.gi.jpg caption="Casey will back Specter in the 2010 Democratic primary."]
WASHINGTON (CNN) – Pennsylvania Sen. Bob Casey said Friday that he would support Sen. Arlen Specter in the 2010 primary, and was hopeful that Democrats would clear the field for the Republican-turned-Democrat.

Specter already has one opponent in the primary, Joe Torsella, who announced his intention to run for the Senate before Specter switched parties. Democratic Rep. Joe Sestak also has not ruled out a run for the seat.

But Casey said on The Bill Press Show Friday morning that he hopes his party can reach a "consensus" and rally behind Specter to prevent Republicans from winning the race.

"I hope we can achieve some kind of consensus because I think he is the strongest candidate and I believe we've gotta try to make sure we elect a Democrat and don't let dissension or disunity allow a Republican to walk in," Casey said. 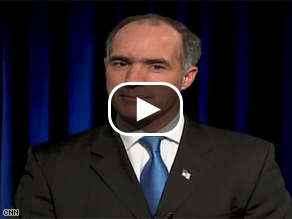 WASHINGTON (CNN) -– Pennsylvania Sen. Bob Casey, Jr., a supporter of Sen. Barack Obama, is defending the Illinois senator and front-runner for the Democratic presidential nomination in the middle of a controversy that has the potential to effect the outcome in Pennsylvania's April 22 primary. (Related video: Watch John King on the potential impact of the controversy.)

“Ridiculous,” is how Casey responded to suggestions that Obama is an elitist. “Anyone who knows Barack Obama, knows his life story, knows that that’s not true,” Casey added.

“Here’s the larger point,” Casey told CNN’s Wolf Blitzer on Late Edition Sunday. “He was trying to express the frustration that people feel not only with this economy but with what’s been happening in Washington where the special interests have had a stranglehold on the process in Washington.”

Casey also took a shot at Sen. John McCain, the Republican Party’s presumptive nominee, saying “the McCain campaign is about a third Bush term.” “I don’t think people are going to vote for that. I think they’re going to vote for change,” said Casey.

The Pennsylvania senator also told Blitzer that people in his state are not going to judge Obama on the basis of a single comment.

Pennsylvania Sen. Bob Casey announced his support of Obama's White House bid on Friday at an event in Pittsburgh, Pennsylvania. It's an endorsement that could give the Illinois senator a boost in the crucial primary state that votes April 22.

"He started this campaign as an underdog, but he knows what it's like to be a fighter," Casey said. "I've been impressed by so much watching this campaign ... impressed by his compassion, his strength, his ideas and I think especially ... under fire."

Casey told the crowd that he called Sen. Hillary Clinton on Thursday night to inform her of the decision. "She was gracious ... and we know that she's a great senator, she's a great leader," Casey added.

Obama accepted Casey's endorsement, saying "Bob is such gracious person. I did not press him on this endorsement. There are others I press," he said.

He said Casey's endorsement "meant more to me as any endorsement I've received on the trail because I knew it was coming from the heart."

[cnn-photo-caption image= http://i.cdn.turner.com/cnn/2008/images/03/28/art.casey.gi.jpg caption=" Casey will endorse Obama Friday."](CNN) - Pennsylvania Sen. Bob Casey will announce his support of Barack Obama's White House bid Friday, an endorsement that could give the Illinois senator a boost in the crucial primary state that votes April 22.

The official endorsement is expected to come later Friday as Obama begins a week-long campaign-swing through the state. Several recent polls suggest Hillary Clinton appears to hold a double-digit lead there.

Casey is a first-term senator and son of a popular former governor of the state, Bob Casey, Sr. A prominent catholic, Casey's support could help Obama make inroads among catholic voters in the state - a voting bloc that has favored Clinton in most other primary contests.