Republican Leader John Boehner (Ohio) went after the Obama administration for wanting to let the Bush tax cuts expire in January for the wealthy ($250,000 and up households). He argued GOP economics 101: Don’t raise taxes in a struggling economy. Asked repeatedly, Boehner would not say whether keeping those tax cuts in place simply adds to the deficit republicans are so eager to reduce. It may be time to posit the question: In arguing for keeping tax cuts for the wealthy, has the GOP found a potent election year issue or are they boxing themselves in?
END_OF_DOCUMENT_TOKEN_TO_BE_REPLACED

But Allen quickly added that where the energy giant’s performance has been lacking is in having a human touch.
END_OF_DOCUMENT_TOKEN_TO_BE_REPLACED

A 'slush fund' no more, apparently

Last month, the Texas Republican came under intense criticism from members of his own party and was forced to issue an apology after calling BP's agreement to set up a $20 billion fund for victims of the Gulf oil spill "a shakedown" by the Obama administration. Despite the apology, Democrats used the comments to spark fundraising and gain political ground.

Barton, who also called the $20 billion a "slush fund," came face-to-face Tuesday with Kenneth Feinberg, the independent special master of the fund, and prefaced his first question with an emphatic message.

END_OF_DOCUMENT_TOKEN_TO_BE_REPLACED 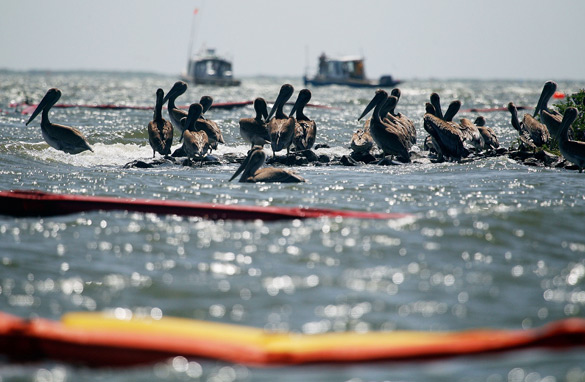 According to a new CNN poll, 33 percent of the public says the situation in the Gulf region is under control. (PHOTO CREDIT: Getty Images)

Washington (CNN) - On day 95 of the massive oil spill in the Gulf of Mexico, a new poll indicates that two-thirds of Americans think the situation is still out of control, but the number who say that things are getting worse in the Gulf Coast region has dropped 30 points since June.

"Optimism about the situation in the Gulf has grown most among women," says CNN Polling Director Keating Holland. "Last month, only 35 percent of women thought the situation there had stabliized; now that is up to 60 percent. The number of men who think things have stabilized also grew since June, but only by 12 points, to 55 percent."

END_OF_DOCUMENT_TOKEN_TO_BE_REPLACED

New York (CNNMoney.com) - BP is still among the biggest suppliers of fuel to the U.S. military, and the Defense Department has no plans to stop awarding the company lucrative contracts.

As of last week, BP has been awarded 17 contracts valued at just under $1 billion, the Defense Logistics Agency (DLA) said. That makes BP the third-largest supplier of fuel to the armed services so far this fiscal year.

In fiscal 2009, the DLA granted BP a total of 26 contracts valued at $2.2 billion, or nearly 12% of overall fuel purchases, making it the military's largest fuel supplier that year.

[cnn-photo-caption image= http://i2.cdn.turner.com/cnn/2010/images/07/13/art.spill.sat.gi.jpg caption ="The Obama administration has sent another bill to BP and other parties in the aftermath of the Deepwater Horizon oil spill."](CNN) - The Obama administration has sent a fourth bill for $99.7 million to BP and other responsible parties relating to the energy company's oil spill, according to a statement from the Deepwater Horizon Incident Joint Information Center.

The government said BP is financially responsible for all costs associated with the response to the spill, including efforts to stop the leak at its source, reduce the spread of oil, protect the shoreline and mitigate damages, as well as long-term recovery efforts for individuals and communities.

The government bills BP and other parties regularly for costs incurred by the federal on-scene coordinator to support federal, state and local response efforts and ensure the Oil Spill Liability Trust Fund is reimbursed on an ongoing basis.

[cnn-photo-caption image= http://i2.cdn.turner.com/cnn/2010/images/07/13/art.megrahi.file4.ukpool.jpg caption ="Convicted Pan Am bomber Abdelbaset al Megrahi boards a plane in Scotland to make his final trip home to Libya on August 20."](CNN) - A group of U.S. lawmakers have called for an investigation into whether BP may have played a role in lobbying for the release of Abdelbaset al Megrahi to secure an oil contract with the Libyan government.

Megrahi, now 58, was convicted and sentenced to life in prison for the 1988 bombing of Pan Am Flight 103 which killed 270 people, including 189 Americans.

He was released from a Scottish prison on compassionate grounds in August after he was diagnosed with prostate cancer.

"Reports have surfaced indicating that a 2007 oil agreement may have influenced the U.K. and Scottish governments' positions concerning Mr. Megrahi's release in 2009," wrote Democratic Sen. Frank Lautenberg of New Jersey in a letter to the Senate Committee on Foreign Relations on Monday.

(CNN) - The presidential commission tasked with investigating the Gulf oil gusher and making recommendations about the future of offshore drilling will hold its first public meeting Monday.

The National Oil Spill Commission has six months to determine what happened when the Deepwater Horizon oil rig exploded April 20, leading to the worst environmental disaster in U.S. history - and how to prevent something similar from ever happening again.

Committee co-chairman, William K. Reilly, said it was hard to believe that more progress has not been made in responding to oil spills.

Click to watch video
Washington (CNN) – The man charged with independently administering the $20 billion fund set up to compensate for damage caused by the Gulf oil disaster said Sunday that he is prepared to provide up to six months in emergency compensation without the requirement of releasing BP from liability.

In an appearance on CNN’s State of the Union, attorney Kenneth Feinberg said he expected to have his independent compensation program running by the first week of August. Feinberg told CNN Chief Political Correspondent Candy Crowley that his operation will be superimposed on top of the claims process already put in place by BP, which has more than 1,000 people working out of 35 offices in the Gulf Coast region.

“We’ll keep the people who are good. We’ll add people. We’ll accelerate claims. We’ll process the claims as quickly as we can,” Feinberg said. “We’re already prepared to give eligible claimants not one month emergency payments but six months with no obligation, no release required. Just to try and help people in the Gulf.”

Feinberg described the six-month payouts as providing “some degree of additional financial certainty” for the many individuals and businesses facing the economic havoc caused by the disaster. But Feinberg added that claimants can ask for less than six months in compensation if they so choose.

The well-known attorney, who administered the multi-billion-dollar 9/11 victims’ compensation fund and who set salaries for the top executives at banks recently bailed out by the federal government, also provided an overview of how he sees the claims process.

Holder suggests companies beyond BP are being investigated

Aspen, Colorado (CNN) – Attorney General Eric Holder suggested Thursday that the Justice Department might not only be focused on BP in its Gulf Coast oil spill investigation.

"For people to conclude that BP is the focus of this investigation might not be correct," Holder added.