Washington (CNN) – The Democratic National Committee is rolling out a new television commercial that criticizes two Republicans – one for his comments on the Gulf oil spill and the other for his recent comments about Capitol Hill's response to the financial crisis that began in late 2008.

The ad hits House Minority Leader John Boehner, R-Ohio, over his comments last week to the Pittsburgh Tribune-Review, where he said the financial regulatory overhaul favored by Democrats amounted to "killing an ant with a nuclear weapon."

The other Republican criticized in the ad is Texas Rep. Joe Barton – who endured weeks of criticism after he apologized to BP over the $20 billion account to pay damages claims that the company created at the request of President Barack Obama.

The 30-second spot will start airing Tuesday on cable stations.

[cnn-photo-caption image= http://i2.cdn.turner.com/cnn/2010/images/07/02/art.oilad.youtube.jpg caption="Bradley Byrne's campaign ad criticizes both President Obama and BP."]Washington (CNN) – The oil gushing into the Gulf of Mexico is spilling onto the television airwaves in the form of political commercials as candidates and interest groups seek to use this economic and environmental disaster to advance their campaigns and causes.

So far, more than $4.3 million has been spent on political TV ads that reference the oil spill caused by the explosion in April of the Deepwater Horizon oil rig operated on behalf of BP.

The commercials appear in state and congressional races as well as in states where organizations are seeking to pressure U.S. senators to support comprehensive energy reform legislation, according to a new analysis conducted for CNN by Kantar's Campaign Media Analysis Group.

END_OF_DOCUMENT_TOKEN_TO_BE_REPLACED

(CNN) - The U.S. Coast Guard and Environmental Protection Agency have issued a directive to BP on how the company should manage recovered oil, contaminated materials and waste recovered in cleanup operations from the oil disaster in the Gulf of Mexico.

Among other requirements, the directive requires the oil giant to give the EPA and state agencies access to any waste storage site and to provide specific plans, waste reports and tracking systems for liquid and solid waste.

"While the states of Louisiana, Alabama, Mississippi and Florida are overseeing BP's waste management activities and conducting inspections, this action today is meant to compliment their activities by providing further oversight and imposing more specific requirements," the Coast Guard said on Thursday. "Under the directive, EPA, in addition to sampling already being done by BP, will begin sampling the waste to help verify that the waste is being properly managed."

Waste sampling to date has been done in compliance with EPA and state regulatory requirements, the Coast Guard said.

The document is a sole-source contract seeking to secure the services of the Woods Hole Oceanographic Institution, described by the Coast Guard as "well known" in the oil spill field and a company that "routinely operates at depths required" at the BP site.

Woods Hole submitted proposed technology to BP in May designed to provide an accurate flow-rate estimate from the ruptured undersea well after the oil company provided its own numbers inconsistent with those of scientific experts, the document shows.

The institution's technological capabilities at the site include sonar, optical, Doppler and mass spectrometer varieties of sensors, according to the Coast Guard.

[cnn-photo-caption image= http://i2.cdn.turner.com/cnn/2010/images/06/23/art.getty.bobby.jindal.jpg caption="Gov. Bobby Jindal said Wednesday the fight to protect shorelines 'is a war.'"](CNN) - Louisiana Gov. Bobby Jindal had harsh words for government authorities on Wednesday after sand-dredging operations to protect the state's coastline from the BP oil disaster were halted due to environmental concerns.

"This is a war," Jindal said of the fight to protect shorelines from the approaching oil. "Every hour, every day matters. Maybe they don't see the oil from Washington (but) we see it every day on our coast."

Jindal called on the U.S. Fish and Wildlife Service and the Army Corps of Engineers to let workers resume dredging off the Chandeleur Islands. The dredging would be followed by construction of berms in hopes the offshore berms would block oil before it hit the beach.

The issue stems from the original proposal Louisiana submitted for the project, which raised concerns among scientists and wildlife officials about its proximity to the state's sensitive barrier islands, said Tom Strickland, the assistant Interior Secretary for Fish, Wildlife and Parks.

New Orleans, Louisiana (CNN) - Interior Secretary Ken Salazar on Tuesday called a six-month halt on deepwater drilling "needed, appropriate and within our authorities" in announcing he will issue a new order on a moratorium just hours after a federal judge blocked such a mandate.

"We see clear evidence every day, as oil spills from BP's well, of the need for a pause on deepwater drilling," Salazar said in a statement. "That evidence mounts as BP continues to be unable to stop its blowout, notwithstanding the huge efforts and help from the federal scientific team and most major oil companies operating in the Gulf of Mexico."

Salazar's statement did not give an exact date for when the new order would be imposed, saying only "in the coming days." 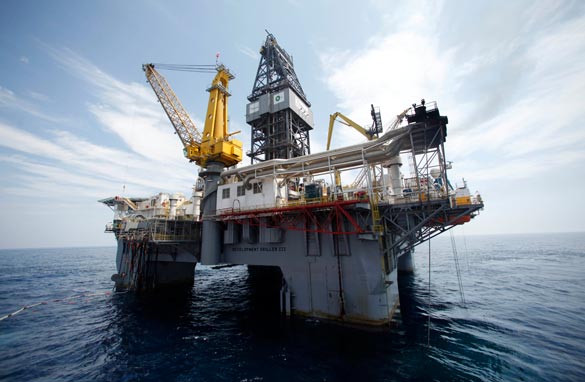 A federal judge in New Orleans, Louisiana, has blocked a six-month federal moratorium on deepwater drilling in the Gulf. The federal government will appeal the ruling, according to White House Press Secretary Robert Gibbs. (PHOTO CREDIT: Getty Images/File)

(CNN) - A federal judge in New Orleans, Louisiana, has blocked a six-month federal moratorium on deepwater drilling in the Gulf.

Several dozen plaintiffs had sued President Barack Obama's administration, arguing the ban would create long-term economic harm to their businesses. Obama ordered the moratorium after the April 20 explosion of an oil rig off Louisiana that killed 11 people and triggered an underwater oil gusher.

DNC out with second 'Barton-BP' ad

The new ad includes video of GOP Senate nominee Rand Paul of Kentucky, Republican Rep. Michele Bachmann of Minnesota, House Minority Whip Eric Cantor of Virginia, and Barton apparently sticking up for BP, saying the Administration should "stop demonizing BP," that holding the oil company accountable is "un-American" and that the escrow fund is "extortion" and a "shakedown."

Barton, the senior Republican on the House Energy and Commerce Committee, ignited a political firestorm Thursday, during questioning of BP chief Tony Hayward, when he called BP's agreement to set up a $20 billion fund for spill victims "a shakedown" by the Obama administration. And Barton apologized to BP.

Barton's remark drew immediate criticism from Democrats and even Republicans. Under pressure from House GOP leaders, Barton later retracted his apology to BP and said he was sorry for using the term shakedown.

In an e-mail Friday morning to supporters, the DNC asked for donations to begin running a television commercial ad targeting Barton's remarks. The DNC says those contributions led to the airing of a first commercial on national cable TV, which said "Republicans apologizing to BP? Tell Republicans: Stop apologizing to big oil."

The DNC says the new ad, titled "How Republicans Would Govern," will also run on national cable. Democratic officials say the message of the ad is that the Barton apology to BP was not a gaffe or isolated incident but rather the Republican approach and an indication of how the GOP would govern if it wins back control of Congress in November's midterm elections.

END_OF_DOCUMENT_TOKEN_TO_BE_REPLACED

[cnn-photo-caption image= http://i2.cdn.turner.com/cnn/2010/images/06/21/art.coburn.cnn.jpg caption="Sen. Tom Coburn declined to criticize Rush Limbaugh for his insistence that the administration's pressure on BP amounted to a 'shakedown'."]Washington (CNN) - A respected conservative senator, who is often critical of the Obama administration, declined Monday to criticize the administration's pressuring BP to establish a $20 billion escrow fund to help victims of the oil spill.

At the same time, Sen. Tom Coburn, R-Oklahoma, declined to criticize Rush Limbaugh for his insistence that the administration's pressure on BP amounted to a "shakedown."

Coburn was asked about Limbaugh's repeating that the $20 billion fund was a "shakedown." The conservative talk-radio host took aim at Republican leaders for rushing to demand that Rep. Joe Barton, R-Texas, retract his controversial apology to BP CEO Tony Hayward during last week's congressional hearing.