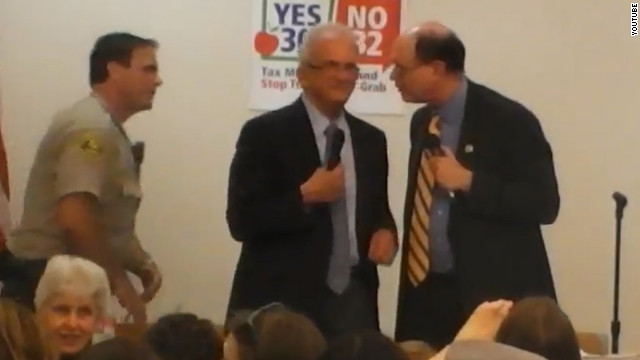 A fracas? Congressional debate gets ugly

(CNN) – Though it didn't come to fisticuffs, so heated was the exchange between the two debating candidates for a San Fernando, California congressional seat Thursday night that a police officer got up on stage to separate the two.

During the debate Thursday at Pierce College in Woodland Hills, two incumbent Democratic congressmen -Rep. Brad Sherman and Rep. Howard Berman- got into a verbal disagreement over the correct author of the immigration legislation known as the DREAM Act.
END_OF_DOCUMENT_TOKEN_TO_BE_REPLACED

[cnn-photo-caption image= http://i2.cdn.turner.com/cnn/2010/images/04/22/art.sherman0422.cnn.jpg caption="Rep. Brad Sherman said Thursday that a provision in the Senate bill will be changed to limit the amount of money the FDIC can borrow in order to resolve a failing financial institution."]
Washington (CNN) – The Democratic lawmaker taking the lead in crafting the Senate’s financial regulatory reform bill has agreed to a key change that would limit taxpayers’ exposure if the government must step in to wind down a large, failing financial institution, a key House Democrat said Thursday.

Rep. Brad Sherman, D-California, who sits on the House Financial Services Committee, told CNN that Sen. Chris Dodd, chairman of the Senate Banking Committee, has agreed to change a provision in the Senate bill to limit the Federal Deposit Insurance Corporation to borrowing no more than 90 percent of the value of the assets of a failing firm.

“The senator has agreed to changes that would prevent borrowing by the FDIC that could have been enormous,” Sherman said on CNN’s John King, USA.

With the change, explained Sherman, “when [the FDIC] takes over a defunct entity, they’ll only be able to borrow 90 percent of the value of the assets they’ve taken over so that they have the liquidity to wind that entity up.”