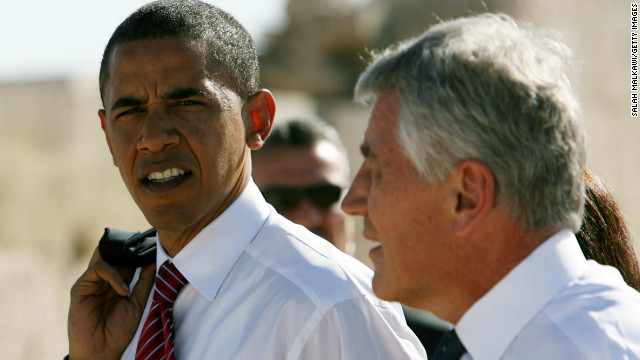 Two sources close to Hagel have also been told to expect the defense secretary announcement on Monday, and additional sources - a senior administration official and a source familiar with the nomination - said Obama spoke to Hagel Sunday by telephone.
END_OF_DOCUMENT_TOKEN_TO_BE_REPLACED

Washington (CNN) - Several senior administration officials tell CNN UN Ambassador Susan Rice's use of the word "spontaneous" on Sunday talk shows five days after the Libya incident came directly from an assessment provided to the House intelligence community by the CIA, which was not edited by the White House.

The officials maintain the criticism is a result of a poor word choice rather than a true difference in representing what was known about the attack at the time. Several officials say instead of calling it "spontaneous" - it might have been better phrased as: the attack had not been long planned; or there were no signs of an upcoming attack on September 11th.
END_OF_DOCUMENT_TOKEN_TO_BE_REPLACED

Drone program something you 'struggle with,' Obama says

"That's something that you have to struggle with," the president said in a CNN interview at the White House conducted for the documentary "Obama Revealed: The man, The President" by this reporter. He continued, "if you don't, then it's very easy to slip into a situation in which you end up bending rules thinking that the ends always justify the means. That's not been our tradition. That's not who we are as a country."
END_OF_DOCUMENT_TOKEN_TO_BE_REPLACED

The spy who loved Ron Paul

Michael Scheuer pulled no punches in throwing his support behind and encouraging Iowans to vote for Rep. Paul.

Washington (CNN) - Gen. David Petraeus told his Senate confirmation hearing Thursday that "I wanted this job" as he explained his willingness to retire from the military after 37 years to become CIA director.

The 58-year-old commanding general of U.S. forces in Afghanistan told the Senate Intelligence Committee he would lead the nation's largest intelligence agency fully independent of his ties to the military.
END_OF_DOCUMENT_TOKEN_TO_BE_REPLACED

WikiLeaks says it will release CIA paper on Wednesday

The website set off a firestorm of controversy recently when it posted  some 76,000 U.S. documents related to the war in Afghanistan. The group has  said it has another 15,000 documents, which it plans to release soon.

It was not immediately clear whether the Twitter post on Tuesday is  related to the batch of documents that WikiLeaks has called the "Afghan War  Diary."

Founder and editor of the website, Julian Assange, was arrested in  absentia last week in Sweden on charges of rape. The warrant was revoked less  than a day later by Chief Prosecutor Eva Finne.

Separately on Tuesday, the attorney for the alleged victims told CNN  rumors that the Pentagon or CIA was somehow involved in the sex crime  accusations against Assange are "complete nonsense."

Panetta: Afghan war has problems, but progress being made

Washington (CNN) - CIA Director Leon Panetta said Sunday that the war in Afghanistan had "serious problems," but the U.S.-led mission was making progress.

"It's harder, it's slower than I think anyone anticipated," said Panetta, the nation's top intelligence officer, in a rare media interview with the ABC program "This Week."

He cited governance problems, drug trafficking and the Taliban insurgency - all in a tribal society - as the major challenges to the goal of "making sure al Qaeda never finds another safe haven from which to attack this country."

"Winning in Afghanistan is having a country that is stable enough to ensure that there is no safe haven for al Qaeda or for a militant Taliban that welcomes al Qaeda," Panetta said.

Obama delivered the remarks during a memorial service at CIA headquarters in Langley, Virginia. The service was closed to the media to protect the identities of undercover officers in attendance. A transcript of Obama's speech was provided to members of the press.

"There are no words that can ease the ache in your hearts," Obama told families, friends and co-workers of the seven officers. "But to their colleagues and all who served with them - those here today, those still recovering, those watching around the world, I say: Let their sacrifice be a summons. To carry on their work. To complete this mission. To win this war, and to keep our country safe."

A suicide bomber killed the CIA officers, as well as a Jordanian intelligence official, on December 30 at a U.S. base in Khost, in southeastern Afghanistan.

END_OF_DOCUMENT_TOKEN_TO_BE_REPLACED

The president will also meet with his deputy national security adviser, John Brennan.

Obama returned to Washington on Monday at the conclusion of the first family's Hawaii holiday vacation.