(CNN) - David Axelrod, senior strategist for President Barack Obama's re-election campaign, responded Thursday to GOP attacks against the president from the CNN Arizona Republican Presidential Debate and described the candidates as "all hat, no cattle."

"It seemed like such a negative grinding affair, going after each other, going after the president and certainly going after the country," Axelrod said in an interview on CNN's "The Situation Room with Wolf Blitzer." "That was a dispiriting thing to watch."
END_OF_DOCUMENT_TOKEN_TO_BE_REPLACED

Romney: 'I wonder which team Santorum was taking it for'

Phoenix (CNN) - Picking up where he left off after CNN's GOP debate in Mesa, Mitt Romney went back on the attack, turning Rick Santorum's own words against him.

Speaking to a business group in Phoenix Thursday, Romney recalled Santorum's explanation for why he supported the No Child Left Behind law during his time in the Senate.
END_OF_DOCUMENT_TOKEN_TO_BE_REPLACED

During the debate, Romney defended Arizona's controversial 2010 illegal immigration law, saying, "You know, I think you see a model here in Arizona."
END_OF_DOCUMENT_TOKEN_TO_BE_REPLACED

(CNN) - Newt Gingrich criticized the chairman of the joint chiefs of staff for characterizing Iran as a "rational actor" in international affairs and defending the possibility of preventing an Israeli attack on Iranian nuclear sites, during Wednesday night's Republican candidates debate hosted by CNN and the Republican Party of Arizona.

(CNN) - Rick Santorum pointed out the growth of government benefits compared to defense spending during Wednesday night's Republican candidates debate in Mesa, Arizona, hosted by CNN and the Republican Party of Arizona.

Mesa, Arizona (CNN) - The four GOP presidential candidates had one last chance to state their case in front of the nation before Tuesday's primaries in Arizona and Michigan.

Did one candidate stand out from the rest? Here are five things we learned from the CNN Arizona Republican Presidential Debate.

Mesa, Arizona (CNN) - Rick Santorum found that his position at the top of polls made him the biggest target in Wednesday's CNN Republican presidential debate, possibly the last of the GOP primary and caucus campaign.

Mitt Romney, who has been front-runner off and on through the campaign but saw his momentum blunted by Santorum's recent surge, went after the former Pennsylvania senator over his record in Congress, trying to shoulder past him before Tuesday's primaries in Arizona and Michigan, which most polls show neck-and-neck between the two. 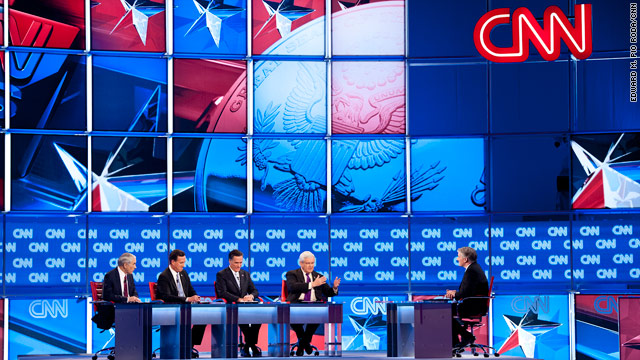 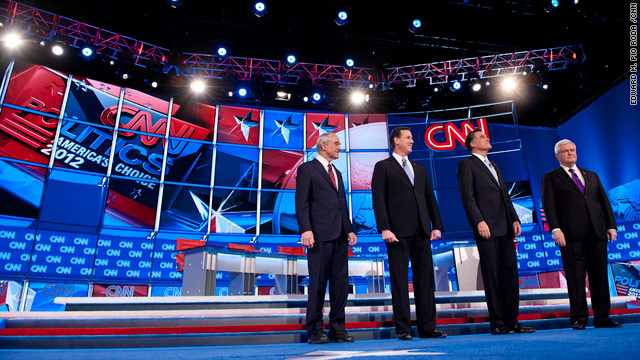 (CNN) - The CNN Political Ticker is live blogging the CNN Arizona Republican Presidential Debate in Mesa. Check here for live updates throughout the event and be sure to follow @PoliticalTicker, @CNNPolitics and use #CNNDebate.

10:33 p.m. ET - Read a transcript from the fourth part of tonight's debate here. The full transcript is posted here.

10:18 p.m. ET - From @SarahPalinUSA: Newt's message on energy development was spot-on. Drill now and stop bowing to foreign regimes begging them to do it for us. Then we'll all be "cheerful."

10:11 p.m. ET - Arizona Gov. Jan Brewer tells Borger the debate made it harder for her to choose a candidate to endorse. She said Gingrich's answer on immigration was strong, particularly his pledge to work with governors of border states.