The ‘Real World’ reality star and Republican activist was dining at the CNN Grill Wednesday evening with her three-month old newborn in tow. Campos-Duffy, like Palin, is a mother of five.

“I think before, maybe we could’ve won, but I think that now we have a real, really good shot at it. I really do,” Campos-Duffy said of Palin on the ticket.

“I don’t really have a lot in common with Hillary Clinton. I have a heck of a lot more in common with this woman, and I think that most people I know, Democrat or Republican, would say the same thing.”

The conservative blogger, a frequent contributor to a parenting site, says 17-year-old Bristol Palin’s decision to have her baby only puts a “stamp on [the family’s] pro-life credentials.”

“They say that pro-choice is sort of the women’s position, but I think that women’s positions on choice are really softening,” Campos-Duffy said. “When [women] have had 40 ultrasounds, had babies, and seen spina bifida operations done in utero, I think there’s a lot more softening about women’s decisions.”

Pat Boone: Why Obama is 'The Big Zero'

[cnn-photo-caption image= http://i2.cdn.turner.com/cnn/2008/images/09/04/art.pat.boone.rnc.jpg caption="Musician Pat Boone says the McCain-Palin ticket will be a strong one for Republicans."]
ST. PAUL, Minnesota (CNN) – With more top 40 hits than Madonna or Billy Joel, rock and roll legend Pat Boone is considered by many as “The Original American Idol.”

So when the squeaky clean singer-songwriter waltzed into The CNN Grill at the Republican National Convention in St. Paul for a bite to eat, we couldn’t resist the opportunity to ask the lifelong conservative how he thinks the race is shaping up and whether he has an apropos song for this year’s historic election.

[cnn-photo-caption image= http://i2.cdn.turner.com/cnn/2008/images/09/04/art.cindy.adams.rnc.jpg caption="Cindy Adams spoke with CNN."]
ST. Paul, Minnesota (CNN) – After rubbing shoulders with Susan Sarandon, Danny Glover, Charlize Theron, and Charles Barkley at the Democratic National Convention in Denver, New York Post celebrity gossip columnist Cindy Adams jetted off to “one of the dullest towns in America,” according to her latest column, to sniff out politically-inclined celebs in St. Paul.

What does McCain running mate Sarah Palin have in common with an Alaskan salmon? And who will win November? Just a few of the five questions we put to the woman famous for knowing famous people over dinner at The CNN Grill.

LISTEN to Cindy Adams compare Palin to an Alaskan salmon

The dinner served as a sign that the McCain camp is letting bygones be bygone after a tough interview by CNN's Campbell Brown earlier this week that lead to the cancellation of Republican nominee John McCain's scheduled appearance on Larry King Live.

When asked about his experience on CNN, McCain campaign spokesman Tucker Bounds said the network was "topnotch."

"I'm enormous fan of Campbell. I have a great time when I'm on with you guys," Bounds said. "Campbell is a consummate professional and I thought it was a great interview. It kind of went a little long, but we had a good time."

Bounds, McCain campaign press secretary Jill Hazelbaker, and Senior Advisor Mark Salter were among those that held court at The CNN Grill both before and after vice presidential candidate Sarah Palin's address to the Republican National Convention. 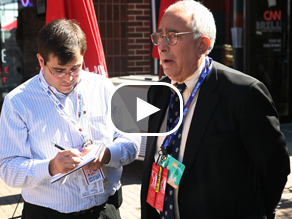 Ben Stein of “Ferris Bueller” fame is beside himself over Sen. John McCain’s choice for vice president.

“I’m confused and disturbed by the GOP choice of Sarah Palin,” the economist said Wednesday outside The CNN Grill at the Republican National Convention.

Stein was hoping for someone with more experience like Minnesota Gov. Tim Pawlenty, who was considered to be on the shortlist of McCain’s potential running mates.

But don’t expect Stein to defect to the left.

“Obama doesn't have enough experience and Biden just isn't smart enough,” he said. "We need someone smart and we haven't had a smart president in a long time. Well, I guess Clinton was smart.

Stein is an author and former speechwriter for Presidents Richard Nixon and Gerald Ford,

"The grill is great.... I had a Cheeseburger and a Grey Goose Martini".

When asked by if this was the best race he ever covered he said "no, 1968 and Bobby Kennedy".

[cnn-photo-caption image= http://i2.cdn.turner.com/cnn/2008/images/09/02/art.tommythompson.cnn.jpg caption="Thompson stopped by the CNN Grill Tuesday."]"This place is great", Said Tommy Thompson the former governor of Wisconsin and U.S. Secretary of Health and Human Services, as he looked around the CNN grill. Thompson stopped by CNN's all-in-one production and hospitality convention headquarters to do an interview on CNN.

Thompson seemed as excited abut CNN's Grill as he was about GOP VP nominee Sarah Palin: "She is energized at the base, and she energizes the party...you know the media is making a big deal about things....we'll get past all this."

He said he has been busy over the last few nights with GOP business, raising money for the group Friends of New Orleans, and hanging out with singer LeAnn Rimes after she performed at a Florida delegation party sponsored by Thompson's law firm.

If he had time to sit down, I asked what he would order off the CNN Grill original menu. "I'd get the Walleye Sandwich and the Cobbler A La Mode....I wish I had time to eat".

Stay tuned for more from The CNN Grill.

Accompanied by his producer "Miles," Jones stopped by CNN's RNC headquarters for a brew and snack before hitting the edit bay to prep for last night’s show. Rumor has it they spoke with CNN's Dana Bash. When asked if they were planning on taking a jab at our grill, Jones said "he enjoyed coming here too much," They also gave the "CNN Brew," CNN's original beer, a thumbs up. 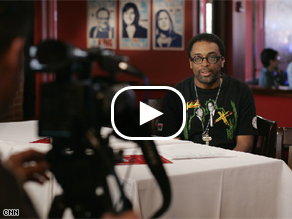 Spike Lee has never been shy about expressing his views on politics, and CNN.com Live's Melissa Long talks to the film director about the Democratic National Convention and Barack Obama's candidacy.

Live from the CNN Grill

DENVER (CNN) - Tonight the CNN Grill was hopping with appearances by Oscar winning actors, Tony award winners, comedians, NBA Hall of Famers, and U.S. political royalty. Sir Charles Barkley chatted up Ashley Judd at her table while Charlize Theron enjoyed the light breeze outside on the patio with beau Stuart Townsend. Tony award winner Idina Menzel, also sat down for a bite at the table next to Ashley Judd. Repeat customer Maria Shriver sat at her table from Monday night. Chad Hurley, YouTube founder, hobnobbed with his fellow celebs.

Earlier in the day, Rosario Dawson, Hill Harper and the band Death Cab for Cutie all swung by for a visit.