BREAKING … ISRAEL SAYS CEASE-FIRE VIOLATED: For 70 hours, there was relative peace. But - as has proven true time and again in relations between Israel and Hamas-controlled Gaza - it didn't last. Two hours before a 72-hour cease-fire was to expire, and as talks continued in Egypt aimed at extending it, an Israeli military spokesman told CNN that a rocket from "Gaza terrorists" struck in the Hof Ashkelon area of southern Israel on Wednesday night. There were no initial reports of injuries or damage. – Jethro Mullen, Antonia Mortensen and Reza Sayah
END_OF_DOCUMENT_TOKEN_TO_BE_REPLACED 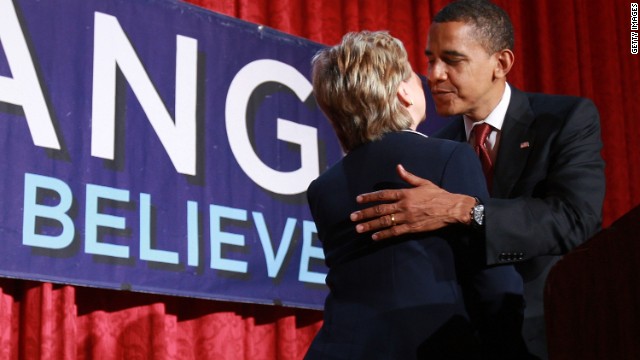 In his tweet, Axelrod appears to be knocking Clinton's 2002 vote as U.S. senator in favor of the Iraq War.
END_OF_DOCUMENT_TOKEN_TO_BE_REPLACED

HAPPENING NOW … President Obama to speak about Iraq at 4:45pm from Martha’s Vineyard. Tune in live on CNN.

WITH VOCAL SUPPORT OF ISRAEL, CLINTON RANKLES PRO-PALESTINIAN AMERICANS … Hillary Clinton has been upfront about her support for Israel's recent military operations in Gaza. And her outspokenness is infuriating pro-Palestinian supporters in the United States. Since Israel kicked off Operation Protective Edge against Hamas in early July, Clinton has strongly and repeatedly said she backs Israel's right to defend itself. She stepped up that message in a recent interview with The Atlantic, in which she charged Hamas for "stage-managing" the conflict to engender sympathy. – Dan Merica
END_OF_DOCUMENT_TOKEN_TO_BE_REPLACED

JUST IN … U.S. MILITARY LAUNCHES SECOND ROUND OF AIRSTRIKES IN IRAQ:  The U.S. military has begun a second round of airstrikes against ISIS near Irbil, U.S. officials told CNN on Friday afternoon. News of the latest airstrikes came just after the governor of Irbil, Nawzad Hadi, told CNN that ISIS fighters may be as close as 30 kilometers to Irbil. Air strikes are "very important" because ISIS fighters are well armed and are outgunning the Kurdish forces, thanks to the weapons the militants seized from the Iraqi military in Mosul, Hadi said. During that second airstrike, four U.S. fighter jets struck an ISIS convoy of seven vehicles, according to Pentagon spokesman Rear Adm. John Kirby. The warplanes dropped four laser-guided bombs, Kirby said.
END_OF_DOCUMENT_TOKEN_TO_BE_REPLACED

BREAKING … WALSH DROPS OUT OF MONTANA SENATE RACE: Sen. John Walsh dropped out of the Senate race in Montana on Thursday amid allegations of plagiarism, a senior Democratic source familiar with the senator's thinking confirmed to CNN. The move further hurts Democratic chances of maintaining control of the Senate. Republicans need a net gain of six seats in November for that to occur. The Democrat is accused of not properly attributing certain material in a paper to complete his master's degree at the Army War College. – Dana Bash

U. S. CONSIDERS 'OTHER MILITARY OPTIONS' IN IRAQ … The United States is considering "other military options" beyond air drops to aid minorities trapped by fighting in northern Iraq, U.S. officials tell CNN. The Obama administration is talking with officials in Baghdad and Erbil and is looking at options to provide humanitarian support, including but not limited to Iraqi government air drops, one official said. A senior State Department official said the United States also is weighing opening a humanitarian corridor, providing support to Kurdish and Iraqi forces. – Elise Labott and Jim Sciutto
END_OF_DOCUMENT_TOKEN_TO_BE_REPLACED

‘READY FOR WARREN’ REGISTERS AS PAC, TARGETS IOWA … Massachusetts Sen. Elizabeth Warren says she's not seeking the White House, but her supporters are still gearing up for a potential run. On Wednesday, ‘Ready for Warren’ announced it has registered as a PAC in hopes of expanding the group’s grassroots outreach effort. “At the moment, one thing that (the outreach plan) includes is building our operation in Iowa so we can hire a Ready for Warren organizer to talk with Iowans about the campaign and hear about what kind of candidate they want to caucus for in 2016,” Ready for Warren campaign manager Erica Sangras told CNN in a statement. Sangras says she’s heading to the Hawkeye State on Thursday to meet with Warren supporters at the Iowa State Fair.
END_OF_DOCUMENT_TOKEN_TO_BE_REPLACED

U.S. GENERAL KILLED IN AFGHANISTAN … An American general was killed Tuesday after a shooter wearing an Afghan military uniform opened fire at a training facility in Kabul, U.S. officials told CNN. The gunman, who was killed, was believed to be an Afghan soldier who had served for some time, according to a Pentagon official. At least 15 coalition troops, including other Americans, were wounded in the attack, U.S. officials said. – Ashley Fantz and Jim Sciutto
END_OF_DOCUMENT_TOKEN_TO_BE_REPLACED

BREAKING … ISRAEL, PALESTINIANS AGREE TO 3-DAY CEASE-FIRE: Israeli government spokesman Mark Regev tells CNN’s Jake Tapper that Israel has agreed to a three-day cease-fire proposed by Egypt. A Palestinian delegation has also agreed to the cease-fire, according to senior Hamas official Izzat Risheq. The ceasefire starts 1am EST, or 8am local time.
END_OF_DOCUMENT_TOKEN_TO_BE_REPLACED

OBAMA: ISRAELI SOLDIER MUST BE RELEASED … President Barack Obama said an Israeli soldier captured in the Gaza conflict must be released unconditionally. Hamas has denied abducting the soldier. He also said reviving the collapsed cease-fire is "going to be challenging" without confidence Hamas will comply. And, Obama said "it's hard to reconcile Israel's legitimate need to defend itself with the legitimate concerns" for civilian casualties in Gaza. But he noted the "incredibly irresponsible action by Hamas" in storing rockets in crowded neighborhoods.
END_OF_DOCUMENT_TOKEN_TO_BE_REPLACED

BREAKING … TEMPORARY MIDEAST CEASE-FIRE: U.N. Secretary-General Ban Ki-moon and Secretary of State John Kerry say the U.N. hasassurances that all parties have agreed to an unconditional humanitarian cease-fire in Gaza. It will commence at 8 a.m. local time on Friday and will last for 72 hours unless extended.
END_OF_DOCUMENT_TOKEN_TO_BE_REPLACED