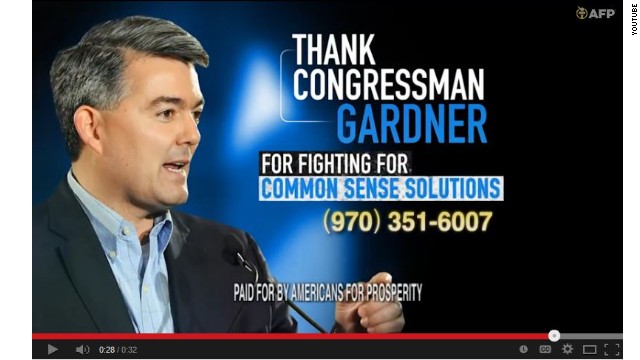 The conservative non-profit political advocacy group backed by the deep pockets of billionaire industrialists David and Charles Koch announced Wednesday that it's going to run new television commercials in a key Senate race in Colorado and an important House battle in New Hampshire.
END_OF_DOCUMENT_TOKEN_TO_BE_REPLACED

Florida Sen. Marco Rubio, a likely contender for the 2016 presidential nomination, is urging his supporters to contribute to Gardner's bid to unseat Sen. Mark Udall.
END_OF_DOCUMENT_TOKEN_TO_BE_REPLACED END_OF_DOCUMENT_TOKEN_TO_BE_REPLACED

The 39-year-old Gardner joins a crowded field of Republicans seeking the GOP nomination, and will be considered a serious contender for the nod. Among those in the race are Weld County District Attorney Ken Buck, state Sen. Owen Hill, and state Rep. Amy Stephens.

END_OF_DOCUMENT_TOKEN_TO_BE_REPLACED

A case of mistaken identity in Colorado

Markey's campaign is firing back at a recent ad released by Gardner's campaign accusing Markey of "voting for the most fiscally irresponsible budget in history." One problem- wrong Markey. Betsy Markey actually voted against the Obama administration's budget. The confusion stems from the fact that the other Markey in Congress, Rep. Ed Markey a Democrat from Massachusetts voted yes.
END_OF_DOCUMENT_TOKEN_TO_BE_REPLACED