(CNN) – Though they worked for presidents who would disagree on many issues, the five men who shared a stage Wednesday nightly mostly agreed on at least one thing: they didn't want their job.

Each of them had once served as White House chief of staff, but in many cases, only after initially balking at the job offer or outright turning it down.

“People came up to me and said, ‘Gosh, you've been serving for five years,’” said Josh Bolten, who had held a variety of positions including budget director in the administration of George W. Bush before ascending to chief of staff.   “You must be completely worn out.  How can you take the chief of staff job?

END_OF_DOCUMENT_TOKEN_TO_BE_REPLACED 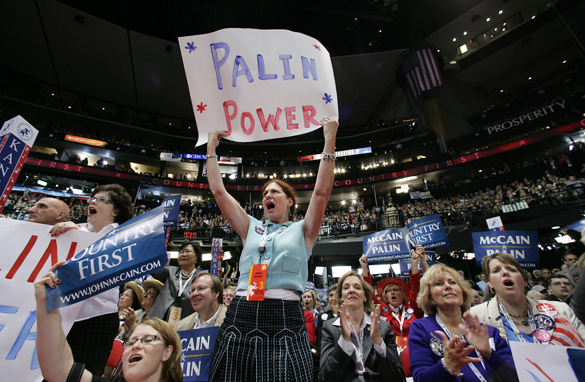 Palin wowed the RNC Wednesday, but how will she play in suburbia? (Photo credit: E.M. Pio Roda / CNN )

It is clear from tonight's national debut that Sarah Palin may connect extremely well in rural, small-town America. And no doubt, Republicans will be sending her there in key states like Ohio, Pennsylvania, Michigan and the like. Her pit bull style, combined with her humor and presence along with her roots, will likely draw people to her. Lots of people there will look forward to hearing her in person.

The question for me is whether she will also appeal in suburban America. I am not at all certain that she will: her combative, anti-elitist style - along with her staunch conservatism on issues like abortion - may just leave a lot of voters cool if not cold.

The answer to that question could have a big bearing on the election. What do you think?

[cnn-photo-caption image= http://i2.cdn.turner.com/cnn/2008/images/09/03/art.gergen2.gi.jpg caption="Palin addressed the RNC Wednesday."]Republicans got everything they could possibly want from Sarah Palin tonight: she was a large, confident personality - one Democratic friend ruefully wrote that she reminded him of Ann Richards - and she delivered an extremely well crafted speech. Before the speech, Republican strategists told Dana Bash of CNN that they hoped that she would show viewers "a common touch with executive presence", and she definitely succeeded at that.

Three things in particular stood out:

1. She joked that the difference between a hockey mom and a pit bull is ...lipstick. Clearly, in the next few weeks, she will play the role of a pit bull with lipstick. My sense is that she will very likely connect with blue collar America but may be much less successful in suburban America.

2. Her personal story is also one that will relate well to people. She has a quality of seeming like the girl next door.

3. She showed a lot of confidence in addressing energy toward the end of the speech, which gave her more substantive depth.

Now let us be clear: there will be tons of Democrats and others who will disagree with her and will take sharp exception with her views. Her jabs at Barack Obama and the Democrats were surprisingly personal at times. And she will face tough questioning ahead from the press. After all, there are still some serious questions about what kind of president she might be. We are going to have a rough and tumble race down the home stretch.

Gergen: A strong opening night for the GOP

[cnn-photo-caption image= http://i2.cdn.turner.com/cnn/2008/images/09/02/art.gergen.gi.jpg caption="Gergen says Republicans are likely happy with the first night of the RNC."]From a Republican perspective, this was a strong first night. Speaker after speaker gave testimony to the courage, patriotism and independence of John McCain - messages that will resonate with a good many voters across the land. In addition, they drew some stark contrasts between Barack Obama and McCain, the kind of contrasts that are legitimate at a political convention - even when you disagree with them.

But there were also some dispiriting aspects to the evening. It revealed once again just how deeply divided this country is and how much free-floating anger and hatred there is toward those seen on the other side. There is a whole lot of demonization going on that suggests just how difficult it will be for the next president to unite the country. Repubicans probably think that Democrats were worse than they were - and vice versa; personally, I cringed a little less at some of the Democratic rhetoric (though there was some that went over the line).

I also found it interesting how much the Repubicans are eager to fire up their supporters by reigniting the "culture wars". Abortion has very much injected into the campaign and once again the Republicans are finding it easy to beat up on the press - the "big shots" in the media, as they call them. Will it work? You tell me.

Will look forward to your thoughts.

Gergen: 3 challenges for GOP this week

[cnn-photo-caption image= http://i2.cdn.turner.com/cnn/2008/images/09/02/art.rnc.convention.gi.jpg caption="Three challenges for the GOP this week."]

As Republicans gather tonight for their convention, they face three looming challenges, in my judgment. Would welcome your thoughts:

(1) Regain the momentum in this presidential campaign: Two weeks ago, Republicans had successfully set up this election as a referendum on Barack Obama and his readiness to be president. And John McCain was surging upward; he had the "Big Mo," as George H.W. Bush used to say. But in the wake of a successful Democratic convention and controversies swirling around McCain's selection of Sarah Palin, the conversation has shifted dramaticallly. Now, as this convention starts, a growing number of voters are asking: is the McCain-Palin ticket up to this? In short, it is becoming a referendum now about the GOP ticket, not the Democratic ticket. And as those questions arise, the Democrats are rising: recent polls show them, on average, with about a 6 point lead - up from a virtual tie two weeks ago. So the Republicans have to reverse that tide here.

END_OF_DOCUMENT_TOKEN_TO_BE_REPLACED

Gergen: Talk about a bold gamble!

Among conservatives, one hears nothing but praise for Governor Sarah Palin - she is strongly pro-life, a long-time member of the NRA, a fiscal hawk, and an interesting combination of charm and toughness. She helps to bring the party back to its conservative roots. With the commitments that McCain made at Saddleback that he would run a pro-life administration, social conservatives - especially evangelicals - can now rally to the McCain-Palin ticket with genuine enthusiasm. McCain seemingly is helping to close the enthusiasm gap on his side.

Yet among Democrats, there is lots of positive acclaim as well. From their perspective, the one argument that McCain has used so effectively against them is that we live in a highly dangerous world - he repeatedly calls terrorism "the transcendent issue of our times" - and Barack Obama has so little national security experience that he represents too much of a risk. Now, say the Dems, here we have a 72-year-old candidate - the oldest to ever seek the office for the first time - and he has asked someone to be a heartbeat away from the presidency who has no national security experience at all - none, nada. Democrats think McCain has completely undercut his strongest argument. They are also relieved that he didn't choose Mitt Romney, who brings a lot of economic understanding and would have been helpful in a big battleground state like Michigan.

So, smiles on both sides. What is uncertain is how uncommitted voters will respond - especially women who might have voted for Hillary Clinton. Clearly, the GOP is betting that Sarah Palin can bring them back. Are they right? Meanwhile, Democrats have told me that a lot of Clinton women will be shooed away by Palin's conservatism - and some will even be insulted. Are they right?

Would love your thoughts.

Read other reaction from Paul Begala and Ed Rollins 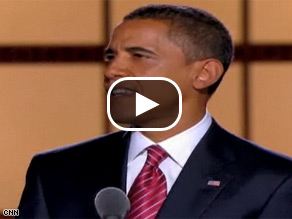 [cnn-photo-caption image= http://i2.cdn.turner.com/cnn/2008/images/08/28/art.ap.obama.dnc.jpg caption="Sen. Barack Obama waves to a sea of supporters Thursday."]
An advance copy of the Obama speech has just been distributed. Because of the embargo, I won't go into content for the moment - but know that it is long and is much meatier than most acceptance addresses. Word count estimate: about 4500 words. Will look forward to hearing listener comments as we go.

[cnn-photo-caption image= http://i2.cdn.turner.com/cnn/2008/images/08/28/art.gore.gi.jpg caption="Gore addressed the Democratic National Convention Thursday."]Before it gets lost in the excitement at Mile High Stadium, it is worth going back and reading Al Gore's speech tonight. While his delivery was way too rushed, the substance of his speech was something that the country needs to think and talk about a lot more: a possible catastrophe building up around us.

Gore has been trying to tell the U.S. and the world for some time now about the dangers of global warming, and to his credit, he has been honored with both an Academy Award and a Nobel Prize for his efforts. But neither of the candidates - nor have the parties - spent enough time talking about what is ahead and what we must do. Every expert I know thinks it will require sacrifice on our part - higher prices for using fossil fuels. When will the candidates level with us on what is required?

Some of you, I am sure, disagree with Al Gore and perhaps you don't even like him, but I must say that from my perspective, we need to pay attention to what he is saying.