Branstad at the time was engaged in a GOP primary fight against conservative activist Bob Vander Plaats, a race he won on June 8 by 10 points.

Citing Branstad's record on taxes when he last served as Iowa governor in the eighties and nineties, one mailer from the group blared: "Liberal Terry Branstad would make Bill Clinton, Barack Obama and Nancy Pelosi proud."

One mail piece portrayed Branstad in a lefty version of Mount Rushmore along with Obama, Clinton and Pelosi. Another claimed that Branstad and Obama both favor universal health care and "government mandates."

END_OF_DOCUMENT_TOKEN_TO_BE_REPLACED 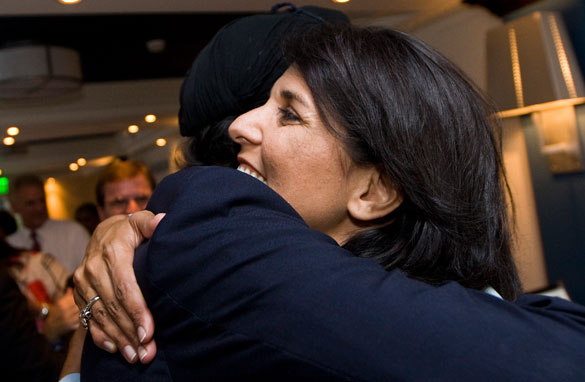 The state lawmaker’s victory over Rep. Gresham Barrett in the GOP runoff “is a testament to her hard work, perseverance and determination,” RGA Executive Director Nick Ayers said in a statement. “Her success ushers in a new era of South Carolina politics, and represents a growing new generation of Republican leaders from across the country. We congratulate her on besting an experienced field of challengers, first capturing the most votes in the primary and then winning the short runoff.”

“We look forward to working with Nikki Haley and her campaign to ensure that she earns a tremendous and well-deserved victory in November,” Ayers added.

“National Republicans desperate for a new rising star are prematurely attaching their hopes to Nikki Haley, who has moved so far outside the mainstream that she’s damaged her general election hopes,” Daschle said in a statement.

CNN projects that Haley has beaten Barrett in the GOP runoff. According to vote totals provided by the Associated Press, with 65 percent of precincts reporting, Haley had 158,539 votes or 64.4 percent of the votes reported compared to Barrett's 87,630 votes or 35.6 percent.

(CNN) - The Republican Governors Association raised $9 million in the first quarter of 2010 and has $31 million cash on hand, an RGA official told CNN Thursday morning. The RGA's fundraising totals are expected to be officially released later in the day.

The RGA's counterpart, the Democratic Governors Association, says they raised a record $8 million in the first three months of the year. The DGA also reported Wednesday that they have $22 million in the bank.

"Our donors are giving because this election cycle will shape our political landscape for a generation to come. Even in a tough fundraising climate, our donors know this is an historic election, and they've stepped up to make sure we have the resources to compete," said Delaware Gov. Jack Markell, who is chairman of the DGA.

END_OF_DOCUMENT_TOKEN_TO_BE_REPLACED

(CNN) - The Democratic and Republican Governor's Associations both said Monday that they had broken their own one-year fundraising records, though the GOP is headed into the New Year with the clear financial advantage.

The DGA raised just over $23.1 million in 2009, the organization announced, and currently holds $17.5 million cash-on-hand. The group says its cash-on-hand figure is nearly 12 times as much as it had during the same period in 2010.

Republicans, meanwhile, raised $30 million in 2009, and begin 2010 with $25 million cash-on-hand. That record-breaking figure comes on the heels of gubernatorial victories for the GOP in Virginia and New Jersey.

The RGA is in a significantly healthier position than it was at this point in 2006, when the organization only had $4 million cash on hand.

Markell takes the reins of the Democratic Governors Association (DGA) from Montana Gov. Brian Schweitzer. Markell, who was elected in 2008, heads into a critical midterm election where control of redistricting is on the line.

"The American people haven't forgotten who drove the country into the ditch," Schweitzer said at a news briefing. "If their story is we're going to go back to the good old days of Bush and Cheney, they're going to lose more elections in this cycle than any in history."

[cnn-photo-caption image= http://i2.cdn.turner.com/cnn/2009/images/11/19/barbour1.jpg caption="Mississippi Gov. Haley Barbour is the chairman of the Republican Governors Association."]Washington (CNN) – In the early days of his campaign for governor in Virginia, Republican Bob McDonnell hired veteran GOP pollster Glen Bolger to take the pulse of the state's notoriously independent-minded voters.

Fifty-five percent wanted a governor who planned to stand up the president, Bolger discovered, while just 35 percent desired someone who would help the White House. It wasn't what he'd expected to find.

"I was kind surprised by that result, because I thought people would say that's not really a factor in the governor's race," Bolger said, noting that McDonnell won the race by a similar margin. "But people saw it as almost like Democrats are oversteering too much in one direction, and they wanted correction."

After dismal election cycles in 2006 and 2008, Republicans are hoping that signs of discomfort with President Obama's agenda will translate into big gains in governor's mansions around the country next November. They point to off-year wins this month in Virginia and New Jersey as early proof that a backlash against Democratic overreach in Washington is underway.

RGA outraises DGA in first half of the year

WASHINGTON (CNN) - The Republican Governors Association Tuesday announced it raised more than $12.2 million dollars for the first six months of the year.

The RGA's announcement came just hours after the Democratic Governors Association announced that they raised a record-breaking $11.6 million in the first six months of the year.

The RGA also reported having a record $20.4 million cash on hand.

END_OF_DOCUMENT_TOKEN_TO_BE_REPLACED

[cnn-photo-caption image= http://i2.cdn.turner.com/cnn/2008/images/12/03/art.schweitzer.gi.jpg caption="Montana Gov. Brian Schweitzer, the DGA's chairman, upped the ante for the next round of campaigns."]WASHINGTON (CNN) - The Democratic Governors Association raised $5.3 million in the first three months of 2009, the group announced Wednesday - the largest amount of money the committee has ever collected in the first quarter of an off-year cycle.

The DGA raised $23 million in 2008. But Montana Gov. Brian Schweitzer, the DGA's chairman, upped the ante for the next round of campaigns, calling the upcoming gubernatorial races in 2009 and 2010 "once-in-a-generation elections."

While 36 governorships are up for grabs in the 2010 midterms, two governorships are at stake this November: in Virginia (an open seat) and in New Jersey (where incumbent governor Jon Corzine will have the ability to spend millions from his own pockets to defeat his Republican challenger).

That means the DGA's cash could be especially useful for the eventual Democratic nominee in Virginia, who will emerge on June 9 after what is shaping up to be a long and costly three-way primary battle. The winner will face the Republican candidate, Bob McDonnell, who has no primary challenger and has so far avoided spending a significant chuck of his war chest.

(Updated after the jump with Republican response)

END_OF_DOCUMENT_TOKEN_TO_BE_REPLACED

Schweitzer, a bolo tie-wearing moderate who handily won a second term as governor in November, was elected at the DGA's annual winter meeting, with Maryland Gov. Martin O'Malley winning the post of vice-chair.

Both men have taken active roles in the DGA, and each said they look forward to working with President-elect Obama as a partner.

The Montana governor is perhaps best known nationally for delivering an electrifying speech to the Democratic National Convention in August, stealing the show on a night when former Virginia Gov. Mark Warner was supposed to be the headliner, but delivered a relatively lackluster keynote address.