Rendell weighs in on Obama effect in PA

[cnn-photo-caption image= http://i2.cdn.turner.com/cnn/2010/images/05/18/art.rendellspecter0518.gi.jpg caption="Gov. Rendell, right, huddled with Sen. Specter, left, and Specter's wife on Tuesday in Philadelphia."]
(CNN) - Some political observers have wondered why the White House opted not to send President Obama or Vice President Biden to Pennsylvania to campaign with Sen. Arlen Specter in the final weeks before Tuesday's Democratic Senate primary.

Pennsylvania Gov. Ed Rendell, a Democrat, offered one theory during an appearance on CNN's "Campbell Brown."

Asked about Obama's and Biden's notable absence from the Pennsylvania campaign trail in recent weeks, Rendell said it might be "because their last minute appearances in New Jersey and Virginia and Massachusetts didn't serve too much good."
END_OF_DOCUMENT_TOKEN_TO_BE_REPLACED

Republicans have advantage in Pennsylvania

[cnn-photo-caption image= http://i2.cdn.turner.com/cnn/2010/images/04/08/art.rendell.0408.gi.jpg caption ="Pennsylvania Gov. Ed Rendell is term limited and prevented from running for re-election this year."](CNN) - Republicans have the advantage in this year's battle for Pennsylvania governor and for one of the state's U.S. Senate seats, according to a new poll.

A Quinnipiac University survey of Pennsylvania voters released Thursday indicates that the leading GOP candidate, Attorney General Tom Corbett, remains ahead of each of the three top Democratic contenders by double digits in hypothetical general election matchups. The incumbent governor, Democrat Ed Rendell, is term limited and prevented from running for re-election this year.

According to the poll, in the Senate campaign Republican challenger Pat Toomey leads Sen. Arlen Specter 46 percent to 41 percent, with 12 percent undecided. The advantage for Toomey is just inside the poll's sampling error. Toomey trailed Specter in a Quinnipiac poll released a month ago. The two men have exchanged small leads since last autumn.

Toomey is a former congressman and former head of the Club for Growth, a limited-government and anti-tax organization. Specter, a five-term senator, switched parties from Republican to Democrat last spring. At the time of the party flip, he cited the difficulty in winning the Republican primary against Toomey as a factor.

"A Toomey-Specter race could continue swinging back and forth until November because most voters won't begin to focus on it until after Labor Day," says Peter A. Brown, assistant director of the Quinnipiac University Polling Institute.

END_OF_DOCUMENT_TOKEN_TO_BE_REPLACED

(CNN) – Two of the nation’s chief executives – Govs. Mitch Daniels of Indiana and Ed Rendell of Pennsylvania – assessed the current state of the economy on CNN’s State of the Union.

While economic signs are pointing to a recovery, both governors said the conditions in their own state aren’t so rosy.

“I'll say that when I talk to businesspeople, they're a lot more guarded than what some of the economists are saying just looking at the macro data,” Daniels said. “Here in Indiana, we're well below the national average. We're the lowest unemployment in the Midwest.”

While conditions may be slightly better in Pennsylvania, Rendell said business leaders are taking a cautious approach when it comes the state’s recovery.

“Businesses are still cautious, because they can't get lines of credits, they can't get sufficient loan guarantees. They simply can't get capital. And that's true for developers. It's true for all sorts of businesses,” Rendell said. “But we're seeing some very hopeful signs, and we're cautiously optimistic.”

Thirty-nine percent of those questioned in a Quinnipiac University survey released Tuesday approve of the job Rendell's doing as Pennsylvania governor. That's a drop of 15 points from May, and marks Rendell's lowest level ever in Quinnipiac polling.

The survey indicates that nine out of ten Pennsylvania voters say the inability of Rendell and state lawmakers to come up with a budget agreement by the June 30th deadline is a serious problem, and Rendell gets much of the blame.
END_OF_DOCUMENT_TOKEN_TO_BE_REPLACED

Obama shows off his cheesesteak knowledge

And unlike former presidential candidate John Kerry, who once committed the cardinal sin of ordering the sandwich with Swiss cheese at Pat’s King of Steaks in Philadelphia, the president has apparently learned a truism of campaigning: a real cheesesteak is served not with Swiss, provolone or cheddar … but with whiz.

During a Monday press conference, Obama went out of his way to demonstrate this knowledge after meeting with small business owners from around the country, including Marco Lentini, who owns an organic restaurant in Philadelphia.

“I asked him, what was the equivalent at his shop of a cheese steak,” Obama said of the meeting. “And he described to me, what was it? A chicken ... ?”

Lentini interrupted, drawing laughter from the president and the press corps.

During the campaign, Pennsylvania Gov. Ed Rendell said the future president could use a daily cheesesteak ration. "Perhaps the only thing I don't like about him is, he's too thin," he said.

Obama was quick to point out the perils of too much Pat’s. "A cheesesteak, once a day," he mused, "and I will have the pleasure of looking like Ed Rendell."

While having a private conversation at the National Governor’s Association meeting in Philadelphia on Tuesday, an open microphone picked up Rendell labeling Gov. Napolitano, D-Arizona, as “perfect” for the cabinet position because she has no family, and the position requires a person with “no life.”

On Tuesday CNN’s Campbell Brown railed against the governor, commenting that it was a sexist statement that would have never been uttered had Napolitano been a man.

But the outspoken Pennsylvania Democrat shrugged off the criticism in an interview with CNN’s Wolf Blitzer on Sunday.

“What I said about Janet is true. I think she's the gold standard for governors. She works hard, she's dedicated, she's focused,” he said on Late Edition.

“Campbell Brown, who I love, as a person and respect as a newsperson, couldn't have been more wrong. She said that it was somehow sexist or a comment on single women. Let me tell you—If Janet Napolitano was Jim Napolitano and had no family, I would have said the exact same thing,” Rendell confidently stated.

Though Rendell claimed that he sent the Arizona governor a hand-written note apologizing for any discomfort he caused her, he strongly defended his controversial comment.

“Wolf, we've gotten really far off field in the way we cover news if that statement which is absolutely 100 percent true is construed as something. I would have said it about man or woman in similar position. It was meant to comment on how tough the job is and how great a choice Janet is,” Rendell told Blitzer.

“Senator Obama has done everything he could to bring us to this point. For two years he’s campaigned across the length and breadth of this country and he’s done a great job,” Governor Ed Rendell told a mostly African-American crowd in north Philadelphia. “In the primary, only 53 percent of the registered voters in Philadelphia turned out. Twenty-four days from today, 53 percent will not cut it. It will not cut it if we want to make sure that Barack Obama is the 44th President of the United States. We need to turn out at least 75 percent.”

The homage to the Philadelphia Phillies and requisite cheese steak references aside, Obama stuck to the economic populist stump speech he’s delivered in various battleground states since the financial crisis began.

“We need policies that grow our economy from the bottom-up, so that every American, everywhere has the chance to get ahead,” Obama told residents in Germantown, a Northwest Philadelphia neighborhood. “These are the Americans I’m standing for. These are the folks I’m fighting for. The cops, the teachers, the guys who pick up the garbage, the folks who are mopping the floors at night, the people who are starting a small business the barber shop owner, the hardware store owner, that’s the kind of leadership I’m offering. That’s what I mean when I’m talking about change.

Obama drew thousands at four stops in distinct sections of the city. Crowds jammed his motorcade route screaming, waving and occasionally running in between the cars, creating havoc.

END_OF_DOCUMENT_TOKEN_TO_BE_REPLACED

Rendell on McCain attacks: 'I think they're just stupid'

When asked if he thought there has been any racial undercurrent to the McCain-Palin ticket bringing up issues like Obama’s relationship with 1960s radical William Ayers, Rendell shook his head.

“Not particularly. I think they’re just stupid, they’re dumb, dumb,” Rendell said of the attacks. “They’re all dumb when people are facing the challenges in their own lives that they’re facing no one wants to hear that stuff it’s just dumb.

"You know tell us what you want to do. If he’s got a plan for the mortgage bailout explain it to the American people that might get people’s interest … but don’t tell us about you know something that happened when Barack Obama was just 8 years of age, it’s just dumb.”

“There’s no bargaining. You don't bargain with the presidential nominee,” Rendell told NY1. “Even if you're Hillary Clinton and you have 18 million votes, you don't bargain.”

Rendell – the governor of a major November battleground state who has often been mentioned as a possible vice presidential pick – said Obama would need to be an “enormously big person” to invite Clinton to join him on the ticket.

But in a reversal from earlier statements – and remarks at odds with recent comments from many major Clinton supporters – Rendell seemed to signal that a joint ticket featuring the party’s two candidates was not ideal.

He said that if Clinton were Obama’s running mate, her husband - former President Bill Clinton - could be a wild card during the general election.
END_OF_DOCUMENT_TOKEN_TO_BE_REPLACED 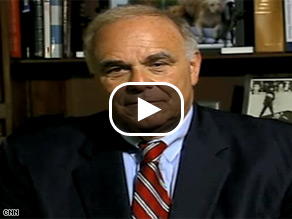