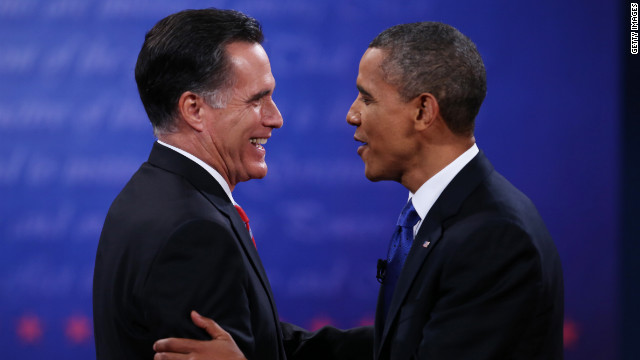 Obama, debating former Massachusetts Gov. Mitt Romney at Lynn University in Boca Raton, Florida, made the comment while touting his decision to involve the United States in a NATO no-fly-zone operation that helped rebels overthrow Gadhafi over seven months in 2011. 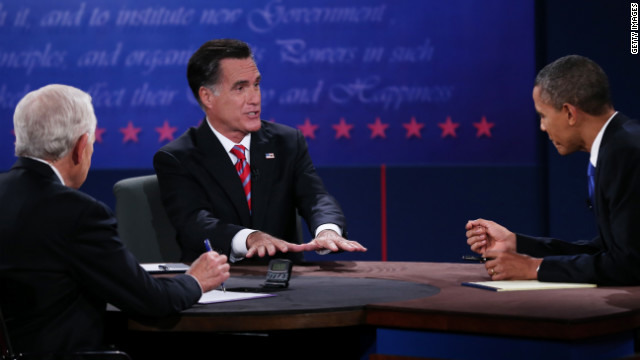 (CNN) - In Monday's foreign policy debate, President Barack Obama said Gov. Mitt Romney had criticized his administration for being too tough against China, and bringing a protectionist case at the World Trade Organization.

The statement: Obama cited a case in which the Chinese "were flooding us" with cheap tires. "And we put a stop to it and as a consequence saved jobs throughout America. I have to say that Gov. Romney criticized me for being too tough in that tire case; said this wouldn't be good for American workers and that it would be protectionist," Obama said.

A day after Libya attack, Obama described it as 'acts of terror'

(CNN) - President Barack Obama said he identified the September 11 assault on the U.S. Consulate in Libya as a terrorist attack within a day; former Massachusetts Gov. Mitt Romney said it took two weeks.

The claim: "The day after the attack, governor, I stood in the Rose Garden and I told the American people in the world that we are going to find out exactly what happened," Obama said. "That this was an act of terror and I also said that we're going to hunt down those who committed this crime."

(CNN) - There was no shortage of wind or electricity at Thursday night's debate between Vice President Joe Biden and Rep. Paul Ryan, the Republican contender for that office. But federal support for wind power and electric cars was one of the early flashpoints between the two.

Washington (CNN) - When the topic turned to contraception and reproductive rights at CNN's debate in Arizona on Wednesday, Newt Gingrich went on the attack, saying that in 2008 "not once did anybody in the elite media ask why Barack Obama voted in favor of legalizing infanticide."

It's a striking claim, and he's not the only Republican presidential candidate making it. Speaking at the Iowa Faith and Freedom Coalition Forum last March, Rick Santorum said, "any child born prematurely, according to the president, in his own words, can be killed."

[cnn-photo-caption image= http://i2.cdn.turner.com/cnn/2010/images/03/04/art.obamahc.gi.jpg caption="Is the White House's list of Republican ideas in the legislation passed by Congress correct?"] (CNN) - President Obama outlined four GOP ideas that he is willing to incorporate into his final version of a health care bill. In addition to those four proposals, which were brought up by Republicans during last week's health care summit, the White House touted the eight Republican ideas already incorporated in health care legislation passed by Congress as a way to show that the bill contains ideas from both sides. White House communications director Dan Pfeiffer posted GOP-backed proposals on the White House blog. The Fact Check Desk decided to check it out.

Fact Check: Is the White House's list of Republican ideas in the legislation passed by Congress correct? Have they truly been supported by Republicans?