Hot and cold day for Obama and Putin

Los Cabos, Mexico - Call it a case of appearances over substance. During brief remarks after President Obama’s bilateral meeting with Russian President Vladimir Putin on Monday morning, the two leaders’ body language seemed to indicate the meeting had not gone well. They rarely looked at each other, never smiled and ended their meeting with a perfunctory handshake.

Reporters pounced on such a dramatic visual representation of what has recently been a somewhat troubled relationship. Russia has refused to go along with the United States and other nations in calling for Syrian President Bashar al-Assad to step aside, and has blocked two U.N. Security Council Resolutions sanctioning the Syrian government.

Is a billion-dollar summit worth it?

Washington (CNN) - Like Dr. Evil learned in the Austin Powers movies, a billion dollars isn't quite what it used to be.

This weekend's G8 and G-20 summits are expected to top $1 billion in costs. At such a large price tag, it's reasonable to ask if the meetings are worth it. But according to former top White House aides, even with the hefty price the meetings more than pay for themselves in both tangible and intangible ways.

According to David Gergen, who worked for five presidents and has participated in several of these summits, the world has already seen a return on the current $1 billion investment. 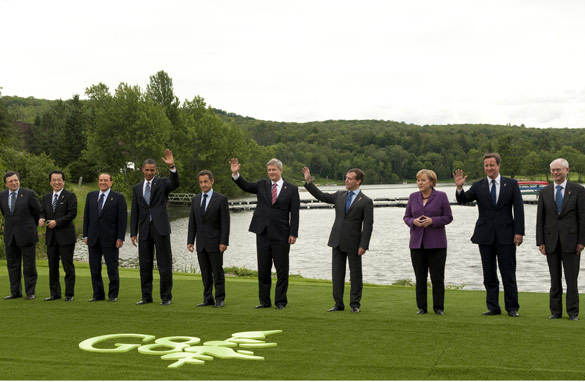 (CNN) - As world leaders prepare to meet in Toronto for the G-20 summit, disagreements are brewing over how the global economy's fragile recovery should best be steered.

The United States has been urging other countries not to pull back on stimulus plans too quickly. Britain, in contrast, has recently joined other European countries in announcing drastic budget cuts as fears grow about mounting public debt.

Leaders have begun arriving for the G-8 summit, which begins Friday, followed by the G-20 summit this weekend.

The last G-20 summit was September in Pittsburgh. Since then sovereign debt issues have clouded the global economic recovery. Dubai's debt worries in November foreshadowed the Greek debt crisis, which spiraled to other southern European nations. Public debt woes saw the value of the euro dip from $1.50 in December to below $1.20 in May, sparking fears the 17-nation bloc united under the currency may collapse.

END_OF_DOCUMENT_TOKEN_TO_BE_REPLACED

"Our highest priority in Toronto must be to safeguard and strengthen the recovery," wrote Obama, in his G-20 letter released by the White House on Friday. "We worked exceptionally hard to restore growth; we cannot let it falter or lose strength now. This means that we should reaffirm our unity of purpose to provide the policy support necessary to keep economic growth strong.

Obama provided a list of suggested policy changes, including the implementation of more stringent capital and liquidity requirements as well as stronger oversight of derivatives markets and "more transparency and disclosure to promote market integrity and reduce market manipulation."

In addition, the president said the G-20 needs a "more effective framework for winding down large global firms."

The president pointed out that both houses of U.S. Congress have passed financial reform legislation. They are currently working on reconciling the bills in a move toward final approval.

[cnn-photo-caption image= http://i2.cdn.turner.com/cnn/2009/images/09/25/art.g20summit.gi.jpg caption="The Pittsburgh summit was the third G-20 summit in less than a year, and leaders agreed to work together more closely toward sustained growth and cracking down on banking regulations."]

WASHINGTON (CNNMoney.com) - Leaders of G-20 nations committed Friday to a timeline to establish and enforce new rules aimed at spurring financial firms around the globe to improve capital cushions and avoid taking risk.

They agreed to keep working to stimulate economies and stabilize financial systems following the worst financial crisis in decades.

"We brought the global economy back from the brink, we laid the groundwork today for longtime prosperity as well," President Obama said at a press conference after the summit concluded. "Still we know there is much further to go."

The Pittsburgh summit was the third G-20 summit in less than a year, and leaders agreed to work together more closely toward sustained growth and cracking down on banking regulations.

END_OF_DOCUMENT_TOKEN_TO_BE_REPLACED

The move comes in the wake of a major push by U.S. President Barack Obama, the officials said. The G-20 will now essentially eclipse the G-8, which will continue to meet on major security issues but carry much less influence.

"It's a reflection of the world economy today and the players that make it up," said one senior official. Nations like China, Brazil and India - which were locked out of the more elite G-8 - will now be part of the larger group.

[cnn-photo-caption image=http://i2.cdn.turner.com/cnn/2009/POLITICS/09/21/obama.world.view/art.obamared.gi.jpg caption="President Obama delivered a speech to the Muslim world this summer in Egypt"]
WASHINGTON (CNN) - President Obama, facing daunting domestic challenges, may have another tough battle on his hands: maintaining the United States' growing popularity throughout the world.

And the spotlight will focus on global issues this week.

On Tuesday, Obama meets with the Israeli and Palestinian leaders separately and then jointly. He will also meet late that day with Chinese President Hu Jintao and speak to the Clinton Global Initiative meeting.

The president meets Wednesday with Japan's new prime minister and addresses the U.N. General Assembly. Later, he will meet with Russian President Dmitry Medvedev - their first face to face meeting since Obama's decision to scale back U.S. missile defense plans in the Czech Republic. Later Friday, Obama will take part in two G-20 meetings in Pittsburgh, Pennsylvania, focused on the global economy.

Coming up with a plan to deal with the worldwide recession, experts have said, will be a key challenge for Obama.

"When it comes to the global economic crisis, publics around the world tend to see the U.S. as having a negative impact on their own economies right now," said Richard Wike, associate director for the Pew Global Attitudes Project.

The summit will be held from September 24-26 in Pittsburgh, Pennsylvania.

[cnn-photo-caption image=http://i2.cdn.turner.com/cnn/2009/WORLD/europe/04/04/nato.summit/art.obama.nato.gi.jpg caption="President Obama and German Chancellor Angela Merkel greet other leaders Saturday at the NATO summit."]
STRASBOURG, France (CNN) - President Obama on Saturday said he is "pleased that our NATO allies pledged their strong and unanimous support" for the new U.S. strategy toward fighting militants in Afghanistan and Pakistan.

Obama spoke at the end of a two-day NATO summit in Strasbourg, France. One of the main topics of discussion was the war against the Taliban and al Qaeda in Afghanistan and Pakistan.

The combat forces from allied and partner nations will provide security leading up to Afghan elections later this year. Of the 3,000, the major contributors will be Britain, with 900, and Germany and Spain, 600 each.

NATO Secretary-General Jaap de Hoop Scheffer said Saturday that "when it comes to Afghanistan, this summit and this alliance has delivered."