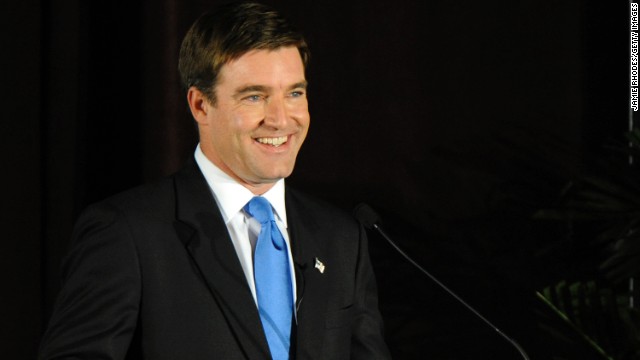 END_OF_DOCUMENT_TOKEN_TO_BE_REPLACED

Washington (CNN) - In the bitterly fought battle for Kentucky's Senate seat, a race that was highlighted by the controversial Aqua Buddha ad, Democrat Jack Conway conceded to Rand Paul "graciously" in Senator-elect Paul's own words to CNN anchor Wolf Blitzer.

But in front of supporters Tuesday night, Conway vowed to fight for campaign finance reform, which he said was one of the reasons that lead to his defeat.
END_OF_DOCUMENT_TOKEN_TO_BE_REPLACED

Clinton will try to be the closer in West Virginia

Charleston, West Virginia (CNN) – President Bill Clinton will return to West Virginia the day before the midterm elections to try and help keep in party hands a Senate seat that's been controlled by Democrats for over half a century.

Clinton will team up at a rally Monday in Beckley, West Virginia with Gov. Joe Manchin, a popular two-term Democrat who is his party's nominee for the state's open Senate seat. This will be Clinton's second campaign stop with Manchin in West Virginia over the past month.
END_OF_DOCUMENT_TOKEN_TO_BE_REPLACED

(CNN) - The hotly contested race for Kentucky's open Senate seat is nearing an end with Republican nominee Rand Paul holding a seven-point lead, according to a new poll.

(CNN) - An employee with the liberal group Moveon.org was stomped on by a man wearing a "Rand Paul for Senate" T-shirt outside a televised debate in Lexington, Kentucky, Monday night, police said.

The incident took place before the debate between Republican Paul and Democrat Jack Conway.
FULL STORY

(CNN) - The candidates in Kentucky's final Senate debate wasted no time in getting down to business, parsing through policy differences and touting their respective credentials.

It was a contest that almost didn't happen; Republican candidate Rand Paul threatened to pull out after an ad by his opponent, Democratic candidate Jack Conway, attacked his religious views. But with eight days left until election day, Paul decided to participate.

Monday's debate differed from earlier ones that were laced with character attacks. Instead, it involved a series of in-depth discussions over how each candidate approached major issues, including the economy, health care reform and the deficit.

"While I do not respect Mr. Conway's inappropriate attacks, I do respect the voters of this state and therefore will participate in Monday's final debate," Paul said.
END_OF_DOCUMENT_TOKEN_TO_BE_REPLACED

Clinton the closer in Kentucky?

Louisville, Kentucky (CNN) - Former President Bill Clinton is returning to Kentucky the day before the midterm elections to try and help pry an open Senate seat out of Republican party hands.

The former president will team up on November 1 with Kentucky Attorney General Jack Conway, the Democrats' Senate nominee, a Conway campaign official confirms to CNN. But the campaign doesn't have details yet on where the event will be held. Clinton headlined a Conway rally in Lexington on October 11.
END_OF_DOCUMENT_TOKEN_TO_BE_REPLACED

Rand Paul to CNN: "I've never said or written anything un-Christian in my life."

"In my entire live, I've written and said a lot of things. I've never said or written anything un-Christian in my life," Paul said.
END_OF_DOCUMENT_TOKEN_TO_BE_REPLACED

"The ad will run its course and we'll be talking about a lot of different issues," Conway confirmed to CNN.

In an interview with CNN at a campaign stop in Hopkinsville, Kentucky, Conway said he personally approved the ad targeting his Republican opponent Rand Paul. "I think he has to answer the questions," Conway said.