END_OF_DOCUMENT_TOKEN_TO_BE_REPLACED

Clapper noted that he has worked in the intelligence field for 50 years, and "never seen anything like this."

(CNN) - A day before the House is expected to vote on restrictions to the National Security Agency's controversial phone surveillance program, the director of national intelligence told CNN Tuesday he would be "very concerned" if the measure were to pass.

James Clapper commented briefly as he left a classified hearing of the Senate Intelligence Committee, which also is exploring changes to the program in the wake of leaks by former NSA contractor Edward Snowden.

(CNN) - James Clapper, the director of national intelligence, has apologized to a Senate committee for giving members a "clearly erroneous" answer about U.S. surveillance programs this year.

In a June 21 letter to Intelligence Committee Chairman Dianne Feinstein that is just coming to light now, Clapper said he wanted to "set the record straight."

The Kentucky Republican suggested intelligence chief James Clapper had lost all credibility in the wake of intelligence leaks showing information on phone calls and internet usage being collected by the National Security Agency,
END_OF_DOCUMENT_TOKEN_TO_BE_REPLACED 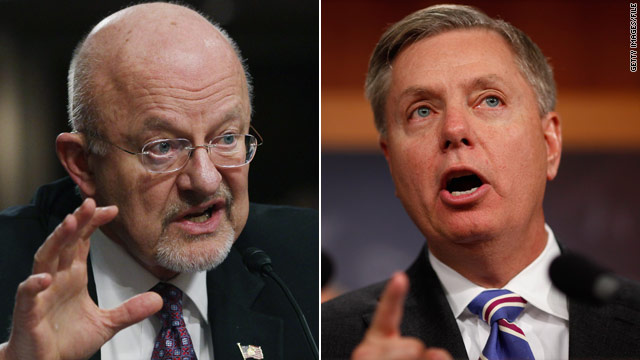 Pawlenty, a possible Republican presidential contender, was reacting to Director James Clapper's testimony before a House panel Thursday. Clapper described the Islamic group the Muslim Brotherhood as "a very heterogeneous group, largely secular, which has eschewed violence and decried Al Qaeda as a perversion of Islam."
END_OF_DOCUMENT_TOKEN_TO_BE_REPLACED

In an interview that aired Tuesday but was taped on Monday, ABC's Diane Sawyer chatted with Clapper, Homeland Security chief Janet Napolitano, and John Brennan, the president's assistant for homeland security and counter-terrorism.
END_OF_DOCUMENT_TOKEN_TO_BE_REPLACED

Washington (CNN) - After just two weeks on the job, the nation's new intelligence chief has taken his first step toward further integrating the intelligence community.

Director of National Intelligence James Clapper announced Friday that he is creating the position of deputy director for intelligence integration. In a written statement, Clapper said the new position is designed "to elevate information sharing and collaboration" between those who collect intelligence and those who analyze it.