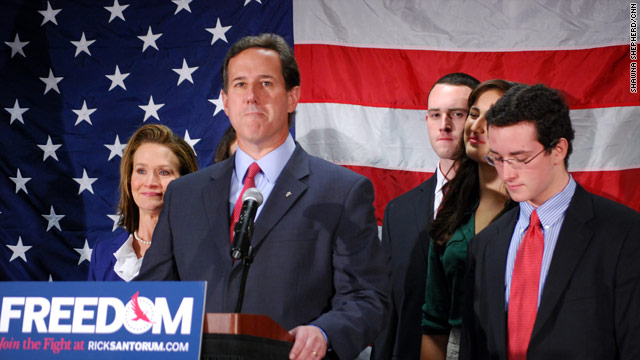 Lancaster, Pennsylvania (CNN) – Former Republican presidential candidate Rick Santorum reflected Tuesday evening on family and why he believes he was labeled the “extremist” candidate in the GOP race.

The revelations were made at an event with James Dobson, founder of the conservative group Focus on the Family, who was also an early Santorum supporter.

END_OF_DOCUMENT_TOKEN_TO_BE_REPLACED

(CNN) – James Dobson, the founder of the conservative group Focus on the Family and a Rick Santorum supporter, is hitting radio airwaves in Michigan promoting the former Pennsylvania senator ahead of the state's February 28 primary.

In the radio spot, which was produced and paid for by Santorum's campaign, Dobson says, "Like you I take my vote for president very seriously. Especially in this most vital election. And my choice could not be more clear. I'm voting for Rick Santorum. I worked with this man for many years when he was a senator from Pennsylvania. And I found him to be a remarkable leader."

CNN LIVE: Tune in Wednesday at 8 p.m. ET for the last presidential debate before Super Tuesday, the CNN/Arizona Republican Party Debate hosted by John King. Follow it on Twitter at #CNNDebate and on Facebook at CNN Politics. For real-time coverage of the Arizona and Michigan primaries, go to CNNPolitics.com or to the CNN apps or CNN mobile web site.
END_OF_DOCUMENT_TOKEN_TO_BE_REPLACED 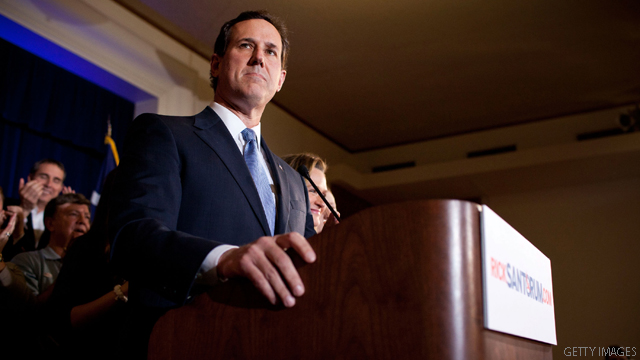 After delivering a pointed version of his stump speech before a crowd of more than 1,200 people at Mr. Biggs Family Funhouse here, Santorum introduced Dobson, founder of the conservative group Focus on the Family.
END_OF_DOCUMENT_TOKEN_TO_BE_REPLACED

About face by Dobson in Kentucky endorsement

(CNN) – The founder of Focus on the Family, the influential socially conservative organization, is switching his endorsement in the divisive Republican Senate primary battle in Kentucky.

"Have you ever made an embarrassing mistake? I did just that last week. I was given misleading information about the candidacy of Dr. Rand Paul, who is running in the Republican Primary for the U.S. Senate. Senior members of the GOP told me Dr. Paul is pro-choice and that he opposes many conservative perspectives, so I endorsed his opponent," Dobson said in a statement released Monday by the Paul campaign.

"But now I've received further information from OB/GYN's in Kentucky whom I trust, and from interviewing the candidate himself. I now know that he is avidly pro life. He believes that life begins at conception," added Paul.
END_OF_DOCUMENT_TOKEN_TO_BE_REPLACED

[cnn-photo-caption image= http://i2.cdn.turner.com/cnn/2010/images/04/26/art.jdobson.07c.gi.jpg caption="James Dobson Monday endorsed Kentucky Secretary of State Trey Grayson for Senate."](CNN) - The founder of the socially conservative Focus on the Family organization is weighing in on the divisive Republican Senate primary battle in Kentucky.

"Trey Grayson is the only candidate with the conviction to lead on the issues that matter to Kentucky families," Dobson says in a statement released by the Grayson campaign. "His unwavering commitment to the sanctity of human life and the family resonates with me. I know that he will be a leader on these issues, not just another Senator who checks the box."

The release notes that Dobson, who no longer heads Focus on the Family, is making the endorsement as a private individual.

END_OF_DOCUMENT_TOKEN_TO_BE_REPLACED

"I have long respected former Senator Dan Coats for his integrity and his legislative influence in the Congress," Dobson said in a statement. "I also admire his personal commitment to his Christian faith in public life. Dan has been a consistent leader of pro-family causes and a stalwart defender of unborn children. If my wife Shirley and I were Hoosiers, we would definitely vote for Dan Coats in the May 4th primary."

In addition to the endorsement, Dobson cut a radio ad on Coats' behalf that is set to run starting on Tuesday.

END_OF_DOCUMENT_TOKEN_TO_BE_REPLACED

"Over the years, Gov. Perry has established a record that is consistently pro-life, pro-marriage and pro-religious liberty," Dobson said in a written statement. "No other candidate in this race measures up to the high standards established by Gov. Perry on these critical issues of our day."

“Any notion that I was distorting the Bible in that speech, I think anyone would be hard pressed to make that argument,” Obama told reporters on board his press plane Tuesday night.

Obama's past comments came front and center Tuesday when Dobson criticized the presumptive Democratic nominee’s June 2006 speech on his Focus on the Family radio show.

In the speech, Obama suggested that it would be impractical to govern based solely on the word of the Bible, noting that some passages suggest slavery is permissible and eating shellfish is disgraceful.

"Which passages of scripture should guide our public policy?" Obama asked in the speech. "Should we go with Leviticus, which suggests slavery is OK and that eating shellfish is an abomination? Or we could go with Deuteronomy, which suggests stoning your child if he strays from the faith? Or should we just stick to the Sermon on the Mount - a passage that is so radical that it's doubtful that our own Defense Department would survive its application?"

Obama responded Tuesday saying the speech underscored the notion he is a man of faith and highlighted the importance that people like him who find faith important “try to translate our concerns in a universal language so that we can have open and vigorous debate.”

UPDATE: Responding to the comments, Tom Minnery, senior vice president of Focus Action, said "There is no need to 'make stuff up' as it relates to Sen. Obama's interpretation of Scripture and the role of religion in the public square."

"His statements and record make clear his questionable perception of both. To argue that the Sermon on the Mount invalidates the Defense Department - as if Jesus Himself didn't have anything to say about the existence of good and evil and the need to combat evil - is about as deep as anyone needs to go to understand where the senator is coming from," Minnery also said. "He is editing God's word to fit his liberal worldview, and the more exposure his views on these matters get, the more obvious this will become to American Christians."

Dobson says he'll weigh in at the polls this November

(CNN) - John McCain has effectively captured the Republican nomination, but he’s still struggling to win over a key constituency of one: Focus on the Family founder James Dobson, who once said he would not vote for the Arizona senator “under any circumstances.”

Some disappointed conservatives had threatened to stay home on Election Day – but Dobson’s interview Monday may send a message to millions of evangelicals that they should reconsider that decision and head to the polls.

In an interview last night, the evangelical leader told FOX host Sean Hannity that while he has issues with all the candidates left in the race, particularly the Democrats, he would definitely be casting his ballot this fall.

"Let me just say that I will certainly vote,” said Dobson. “I think we have a God-given responsibility to vote, and there are all of the candidates and the issues down the ballot that we have an obligation to weigh in on and let our voices be heard."

But he stopped short of embracing McCain’s presidential bid, and expressed skepticism about his orthodoxy on key conservative stands, asking Hannity skeptically if the senator had given a commitment on stem cell research.