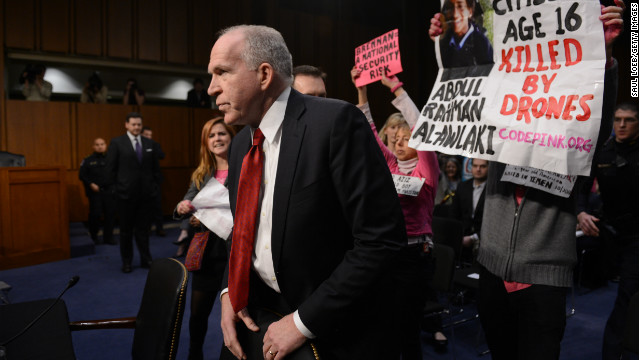 Washington (CNN) - A hearing on President Barack Obama's nominee to head the CIA was temporarily halted on Thursday after protesters repeatedly prevented John Brennan from speaking.

Sen. Dianne Feinstein, the chairman of the Senate Intelligence Committee, ordered the room cleared of spectators after a fifth person began shouting as Brennan began his opening statement.

(CNN) - Saying he has "not forgotten about the Benghazi debacle," Sen. Lindsey Graham called for a delay in the confirmation process of John Brennan, the president's choice for CIA director, as investigations still continue surrounding the September 11, 2012 U.S. consulate attack in Libya.

"I do not believe we should confirm anyone as Director of the CIA until our questions are answered," Graham said in a statement.
END_OF_DOCUMENT_TOKEN_TO_BE_REPLACED

Washington (CNN) - Senators and other political figures reacted on Monday to President Barack Obama's nomination of John Brennan, currently his top counterterrorism and homeland security aide, as the next director of the CIA.

Most of the criticism was saved for former Sen. Chuck Hagel, whom Obama nominated for secretary of defense also on Monday.
END_OF_DOCUMENT_TOKEN_TO_BE_REPLACED

Washington (CNN) - President Barack Obama will nominate John Brennan, his chief counterterrorism adviser, to be the next director of the CIA, a senior administration official said Monday.

Brennan, 57, has served as assistant to the president for counterterrorism and homeland security since 2009.

(CNN) - President Obama will nominate John Brennan to be the next director of the CIA, according to a senior administration official.

The announcement is expected Monday afternoon at the same time the President nominates Chuck Hagel to be the next Secretary of Defense, the official said.

(CNN) - John Brennan, the president's national security adviser for homeland security, said Tuesday that the total number of U.S. troops in Iraq will continue to diminish throughout 2011, but that noted that the withdrawal rate will be "calibrated and adjusted based on conditions on the ground."

The total number of U.S. troops in Iraq has now fallen below 50,000. The U.S. military mission in Iraq will officially switch to an "advise-and-assist" role starting September 1.

Homegrown terrorist threat to be part of National Security Strategy

Washington (CNN) - The Obama administration unveils its National Security Strategy on Thursday and it will be the first time a president explicitly recognizes the threat posed to the country by radicalized individuals at home, the president's chief counterterrorism adviser said.

The security strategy acts as a blueprint for how a White House administration intends to protect Americans. In the past, it has focused mostly on international threats.

But a spate of terror-related plots in the United States recently prompted the Obama administration to include homegrown terrorism in the document, National Security Adviser John Brennan said Wednesday.

Homegrown terrorism represents a new phase of the terrorist threat, he said.

"It looks like he was working on behalf of the Pakistani Taliban," Obama counterterterrorism advsier John Brennan said Sunday on CNN. (Photo Credit: CNN)

John Brennan, the assistant to the president for counterterrorism and homeland security, told CNN's "State of the Union" that the ongoing investigation pointed to Faisal Shahzad having links to Tehrik-e-Taliban, known
as TTP.

"It looks like he was working on behalf of the Pakistani Taliban," Brennan said.

Watch: Brennan weighs in on Shahzad

The group, also known as the TTP, is "closely allied with al Qaeda" and has pledged to carry out attacks on other parts of the world, including the United States, Brennan said.

At issue is the decision to inform AbdulMutallab of his Miranda rights, including his right to remain silent, following his arrest and initial interrogation by the FBI and the administration's decision to try him in a civilian criminal court rather than a military tribunal.

Both moves have sparked debate, especially after the White House revealed last week that AbdulMutallab is again talking to investigators after a period of silence.

On Tuesday, Sen. Bond, the ranking Republican on the Senate Intelligence Committee, called for the resignation of Obama homeland security and counterterrorism adviser John Brennan, saying Brennan "needs to go," and is no longer "credible."

White House Press Secretary Robert Gibbs defended Brennan Thursday saying, "I would suggest whether it's to Senator Bond or others on Capitol Hill that these are decisions best left to people that have an understanding of counterterrorism, experience in counterterrorism and law enforcement rather than the politicians on Capitol Hill."

END_OF_DOCUMENT_TOKEN_TO_BE_REPLACED

Washington (CNN) - Top Republicans in Congress were told the suspect in the failed Christmas airline bombing was in FBI custody hours after his arrest, and none asked if he would be transferred to military custody, President Barack Obama's assistant on homeland security and counter-terrorism said Sunday.

Republican leaders have criticized the Obama administration for charging terrorism suspect Omar Farouk AbdulMutallab in a criminal court and reading him his Miranda rights instead of turning him over to military custody as an enemy combatant.

In a speech last week, Senate Minority Leader Mitch McConnell said: "Many Americans were troubled by the administration's response to the Christmas Day attack. And they're equally outraged by its decision to treat the Christmas Day bomber as a criminal defendant who deserved a lawyer, instead of a terrorist who could provide us with vital information to help stop new attacks."

However, John Brennan, the Obama assistant interviewed Sunday on the NBC program "Meet the Press," said none of the GOP leaders in Congress he called on Christmas night - including McConnell and House Minority Leader John Boehner - raised those issues then.

"I'm tiring of politicians using national security issues such as terrorism as a political football," Brennan said, adding: "They're unknowing of the facts and they're making charges and allegations that are not anchored in
reality."

The GOP leaders knew that "FBI custody means there's a process that you follow as far as Mirandizing and presenting him in front of a magistrate," Brennan said. "None of those individuals raised any concerns with me at that point. They didn't say, "Is he going into military custody? Is he going to be Mirandized?' "
END_OF_DOCUMENT_TOKEN_TO_BE_REPLACED