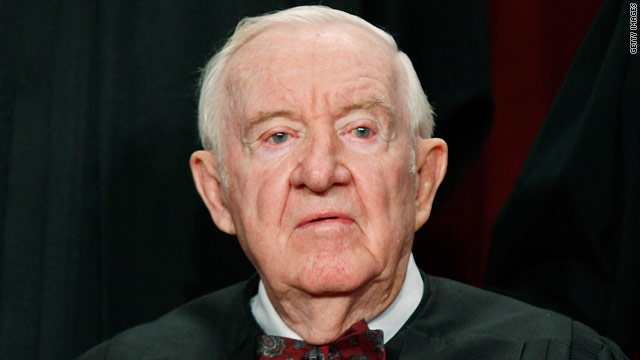 In remarks Thursday evening at his alma mater, Northwestern University, the 91-year-old former justice said the order by President Barack Obama for the covert mission by U.S. Navy SEALs was "to remove an enemy who had been trying every day to attack the United States," according to two people who attended a symposium and dinner that was closed to the media.

Washington (CNN) - The Supreme Court closed its term for the summer Monday with stirring tributes to two members of its larger family.

Justice John Paul Stevens capped his 35-year-career on the high court by emotionally thanking his colleagues. And Justice Ruth Bader Ginsburg was on hand to hear a tribute to her late husband Martin, who died Sunday of cancer.

The nine justices wrapped up their business before a three-month recess by issuing orders and the court's remaining four opinions. Before gaveling the court to a close after a 70-minute session, Chief Justice John Roberts thanked Stevens for his government service.

"Your decision to retire saddens each of us in distinct ways," said Roberts from the bench. "You have enriched us through your inspiring example of public service. The bonds of friendship that we have forged extend beyond our common endeavor." His eight colleagues signed a letter of gratitude, which also included retired justices David Souter and Sandra Day O'Connor.

The 90-year-old Stevens had the last word, telling the packed courtroom, "It has been an honor and a privilege to share custodial responsibility for a great institution with the eight of you and with ten of your predecessors." He appeared emotional in his brief statement, pausing at times. But he smiled broadly at the end.

A Supreme Court without Protestants?

(CNN) - For most of American history, a Supreme Court with no Protestant Christian judges would have been unthinkable. Nearly three quarters of all justices who've ever served on the nation's high court have been Protestant.

And roughly half of all Americans identify themselves as Protestant today.

But since John Paul Stevens announced his retirement last month, legal and religious scholars have begun entertaining the unprecedented prospect of a Supreme Court without a single Protestant justice.
Besides Stevens, who is Protestant, the current Supreme Court counts six Catholics and two Jews.

"For the last 35 years of your remarkable 90, the Nation has benefited from the rigor, courage, and integrity," Obama wrote in the letter, released by the Supreme Court press office.

Obama, who is reportedly reaching out this week to possible candidates to succeed Stevens, wished the high court judge much happiness moving forward.

END_OF_DOCUMENT_TOKEN_TO_BE_REPLACED

"For the last 35 years of your remarkable 90, the Nation has benefited from the rigor, courage, and integrity," Obama wrote in the letter, released by the Supreme Court press office.

Obama, who is reportedly reaching out this week to possible candidates to succeed Stevens, wished the high court judge much happiness moving forward.

END_OF_DOCUMENT_TOKEN_TO_BE_REPLACED

[cnn-photo-caption image= http://i2.cdn.turner.com/cnn/2010/images/04/12/art.gi.stevens.jpg caption ="Stevens' willingness to put aside ego and to rule narrowly on hot-button cases - combined with an unmatched cordiality and kindness - earned him quiet power and respect."]

Washington (CNN) - When the nation's capital was turned upside down last Friday with the announcement that Justice John Paul Stevens was retiring after 40 years on the federal bench, he was miles away from the political circus– literally and figuratively.

The 89-year-old justice was quietly working on his caseload at his Ft. Lauderdale, Florida condo, a second home that serves as his occasional refuge from the high-pressure atmosphere of the U.S. Supreme Court.

It is doubtful his replacement will soon find any sanctuary in what could be a protracted fight over the shaky ideological balance of a mostly conservative high court. The 112th justice, by most measures, will have a tough act to follow, as he or she seeks to navigate the complex dynamics of a divided bench, and gain a measure of the level of influence Stevens enjoyed for the past two decades and more.
END_OF_DOCUMENT_TOKEN_TO_BE_REPLACED

Stevens reactions: 'An inspiration to a generation of Americans' -Biden

Read the statement after the jump:
END_OF_DOCUMENT_TOKEN_TO_BE_REPLACED

Posted by
CNN Supreme Court Producer Bill Mears
Click to watch video
Washington (CNN) - Keeping a secret in this town is often the hardest thing to manage. Supreme Court justices have mastered the art, as John Paul Stevens showed Friday when he announced his retirement after 34 years on the bench.

I was having an informal chat with Stevens' daughter Susan Mullen, a real estate lawyer in the Washington area, on Friday morning. We were talking about family, and her father's judicial legacy. Two minutes after our conversation ended at her law office, the Supreme Court press office called me to say that the 89-year-old Stevens had just announced his intention to step aside. I quickly reached Mullen on the phone and relayed the news, wondering whether she would have her best poker face on during our conversation - knowing but not saying.

"He what?" Mullen said, her voice rising. "Wait a minute, did you just say he just announced it?" The shock in her voice told me she had no idea.
END_OF_DOCUMENT_TOKEN_TO_BE_REPLACED

White House has list of 'about 10' names to replace Stevens

(CNN) - A senior administration official tells CNN that the White House has "about 10" names on the list to replace retiring Justice John Paul Stevens.

Another senior administration official told CNN that some on the list have "already been vetted," referring to those considered when Justice Sonia Sotomayor was chosen.

Stevens reaction: 'A tireless worker and a historic figure' -Sessions

Read the statement after the jump:
END_OF_DOCUMENT_TOKEN_TO_BE_REPLACED