(CNN) - Newark Mayor Cory Booker, a top surrogate for President Barack Obama's campaign, said Friday that a surrogate for Mitt Romney made the wrong call when he argued Colin Powell endorsed Obama because they shared the same race.

"Whatever he meant or not, it was a statement that is unfortunate and just reflects a lack of understanding and sensitivity," Booker said on CNN's "Starting Point with Soledad O'Brien."
END_OF_DOCUMENT_TOKEN_TO_BE_REPLACED

Speaking on CNN’s “Piers Morgan Tonight,” Sununu downplayed the importance of the former secretary of state’s endorsement, pointing to the support Romney’s received from former President George H.W. Bush. He went on to explain that Powell’s endorsement of Obama didn’t rely solely on the political issues at hand.
END_OF_DOCUMENT_TOKEN_TO_BE_REPLACED

(CNN) - Soledad O'Brien and Romney adviser John Sununu spar over when Obama first referred to the "act of terror" in Libya.

(CNN) - John Sununu, a high-profile surrogate for Mitt Romney, on Wednesday stood by the criticism of President Barack Obama in Romney campaign television advertisements that make a claim CNN and others have found to be false.

"But on July 12th, President Obama quietly announced a plan to gut welfare reform by dropping work requirements," said one ad, using language similar to a spot released Wednesday morning. "Under Obama's plan, you wouldn't have to work and wouldn't have to train for a job. They just send you your welfare check."
END_OF_DOCUMENT_TOKEN_TO_BE_REPLACED

Sununu: Obama is a 'wuss'

"Obama hasn't passed a budget in four years, he's a wuss," Sununu, a Republican, said Thursday on CNN's "Piers Morgan Tonight." "Obama has rejected the recommendation of his own Simpson-Bowles, on a budget package, he's a wuss. He wants to lead from behind, he's a wuss."

(CNN) - As both sides of the aisle put political spin on Friday's job report, outspoken Mitt Romney surrogate John Sununu weighed in, calling the White House and advisers' comments on the report "numb and dumb."

"They're numb because they're insensitive to the 25 million people that are unemployed and underemployed. And they're dumb because they're deceptive," the Romney national campaign co-chairman said Friday on CNN's "The Situation Room."
END_OF_DOCUMENT_TOKEN_TO_BE_REPLACED

Appearing on CNN's "The Situation Room with Wolf Blitzer," Sununu said he regretted using those words on a campaign conference call.
END_OF_DOCUMENT_TOKEN_TO_BE_REPLACED 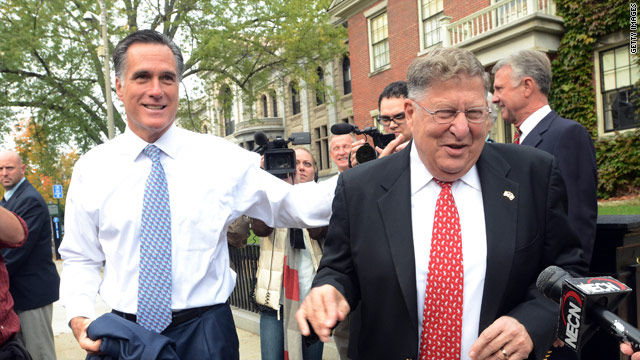 (CNN) – A fellow Republican former governor offered some advice on Thursday to the Romney campaign in light of a scathing Wall Street Journal editorial that suggests the front runner's campaign is proving ineffective.

When CNN's Wolf Blitzer asked former New Hampshire governor and high profile Romney surrogate John Sununu if he had any advice for the candidate, Sununu said that his own party should be more concise, using more “declarative sentences.”
END_OF_DOCUMENT_TOKEN_TO_BE_REPLACED