Conservative activist Brent Bozell, chairman of the group ForAmerica, obtained the list and plans to send a letter blasting Crossroads' role in last year's election and the creation of its new independent group for the 2014 mid-term elections.
END_OF_DOCUMENT_TOKEN_TO_BE_REPLACED

(CNN) - As if the relationship between the tea party and veteran GOP strategist Karl Rove wasn't stained enough, the Tea Party Patriots apologized Tuesday for blasting out an email with an edited image of Rove wearing a Nazi uniform.

Washington (CNN) – Don’t look for Virginia Gov. Bob McDonnell to choose between celebrity businessman Donald Trump and Karl Rove, the Bush adviser who’s been at the end of Trump’s ire on Twitter.

“I know both of them. They're all good Republicans. We have good disagreements, just like the other side. And when you lose after a presidential race, there's always this soul searching. I think it's healthy,” McDonnell said on Monday’s edition of CNN’s “Erin Burnett Outfront.”
END_OF_DOCUMENT_TOKEN_TO_BE_REPLACED

Steve King: Karl Rove 'launched a crusade against me'

(CNN) - Rep. Steve King hasn't even declared whether or not he will run for the U.S. Senate.

But on Thursday the Iowa Republican sent a plea to supporters charging veteran GOP strategist Karl Rove was marshalling forces against him in a preemptive effort to push him out of the race.
END_OF_DOCUMENT_TOKEN_TO_BE_REPLACED

Rove on new group: 'I don't want a fight'

Karl Rove, the former top political adviser to President George W. Bush and co-founder of American Crossroads and Crossroads GPS, said his new group wasn't meant to protect incumbents, but instead to shepherd candidates with a shot at winning a general election through tough primaries.
END_OF_DOCUMENT_TOKEN_TO_BE_REPLACED 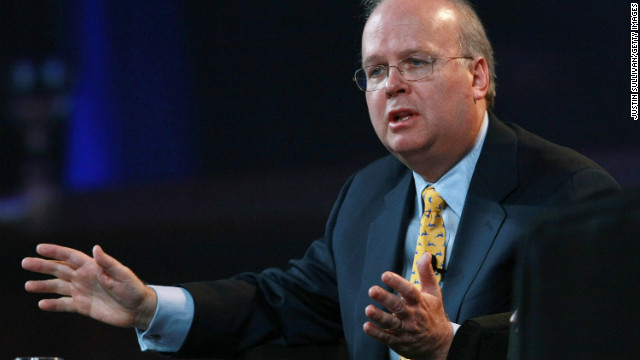 Washington (CNN) - Some Republicans see Karl Rove as a political genius, masterminding winning campaigns at every level on the ballot, including the White House. Others call him a "fake conservative" and a symbol of what's wrong with the party.

A Rove-affiliated super PAC's efforts to push what it believes will be more electable congressional candidates - and the backlash it has created - is symbolic of the battle for the soul of the GOP.

As he does with other Crossroads groups, former Bush political adviser Karl Rove will advise this new organization, which will be led by Steven Law, the president of both American Crossroads and its advocacy sister Crossroads GPS.
END_OF_DOCUMENT_TOKEN_TO_BE_REPLACED

Washington (CNN) - Officials from the Republican super PAC American Crossroads, including its co-founder Karl Rove, defended their campaign spending and talked about the group's future during a conference call Thursday with 50 of its top donors.

Participants agreed they would not discuss the contents of the call with the media.
END_OF_DOCUMENT_TOKEN_TO_BE_REPLACED

(CNN) – Newt Gingrich and Mike Huckabee both had harsh words for conservative strategist Karl Rove on Sunday after Rove joked about murdering GOP U.S. Rep. Todd Akin, whose controversial comments about rape and pregnancy drew the ire and condemnation of most Republicans. Both Gingrich and Huckabee referred to former U.S. Rep. Gabrielle Giffords as they condemned Rove's joke.

"We should sink Todd Akin. If he's found mysteriously murdered, don't look for my whereabouts," Rove said Thursday at a private fund-raiser, according to a Businessweek reporter who was not supposed to be there.
END_OF_DOCUMENT_TOKEN_TO_BE_REPLACED

"We should sink Todd Akin. If he's found mysteriously murdered, don't look for my whereabouts," Rove said Thursday at a private fundraiser, according to a Businessweek reporter who was not supposed to be there.
END_OF_DOCUMENT_TOKEN_TO_BE_REPLACED