Washington (CNN) - News that the Obama administration met critical repair goals for HealthCare.gov brought almost no applause from Capitol Hill Sunday, with just a few members of Congress responding to the website progress report at all.

Of those who responded, most either indicated that they expect more issues or that they saw the website as the beginning of Obamacare's problems.

END_OF_DOCUMENT_TOKEN_TO_BE_REPLACED

(CNN) – They didn’t actually throw sticks and stones, but a congressional debate in Minnesota Thursday was every bit as schoolyard.

It didn't take long for the showdown to turn ugly with accusations flying over who was the bigger liar and jabs escalating into a fight over the two candidates' respective divorces.
END_OF_DOCUMENT_TOKEN_TO_BE_REPLACED

Charlotte, North Carolina (CNN) – Democratic Rep. Keith Ellison, one of only two Muslim-Americans in Congress, reacted Thursday to the controversy over his party's newly-updated platform that references Jerusalem as being the capital of Israel.

"I do not want to see this issue used as a cudgel to beat on the president with," Ellison said. "They're trying to use the issue of the Israeli-Palestinian conflict as a way to divide people."
END_OF_DOCUMENT_TOKEN_TO_BE_REPLACED

(CNN) - Two Democratic lawmakers Tuesday called on Mitt Romney to back up his words with action regarding his position on extending the lowered student loan interest rates.

"Young Americans and students should be very suspicious of Romney's efforts to have it both ways," Democratic Rep. Chris Van Hollen of Maryland said on a conference call organized by the Democratic National Committee.
END_OF_DOCUMENT_TOKEN_TO_BE_REPLACED 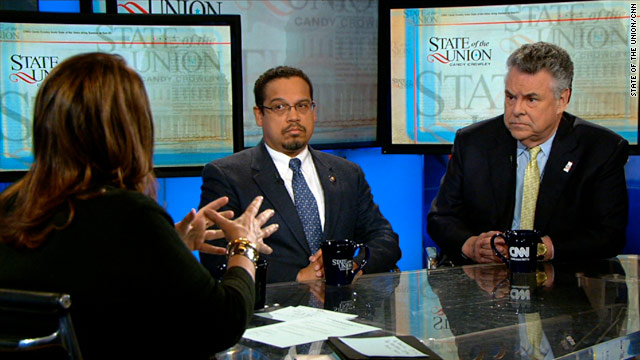 The issue will be discussed in the upcoming week as King, the chairman of the House Homeland Security Committee, holds hearings on the radicalization of Muslim Americans. Democratic Minnesota Rep. Keith Ellison, the first Muslim elected to Congress, openly disagreed with the premise of the hearings as King gave a preview Sunday on CNN's "State of the Union" with Candy Crowley of what will be discussed Thursday on the Hill.
END_OF_DOCUMENT_TOKEN_TO_BE_REPLACED