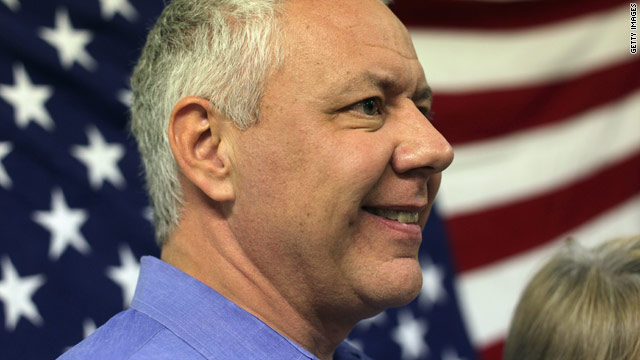 Buck is not endorsing a candidate in the presidential race before Tuesday's caucuses, though the campaigns of Mitt Romney and Rick Santorum both reached out.
END_OF_DOCUMENT_TOKEN_TO_BE_REPLACED

(CNN) - Colorado Sen. Michael Bennet claimed victory in his bid for a full term Wednesday, but his Republican opponent has yet to concede the race.

Greenwood Village, Colorado (CNN) - Nearly six hours after polls closed in Colorado, the campaigns in the Senate race called it a night with no winner and no concessions.

Republican Ken Buck and Democratic Sen. Michael Bennet are locked in a race that is too close to call. With 81 percent of the vote counted, Buck holds a slight lead over Bennet, 49 percent to 47 percent.
END_OF_DOCUMENT_TOKEN_TO_BE_REPLACED

Colorado Senate race down to the wire

Greenwood Village, Colorado (CNN) - In one of the tightest Senate races in the country, incumbent Democratic Senator Michael Bennet is working down to the wire to get voters to the polls. He spent part of the day in Boulder, where he encouraged college students to vote. He's ending his day in Denver.

Going into Election Day, he said he expected the race could come down to a few hundred votes. Democrats are counting on their grassroots efforts to make the difference for them.
END_OF_DOCUMENT_TOKEN_TO_BE_REPLACED

(CNN) - Less than a week before Election Day, Colorado's heated Senate race remains a virtual dead heat, according to a new poll.

Democrats, however, may be pulling away in the race for governor - a contest in which Republicans once had high hopes.

Colorado's Ken Buck on Christmas Trees and the First Amendment

Denver, Colorado (CNN) - In an interview with CNN, Colorado's Republican Senatorial nominee Ken Buck made clear he believes in the separation of church and state. He defended comments he made last year during a candidates forum in which he challenged the way courts have interpreted the First Amendment's religious protections.

Buck told CNN, "I have said I agree with the establishment clause. I agree with the idea that there is a separation of church and state. That teachers should not be leading prayer – a particular kind of prayer in classrooms. What I have said is that I think the federal government and we as a society have come too far in trying to separate good organizations that perform good functions for people just based on the fact one has a religious association and one doesn't."
END_OF_DOCUMENT_TOKEN_TO_BE_REPLACED

(CNN) - Candidates in the upcoming Colorado Senate election faced off Saturday in a televised debate, sparring on everything from abortion to the war in Afghanistan, but focusing on jobs and the economy.

The contest is close and one of the most hotly-debated races in the nation. The two men exchanged arguments for an hour in a debate aired by KCNC, which is not a CNN affiliate.

(CNN) - Colorado voters have a clear choice in the state's upcoming Senate election, as demonstrated by a nationally televised debate Sunday.

Republican Ken Buck, a conservative backed by the Tea Party movement, said in the debate broadcast on the NBC program "Meet the Press" that homosexuality is a choice and that he favors a constitutional amendment requiring a balanced budget.