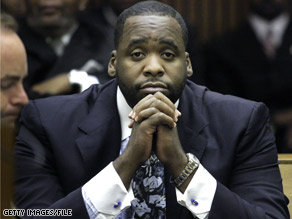 (CNN) - Former Detroit Mayor Kwame Kilpatrick on Thursday was sentenced to 28 years in prison after he was convicted in March of two dozen federal charges.

The charges include racketeering, extortion and the filing of false tax returns. He was accused of using the mayor's office to enrich himself and associates.

Kilpatrick, his beard overgrown and bushy, was escorted out of Michigan's Wayne County jail, dodged a crowd of reporters before getting into a car and being driven away, according to television footage from CNN affiliate WXYZ.

Kilpatrick spent 100 days in jail as part of a plea agreement connected to a sex scandal that rocked Detroit and caused the city council and governor of Michigan to push to impeach him.

Kilpatrick also agreed not to run for public office during his five years of probation.

END_OF_DOCUMENT_TOKEN_TO_BE_REPLACED

Kilpatrick will go to jail on October 28, the day of his sentencing, and serve 120 days, she said.

The mayor pleaded guilty in Wayne County Circuit Court to two counts of obstruction of justice.

"I lied under oath in the case of Gary Brown and Harold Nelthrope versus the city of Detroit," Kilpatrick said, reading from a prepared statement.

"I did so with the intent to mislead the court and jury and to impede and obstruct the fair administration of justice."

Hearing set to see if Detroit mayor should lose his job

In a court order dated August 25, Michigan Gov. Jennifer Granholm stated that the hearing will be held on September 3.

Along with fighting for his job next week, Kilpatrick is fighting to stay out of prison, as he has been charged with several felonies.

Kilpatrick has been embroiled in a public scandal since January, when the Detroit Free Press reported he had exchanged romantic text messages with his former chief of staff, Christine Beatty, indicating the two were involved in an affair.

At a police whistle-blower trial in 2007, the pair, under oath, denied any romantic involvement.

Kilpatrick has been charged with perjury, obstruction of justice and assault, and served a recent jail stint for violating the terms of his bail, all in connection with the sex scandal with his former chief of staff.

[cnn-photo-caption image= http://i2.cdn.turner.com/cnn/2008/CRIME/08/07/mayor.jailed.ap/art.kwame.jpg caption="Detroit Mayor Kwame Kilpatrick apologized but a federal judge ordered him jailed for violating the terms of his bond."]
(CNN) - A judge Thursday ordered Detroit Mayor Kwame Kilpatrick jailed after determining he violated terms of his bond by taking an unauthorized trip to Canada last month.

Kilpatrick, who is facing felony charges of perjury, obstruction of justice and misconduct of office, has been free on $75,000 bond. He has been snarled in a public scandal since January, when the Detroit Free Press reported that he had exchanged romantic text messages with his former chief of staff, Christine Beatty, indicating the two were involved in an affair. He and
Beatty, testifying last fall in a whistle-blower trial, had denied they had been having an affair.

Kilpatrick attorney Jim Parkman said an immediate appeal is planned. He noted that Kilpatrick's trip "wasn't a personal trip over there to go to Caesar's Palace and play" but a trip on Detroit business.

"He believes it was the right thing to do, and on the spur of the moment, he just went," Parkman told reporters.

DETROIT, Michigan (CNN) - Detroit Mayor Kwame Kilpatrick defiantly declared his innocence just an hour after a prosecutor charged him with perjury and other felonies.

"This has been a very flawed process from the beginning," said Kilpatrick. "I look forward to complete exoneration."

Earlier Monday, Wayne County Prosecutor Kym L. Worthy announced that she would charge Kilpatrick with multiple counts of perjury, obstruction of justice and misconduct in office in connection with accusations that Kilpatrick lied in court about a romantic affair and the firing of police officers.

Watch Kilpatrick's response to the charges

Kilpatrick, who is married, has been snarled in a well-publicized sex scandal since January after The Detroit Free Press reported he exchanged romantic text messages with his then-chief of staff, Christine Beatty.

The newspaper report contradicted testimony Kilpatrick gave in a court case brought by police officers against the mayor and the city of Detroit for misconduct in the mayor's office. The case alleged the mayor retaliated against the officers for their role in investigating his office. Critics alleged that Kilpatrick committed perjury and called for his resignation.

Prosecutor Kym Worthy said that "even children understand that lying is wrong. Witnesses must give truthful testimony."

Worthy said she will seek perjury, official misconduct and obstruction of justice charges.