Washington (CNN) - Members of the House Ethics Committee have voted unanimously to spend up to $500,000 extending the contract of a special counsel examining alleged wrongdoing by California Rep. Maxine Waters, according to a committee statement released Thursday.

Prominent Washington attorney Billy Martin was hired to take charge of the roughly three-year investigation last summer, at a cost of up to $800,000, in order to investigate reports of possible improper communication between committee attorneys and lawmakers on the ethics panel. His contract has been extended twice and runs through the end of the current Congress. 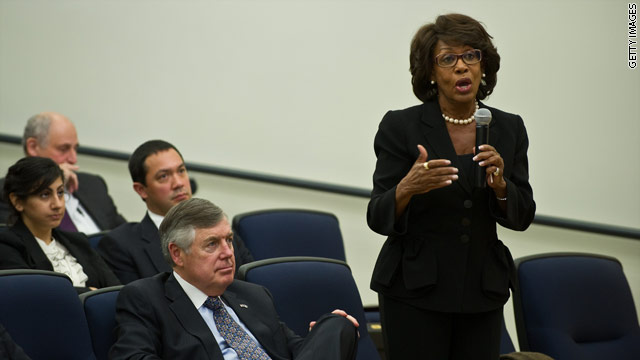 Waters: Some black lawmakers are hesitant to criticize Obama

(CNN) - Rep. Maxine Waters, D-California, questioned why President Barack Obama has not visited any black communities during his recent Midwestern bus tour, saying some black lawmakers are hesitant to criticize him.

Waters, explained to a crowd in Detroit this week, that members of the Congressional Black Caucus are hesitant to criticize Obama because they feel they may lose support from the black community.

Washington (CNN) – A California congresswoman under investigation by the House ethics committee delayed plans Thursday to force a House vote on a measure that would launch an investigation into the committee for its handling of her case.

Rep. Maxine Waters, D-California, has been accused of seeking federal assistance for OneUnited Bank, a minority-owned bank in which her husband held a financial interest. She has vehemently denied any wrongdoing and has repeatedly demanded a conclusion to the almost year-and-a-half-long investigation.
END_OF_DOCUMENT_TOKEN_TO_BE_REPLACED

Washington (CNN) - Rep. Maxine Waters, D-California, will offer a "privileged resolution" as early as today calling on the House to investigate the ethics committee for its handling of her case.

Waters' hearing before the Committee on Standards and Official Conduct was scheduled to begin last month, but the committee announced before Thanksgiving that the proceeding had been canceled due to the discovery of email communications that would potentially affect the case. The committee also suspended two staff lawyers working on the case.
END_OF_DOCUMENT_TOKEN_TO_BE_REPLACED

Washington (CNN) - Rep. Maxine Waters, D-California, called on the House ethics committee Monday to either schedule her trial before Congress completes this year's lame duck session or explain why it won't go forward.

Waters' hearing before the committee was scheduled to begin Monday, but the ethics committee announced before Thanksgiving that the proceeding had been canceled due to the discovery of e-mail communications potentially affecting the case.

Waters ethics hearing will not be held

Washington (CNN) - A House ethics subcommittee trial originally scheduled for Rep. Maxine Waters, D-California, on November 29 will not be held, according to an ethics committee statement released Friday.

The committee decided to instead return the issue to investigators "due to materials discovered that may have had an effect" on the case, the statement said.

House ethics hearings on Rangel, Waters will be after elections

Washington (CNN) - The House ethics committee will hold trial-like hearings on allegations against two Democratic members - Rep. Charles Rangel of New York and Rep. Maxine Waters of California - after the November 2 congressional elections in which both are running, the panel's chairwoman announced Thursday.

Washington (CNN) - In a highly unusual move, every Republican member of the House ethics committee issued a statement Tuesday blasting the Democratic chairwoman for "stalling" on making a decision on whether to hold trials for New York Democratic Rep. Charlie Rangel and California Democratic Rep. Maxine Waters before November's election.

"Members of the Committee have repeatedly expressed their willingness and desire to move forward with public trials of these matters and have repeatedly made themselves available to the Chairwoman for October settings. In past Congresses, Committee Members have returned to Washington during a recess in an effort to conclude pressing Ethics matters," said the statement, signed by ranking Republican Jo Bonner and the four other GOP lawmakers on the committee.

END_OF_DOCUMENT_TOKEN_TO_BE_REPLACED

Washington (CNN) - A defiant Rep. Maxine Waters, D-California, insisted Friday that neither she nor her staff broke any House rules. Waters also blasted the House ethics committee for failing to schedule a trial that, according to her, would allow her to clear her name.

Given the fact that the committee's investigation has now lasted for over a year, "such a delay is unacceptable," she told reporters at a Capitol Hill news conference.

"This case is about fairness," she said. Due process has been denied, and ethics investigators have ignored "key pieces of exculpatory evidence."

Waters, a ten-term Los Angeles congresswoman, is alleged to have helped steer federal bailout money to Massachusetts-based OneUnited Bank - in which her husband had a financial stake. She has repeatedly denied any wrongdoing.