Rogers, who chairs the House Intelligence Committee, cautioned that he doesn’t think sending in combat troops is necessarily beneficial at this point. But he also said President Obama is giving away too much strategically by placing such strict limits on the U.S. military role up front. END_OF_DOCUMENT_TOKEN_TO_BE_REPLACED

Obama ‘confident’ in CIA director; some in Senate aren’t so sure

Washington (CNN) – Will an apology be enough to soothe the strained relations between the CIA and members of the Senate Intelligence Committee? It’s a critical lingering question in the rare public spat between the intelligence agency and the lawmakers charged with the agency’s oversight.

Tempers on the committee flared in recent months over reports that the CIA spied on computers used by intelligence committee staffers. A CIA inspector general’s report confirmed these reports this past week, prompting CIA Director John Brennan to apologize to committee members Thursday. However, some members aren’t satisfied, citing Brennan’s previous remarks that batted down the spying accusations

“I don't think an apology is enough,” Independent Sen. Angus King of Maine told CNN’s Candy Crowley on “State of the Union.” “I think we've really got to have some serious discussions about John Brennan, find out what he knew about this when he was making those statements, what he knew about it at the time. I'm not calling for his resignation, but I'm pretty skeptical right now.”

In contrast, the White House reconfirmed support of Brennan.

END_OF_DOCUMENT_TOKEN_TO_BE_REPLACED

(CNN) –– Rep. Mike Rogers, the chairman of the House intelligence committee, said Sunday the suspect in the Benghazi attacks "likely" did not provide useful intelligence during his two-week detention aboard a ship to the United States.

The White House announced the capture earlier this month of Ahmed Abu Khatallah - the suspected ringleader of the September 2012 attacks on the U.S. mission in Benghazi, Libya, that resulted in the deaths of four Americans.

END_OF_DOCUMENT_TOKEN_TO_BE_REPLACED

Washington (CNN) - While most in Washington fret about the potential return of five former Guantanamo detainees to the front lines in Afghanistan, the former head of U.S. operations in the war-torn country says the Taliban is now worse off after the swap for U.S. Army Sgt. Bowe Bergdahl.

Retired Marine Gen. James Mattis, the former chief of the U.S. Central Command, or CENTCOM, said Sunday on CNN's "State of the Union" that President Barack Obama's decision to trade five Taliban hardliners for Bergdahl should give the United States military more latitude to combat the Taliban.

END_OF_DOCUMENT_TOKEN_TO_BE_REPLACED

Rogers on negotiating for soldier's release: 'We have now set a price'

(CNN) – Releasing five Guantanamo Bay detainees in exchange for the return of U.S. Army Sgt. Bowe Bergdahl was a "dangerous" decision that could set a risky precedent for future kidnappings of Americans, according to Rep. Mike Rogers, who chairs the House Intelligence Committee

"We have now set a price," the Michigan Republican said Sunday on CNN's "State of the Union." "We have a changing footprint in Afghanistan, which would put our soldiers at risk for this notion that 'If I can get one, I can get five Taliban released.'"

END_OF_DOCUMENT_TOKEN_TO_BE_REPLACED

Pelosi: Cheney is ‘proud’ of Bush-era CIA that misled public

(CNN) – House Minority Leader Nancy Pelosi said former Vice President Dick Cheney "set a tone and attitude for the CIA" that allowed for the controversial techniques used by the agency in the Bush-era detention and interrogation program.

Her comments follow a Senate Intelligence Committee vote last week to release key parts of a report that concludes the CIA misled the government and public about aspects of the agency’s practices in the post-9/11 program.

END_OF_DOCUMENT_TOKEN_TO_BE_REPLACED

Washington (CNN) - Rep. Mike Rogers said Sunday that while he’s calling it quits from Congress, he’ll stay active in politics by hosting a new national radio program, which might even serve as a launchpad for a 2016 presidential run.

The Michigan Republican said last week that he isn’t running for re-election this fall, after serving a little over a decade in office, the last few years as chairman of the House Intelligence Committee.

END_OF_DOCUMENT_TOKEN_TO_BE_REPLACED 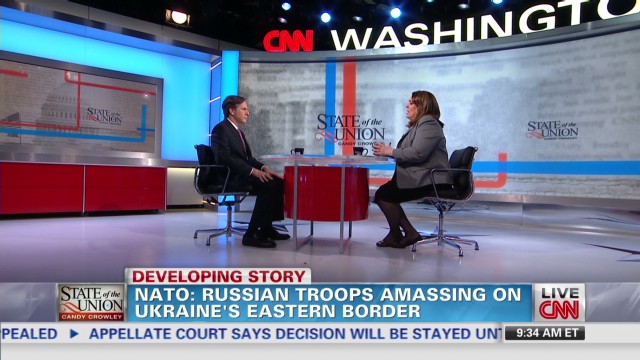 For another week, the Sunday political talk shows focused on the missing Malaysian plane and Russian President Vladimir Putin’s aggressive actions in Ukraine.