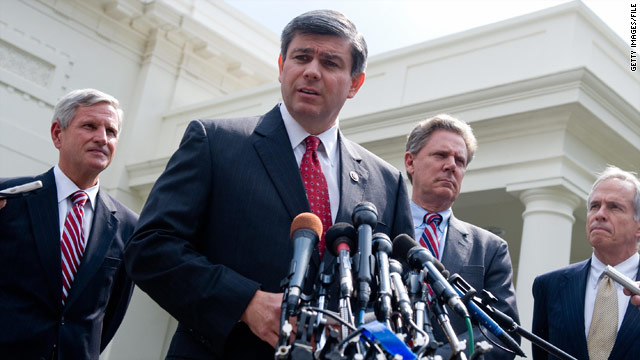 END_OF_DOCUMENT_TOKEN_TO_BE_REPLACED

Blue Dog will vote against bill with public option

[cnn-photo-caption image= http://i2.cdn.turner.com/cnn/2009/images/09/08/art.mikeross.gi.jpg caption="Ross is splitting from many of the liberal members of his party in Congress who have said they will oppose any bill that does not include a public option."]

(CNN) - A key member of a group of conservative House Democrats announced Tuesday that he will vote against a health care bill if it includes a government-run insurance option.

Arkansas Rep. Mike Ross, a leading member of the Blue Dog Coalition, called a public option the "wrong direction for health reform" and said he decided to oppose it after speaking with his constituents at home.

"If House leadership presents a final bill that contains a government-run public option, I will oppose it," Ross said in a statement. "I will also oppose any bill that provides federal funding for abortions or illegal immigrants and I will never vote for a bill that rations care for seniors or anyone else."

Ross is splitting from many of the liberal members of his party in Congress who have said they will oppose any bill that does not include a public option.

In July, Ross urged congressional leaders to slow down the pace of health care negotiations and said reform "needs to be done in a deliberate, bipartisan and common sense way."

Conservative Democrat gets The Last Word

Click to watch video
WASHINGTON (CNN) – A member of the Democratic Blue Dog Coalition, a group of more moderate to conservative Democrats in the House of Representatives, predicted Sunday that the version of health care reform legislation currently being hashed out by bipartisan negotiators in the Senate Finance Committee will come to dominate the reform debate.

“At the end of the day, there’s going to have to be some common ground here,” Rep. Mike Ross of Arkansas said on CNN’s State of the Union, when asked about viability of a public insurance option in any reform legislation.

“The reality is that it takes sixty percent to get this done in the Senate. It’s probably going to have to be bipartisan in the Senate – which I think it should be,” Ross said.

“I know that a lot of members of my party in the House don’t want to hear this,” said Ross, but “my guess is about 90 percent [of the final bill presented to the White House] will be reflected from what’s in the Senate Finance Committee bill.”

Ross also took the opportunity to lay down his guiding principles for health care reform.

Arkansas Rep. Mike Ross, a key member of the fiscally conservative Blue Dog coalition, said he remains concerned that the legislation currently being pushed through Congress does not do enough to rein in spiraling medical costs.

Ross' comments came a day after the top Democrat in the U.S. Senate said the chamber won't vote on a health care reform bill until after the upcoming August recess.

The announcement by Senate Majority Leader Harry Reid of Nevada went against President Barack Obama's stated timetable for both the House and Senate to turn out bills by the August break.