Lawyer: Franken could be deciding factor in stimulus package

[cnn-photo-caption image= http://i2.cdn.turner.com/cnn/2009/images/02/04/art.frankengrin0204.gi.jpg caption="Lawyers for Al Franken were in court Thursday in Minnesota."]

ST. PAUL, Minnesota (CNN) - An attorney for Democrat Senate candidate Al Franken told the Minnesota Supreme Court Thursday that Gov. Tim Pawlenty and Secretary of State Mark Ritchie have an "obligation" to sign an election certificate, warning that President Obama's stimulus package could be "lost" without Franken's one vote.

A statewide recount put Franken in the lead over Republican incumbent Norm Coleman in early January, but Minnesota Sen. Amy Klobuchar has been flying solo since the Senate convened due to a pending legal battle brought by Coleman.

"The nation's business is going on as we speak," Franken attorney Marc Elias told the panel of justices. "You need no further than read the newspaper to know that it may be that the fate of a stimulus package hinges on one vote in the United States Senate. For want of a vote, a stimulus package may be lost."

Elias said that the pending post-election trial - now nearing the completion of it's second week - could continue "for many more weeks or months."

END_OF_DOCUMENT_TOKEN_TO_BE_REPLACED

[cnn-photo-caption image= http://i2.cdn.turner.com/cnn/2009/images/02/04/art.frankengrin0204.gi.jpg caption="A law proposed by a Minnesota legislator would allow Democrat Al Franken to be seated provisionally in the U.S. Senate while a post-election lawsuit filed by Republican Norm Coleman is pending."]
MINNEAPOLIS, Minnesota (CNN) - A Minnesota state representative has introduced a bill that - if passed - would result in the seating of Democrat Al Franken as Minnesota's junior senator, at least temporarily.

State Rep. Phyllis Kahn, a Democrat, introduced a bill in the Minnesota legislature Monday that would provisionally seat the winner of the statewide recount in instances where a post-election lawsuit is imminent.

If passed, it would take effect immediately, allowing Franken would be seated in the interim period while the legal battle brought by former Republican Sen. Norm Coleman plays out in court.

END_OF_DOCUMENT_TOKEN_TO_BE_REPLACED

(CNN) – A three-judge Minnesota court ruled Tuesday that approximately 4,800 out of a total of nearly 12,000 rejected absentee ballots would be considered in Republican Norm Coleman's effort to retain his Senate seat.

"This is a victory for thousands of Minnesotans whose rejected absentee ballots will now be properly reviewed in this election," Ben Ginsberg, a legal spokesman for the Coleman campaign said in a statement released Tuesday. "We've continually called for every valid vote to be counted, and counted only once. This is a strong step in the right direction, and we applaud the decision of the court today."

The Franken campaign said the ruling brought some certainty to the litigation to determine who will be declared the winner in the razor-thin race.

The "universe [of Coleman's case] has now come to a defined place," Franken attorney Marc Elias said in a statement Tuesday. "We now know the scope of ballots they will be permitted to argue from."

END_OF_DOCUMENT_TOKEN_TO_BE_REPLACED

Despite long odds, Coleman confident he will beat Franken

WASHINGTON (CNN) - Sen. Norm Coleman, R-Minnesota, began packing his Capitol Hill office Wednesday, but indicated he has no intention of giving up his legal fight to serve another term in Congress.

Coleman trails Democrat Al Franken by 225 votes. But in an interview with CNN, Coleman called Franken’s lead “artificial,” and expressed hope that the Minnesota courts will rule in his favor on ballot disputes when they take up the question next week.

“I really do have a sense of confidence that this will work itself out the right away,” Coleman said.

END_OF_DOCUMENT_TOKEN_TO_BE_REPLACED

Recount update: No official recount result until at least next week

[cnn-photo-caption image= http://i2.cdn.turner.com/cnn/2008/images/12/18/art.getty.minn.recount.jpg caption="Recount begins in tightly-contested Minnesota Senate race."]
MINNEAPOLIS, Minnesota (CNN) – Minnesota Secretary of State Mark Ritchie said after a long day of reviewing more challenged ballots Wednesday that a certification of recount results in the race between Republican Norm Coleman and Democrat Al Franken in Minnesota's Senate race would not be released until next week, assuming the review of challenged ballots ends on Friday.

But a few unresolved issues still remain. One is the question over what to do with improperly rejected absentee ballots: The state canvassing board-the entity of judges, along with Ritchie, charged with overseeing the recount-has asked for counties to begin the process of reviewing and counting those. However, the Coleman campaign has said there is no "uniform" method for doing so.

Wednesday, the state Supreme Court heard the Coleman team's arguments and said a decision is "forthcoming."

END_OF_DOCUMENT_TOKEN_TO_BE_REPLACED 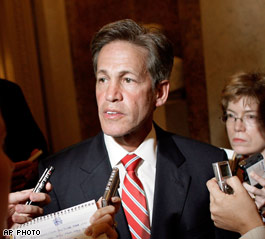 The Coleman ad says, “What is really ridiculous is that Al Franken helped raise money for MoveOn.org to pay for ads like the one they did smearing General Petraeus and undermining our troops in the field.”

Replying to the ad, a Franken spokesperson tells CNN, “Minnesotans want Norm Coleman to vote to end the war and bring the troops home. He won’t stand up to this president, so instead he’s taken out an ad criticizing Al for criticizing a Senate resolution that criticized MoveOn.org for taking out an ad criticizing General Petraeus. Ridiculous is exactly the right word.”

Franken and attorney Mike Ciresi are competing for the Democratic nomination to run against Coleman next fall.