[cnn-photo-caption image= http://i2.cdn.turner.com/cnn/2010/images/05/03/art.moveonban0503.yt.jpg caption="MoveOn is out with a new TV ad asking President Obama to reconsider a new policy."]
Washington (CNN) – An outspoken liberal advocacy group is using a new television advertisement to take on President Obama over his recent decision to expand the areas available for offshore oil drilling.

Last month, the president announced a new policy that opens up large swaths of U.S. coastal waters in the Atlantic Ocean and the Gulf of Mexico to oil and natural gas drilling. Three weeks later, an offshore oil rig exploded and collapsed, creating a massive oil slick that threatens the Gulf Coast region.

Friday Obama maintained his commitment to the new policy.

"So, let me be clear," the president said, "I continue to believe that domestic oil production is an important part of our overall strategy for energy security, but I've always said it must be done responsibly, for the safety of our workers and our environment."

"Sometimes great leaders are tested," the narrator says in MoveOn's new 30-second television ad as images of President Obama in the Gulf Coast region appear on the screen. "For decades, oil companies have dictated our energy policy," the commercial claims. "President Obama, will you lead our country into the clean energy future?," the ad queries.
END_OF_DOCUMENT_TOKEN_TO_BE_REPLACED

Washington (CNN) – An influential liberal advocacy group shifted gears and is getting behind President Obama's push for health care reform even though its membership believes it doesn't go far enough.

MoveOn.org is spending "six figures" on television commercials to run on national cable and called on its membership to back primary challengers to Democrats who vote against health care reform legislation.

For the past year, MoveOn.org advocated that a public option be included in the overhaul health care reform. But the leadership of the member driven organization took a poll of its membership last week to see if it wanted to support the president's push. And 83 percent of them did.

"Our members still totally believe that the public option is the best way to lower costs and make health care affordable," said Ilyse Hogue, spokeswoman for MovOn.org. "And at the same time they overwhelmingly believe that the president's plan is the best way to keep health care reform moving forward and this is a necessary step."
END_OF_DOCUMENT_TOKEN_TO_BE_REPLACED

(CNN) - MoveOn – which has spent millions this fall on campaigns pressing conservative Democrats to support health care reform – is now calling on members to fight the bill currently being considered by the Senate.

The group has launched a petition drive to push liberal lawmakers like Vermont Sen. Bernie Sanders, an independent who caucuses with Democrats, and Wisconsin Sen. Russ Feingold to block the bill in its current form unless significant changes are made.

Earlier this week, Sanders indicated he was not sure he could back the bill as it now stands.

"(T)here's enormous pressure from all sides to pass a bill quickly, no matter how weak it is," MoveOn organizers said in a message sent to members Friday. "Let's show Bernie and other progressives that we're counting on them to block this version of the bill–and we'll get their backs if they do."

END_OF_DOCUMENT_TOKEN_TO_BE_REPLACED

(CNN) - Alaska Gov. Sarah Palin's political action committee is confirming a flood of new donations that push her cash haul close to the million-dollar mark, as one of the nation's largest liberal PACs announced an ad targeting the former GOP vice presidential candidate.

Palin spokeswoman Meg Stapleton confirmed a report in the Anchorage Daily News that more than $200,000 had poured into SarahPAC since Palin's announcement a week and a half ago that she would be leaving office by the end of the month.

Those funds, along with $732,867 received through June 30 according to federal campaign finance filings, leave the governor just shy of a million dollars in donations to date since SarahPAC's January launch.

END_OF_DOCUMENT_TOKEN_TO_BE_REPLACED

"Given recent comments showing that Senator Hagan is not supporting the public health insurance option, MoveOn.org will be making clear that our 115,000 members in North Carolina - many of whom volunteered for or donated to her campaign last year - believe the public option is the heart of true health care reform," the group said in a statement. "We'll run ads in North Carolina and D.C. asking that she advocate for the public option and support the President in truly solving the nation's health care crisis."

Earlier this week, Hagan told the Greensboro News & Record that a government plan could pose a major threat to private insurance companies.

END_OF_DOCUMENT_TOKEN_TO_BE_REPLACED

(CNN) - MoveOn.org is targeting a Democratic senator Friday over her apparent opposition to the health care proposal President Obama has proposed.

In a radio ad airing in the New Orleans market, the liberal political action committee criticizes Louisiana Sen. Mary Landrieu for expressing opposition to legislation that would provide Americans with a choice of public health care.

"Why is Mary Landrieu opposing the president's plan to provide health care choices for all Americans, including the option to join a high quality public health insurance plan?" the ad's narrator says, noting the senator has received "$1.6 million in campaign contributions from the health care industry - the same industry that's now spending millions to stop the president's plan."

After initially signaling she would be in favor of a public option last year, Landrieu told reporters last week she was against any health care reform package that offered such a policy.

"I'm not open to a public option," she said. "However, I will remain open to a compromise, a full compromise. [A] public option is not something that I support. I don't think it's the right way to go."

END_OF_DOCUMENT_TOKEN_TO_BE_REPLACED

[cnn-photo-caption image= http://i2.cdn.turner.com/cnn/2009/images/02/10/art.getty.eli.pariser.jpg caption="Eli Pariser, pictured above, is the committee’s former executive director."](CNN) –- MoveOn.org named a new executive director Tuesday to head up the daily operations of one of the largest liberal political action committees in the nation.

Former National Organizing Director Justin Ruben was appointed to the post, held until recently by Eli Pariser. Ruben, a long-time political organizer, aided in the establishment of the group’s field organizing program, and headed the 2006 “Call for Change” campaign that facilitated in the election of a Democratic congressional majority, and served as a supervisor for two years in MoveOn's issue campaigns.

"I am honored to take the helm of this organization at this critical moment," said Ruben. "Our five million members stand ready to fight for President Obama's progressive agenda of creating jobs, developing a new green economy, providing health care for all and ending the war in Iraq."

Eli Pariser, the committee’s former executive director, will transition to president of the board.

MoveOn.org supported Barack Obama’s White House bid, a first-time endorsement move for the PAC. Since the organization’s inception, the 527 turned 501(c)(4) organization has spent millions of dollars on ad campaigns and grassroots organizing. 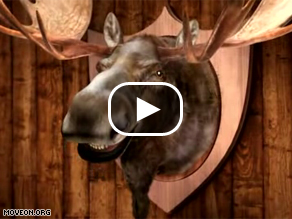 Watch: In the latest MoveOn.org ad a talking moose takes aim at the McCain-Palin ticket.

(CNN)– A talking moose is the latest star of an anti-McCain-Palin ad put out by MoveOn.org Monday, taking aim at the Alaska governor’s experience and record.

“You really gotta question John McCain’s judgment pickin’ Sarah Palin as his VP,” the moose, which is mounted on a wall says.

Watch: A talking moose stars in a new ad

“We know her up here. She doesn't have any national security experience,” the moose says. “She can't even explain Bush's war policy. But she supports his war. And now she's an expert because she can see Russia?”

The 30-second spot, “Moose,” will literally follow Gov. Palin across the country as she campaigns for these final weeks.

According to MoveOn.org, the ad will air in towns and cities one day in advance of Palin’s scheduled appearances in those areas, beginning Monday in Las Vegas ahead of her Tuesday campaign stop.

Since Congress’ five-week long recess began last Friday, some House Republicans have taken to the House floor every weekday to protest Congress’ failure to vote on an energy bill.

“The political theatrics in the House this week are brought to you by the Party that’s been sold to Big Oil,” said Noah T. Winer, in a statement released by MoveOn Thursday. “They are playing politics instead of offering solutions,” Winer, a campaign director at MoveOn also said in the statement.

Newt Gingrich, former Republican Speaker of the House, met with House Republicans Wednesday, followed by a Capitol Hill press conference. The GOP protest is being support by a burgeoning movement of conservative online political activists.

New pro-Obama ad to air on MTV and Comedy Central

[cnn-photo-caption image= http://i2.cdn.turner.com/cnn/2008/images/07/28/art.moveon.cnn.jpg caption="Moveon is hitting the airwaves with a new ad."](CNN) – A liberal advocacy group is targeting young voters in a new political television ad that promotes Barack Obama’s presidential bid set to run on MTV and Comedy Central. While MoveOn.org never states Obama’s name in the ad, it uses a campaign slogan the presumptive Democratic presidential nominee often repeats on the campaign trail: “Hope.”

“Hope: It Could Happen to You,” parodies advertisements frequently directed to younger television viewers about the ill effects of drug use and abuse. Instead, of trying to scare its target audience away from making it a habit to use drugs, the ad suggests that Obama’s message of hope is a positive habit.

MoveOn.org announced Monday that it will spend $150,000 to run the ad for one week on both networks, which cater to younger voters.

Last week, MTV aired its first ever political ad, according to a report by MTV News. “Both Ways Barack,” targeted Sen. Barack Obama and suggested the presumptive Democratic nominee holds inconsistent positions on various issues at the same time.