(Full statement after the jump.)

END_OF_DOCUMENT_TOKEN_TO_BE_REPLACED

Sestak: 'A win for the people'

(CNN) – Rep. Joe Sestak hailed his victory over Sen. Arlen Specter in Pennsylvania's Democratic Senate primary as "a win for the people."

"This is what Democracy looks like," Sestak told his supporters Tuesday night. "A win for the people - over the establishment, over the status quo, even over Washington, D.C."

Related: After 30 years in Washington, Specter ousted by voters

"I have just called congressman Sestak to congratulate him and tell him that I think it is vital that we keep this seat in the Democratic Party, and that I will support him in the election," Specter said.

Related: After 30 years in Washington, Specter ousted by voters

Specter gave a short speech to followers after it became clear that Sestak would carry the night.

END_OF_DOCUMENT_TOKEN_TO_BE_REPLACED

Michael Steele, the chairman of the Republican National Committee, issued the following statement about the Pennsylvania Senate race.

END_OF_DOCUMENT_TOKEN_TO_BE_REPLACED

Kaine: Pennsylvania Dems have made their choice

Tim Kaine, the chairman of the Democratic National Committee, issued the following statement about the Pennsylvania Democratic Senate primary.

END_OF_DOCUMENT_TOKEN_TO_BE_REPLACED

(Read the full statement after the jump.)

END_OF_DOCUMENT_TOKEN_TO_BE_REPLACED 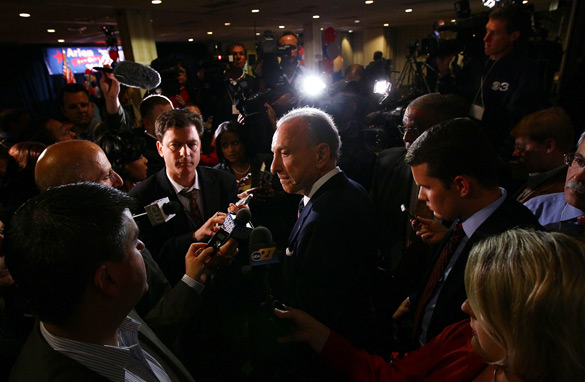 With 42 percent of precincts reporting, Sestak had 51.5 percent of the vote. Specter had 48.5 percent.

With 19 percent of precincts reporting, Specter had 52.1 percent of the vote. Sestak had 47.9 percent.

Specter, a five-term senator, is for the first time running for this seat as a Democrat. He left the Republican Party last year as his support in the GOP dropped after he voted for President Obama's stimulus plan.

Sestak is a retired Navy admiral who at one time trailed Specter 2-to-1 in pre-primary polls.

[cnn-photo-caption image= http://i2.cdn.turner.com/cnn/2010/images/05/18/art.specter.rachel.jpg caption="Sen. Arlen Specter speaks to reporters in Philadelphia."](CNN) - About two hours before polls close in Pennsylvania, a subdued Sen. Arlen Specter walked into the Sheraton Hotel in Philadelphia and told reporters he is optimistic about the outcome of tonight's Democratic primary race.

"I'm optimistic if we get out our vote. I've been in a lot of tough races, a lot of close races," Specter said. "I would describe six of my races as the political fight of my life. I am like a cat with seven lives."

After a hard fought campaign, Specter can only wait for results to be announced.