[cnn-photo-caption image= http://i2.cdn.turner.com/cnn/2008/images/10/06/art.palin.snl.ap.jpg caption="Alaska Gov. Sarah Palin was bested by Tina Fey for the No. 1 spot on the list of the top ten quotes for 2008, according to the Yale Book of Quotations.'"]
(CNN) – With less than three weeks left in the year, the Yale Book of Quotations is out with its list of the 10 quotes for 2008, and statements some politicians probably wish they could take back dominate this year’s list.

This year had “a particularly important and dramatic election,” said Fred Shapiro, editor of the Yale Book of Quotations, about the fact that so many political quotations appeared on the 2008 list. “An election that had a cast of characters among the candidates,” Shapiro added

Indeed, Tina Fey’s “I can see Russia from my house” impersonation of Alaska Gov. Sarah Palin took the No. 1 spot on the list.

Palin herself was not far behind at No. 2 with an answer during one of her interviews with Katie Couric. "All of them, any of them that have been in front of me over all these years,” Palin told Couric when the CBS anchor asked the then-Republican vice presidential candidate what newspapers she read.

McCain economic adviser and former Republican Sen. Phil Gramm took third place for saying “we have sort of become a nation of whiners,” about the struggling economy in a July interview with the Washington Times.
END_OF_DOCUMENT_TOKEN_TO_BE_REPLACED

[cnn-photo-caption image= http://i2.cdn.turner.com/cnn/2008/images/07/10/art.gramm.gi.jpg caption="Gramm was spotted at a McCain event Thursday.'"]
ASPEN, Colorado (CNN) – For the first time since removing himself from John McCain’s campaign, former Sen. Phil Gramm publicly crossed paths with the presumptive Republican nominee at an event Thursday in Aspen.

Gramm stepped down from his role as co-chairman of McCain’s campaign in July after Democrats assailed him for telling a newspaper that the country was in a “mental recession” and describing the United States as “a nation of whiners.”

[cnn-photo-caption image= http://i2.cdn.turner.com/cnn/2008/images/07/18/art.macgramm0718.ap.jpg caption="Former Sen. Phil Gramm looks on as Sen. McCain speaks at a campaign event in this file photo."]
WASHINGTON (CNN) - Former Republican Sen. Phil Gramm said Friday he is stepping down as co-chairman of Sen. John McCain's presidential campaign after comments in which he called Americans "a nation of whiners." 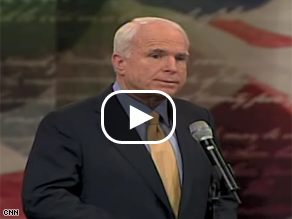 (CNN) - Just how much distance does presumptive Republican nominee John McCain want to put between himself and the unfortunate headlines surrounding top economic adviser Phil Gramm?

Apparently, at least an ocean’s worth.

Campaigning in Michigan, McCain was asked just how big a role Gramm had played in the formulation of his economic plan – and just how much influence the former Texas senator would have if Republicans held on to the White House. “Is there any chance he would be your Treasury secretary, or play a significant economic policy making role in a McCain administration?” asked one reporter.

The Arizona senator replied that Gramm’s influence might be limited to a corner of Eastern Europe.

“I think Senator Gramm would be in serious consideration for ambassador to Belarus,” joked McCain, “although I’m not sure the citizens of Minsk would welcome that.”

The distance between Livonia, Michigan and Minsk is around 5,000 miles.

McCain: 'Phil Gramm does not speak for me'

BELLEVILLE, Michigan (CNN) –- John McCain forcefully repudiated comments by his national campaign co-chair Phil Gramm Thursday, telling reporters, “Phil Gramm does not speak for me. I speak for me.”

Gramm had said in a newspaper interview that the country is merely in a “mental recession,” and called America a “nation of whiners” when it comes to the slumping economy.

Campaigning in the economically lagging state of Michigan – which suffers from has the highest unemployment rate in the nation – McCain held a press conference and quickly disavowed Gramm’s remarks.

“I don’t agree with Sen. Gramm,” McCain said. “I believe that the person here in Michigan that just lost his job isn’t suffering a mental recession. I believe the mother here in Michigan and around America who is trying to get enough money to educate their children isn’t whining.”

END_OF_DOCUMENT_TOKEN_TO_BE_REPLACED

Gramm: 'What we need is more leadership and less whining'

[cnn-photo-caption image= http://i2.cdn.turner.com/cnn/2008/images/07/10/art.gramm.gi.jpg caption="Gramm told CNN he did not mean to suggest Americans are 'whiners.'"](CNN) - Top McCain adviser Phil Gramm tells CNN that his most controversial comment about the economy in a recent interview has been misinterpreted.

The former Texas senator, who advises presumptive Republican nominee John McCain on economic matters, also said he had not been speaking for the campaign when he spoke to a Washington Times reporter. “I didn’t claim to be representing anyone except myself,” he said. Gramm called CNN from his cell phone before boarding a flight Thursday, to clarify his remarks.

Gramm said he that he was trying to say the nation’s leaders, not its people, were “whiners.”

“The whiners are the leaders, hell, the American people are victims, but it didn’t quite come out that way in the story,” Gramm said. These national and congressional leaders “blame speculators and oil companies for our problems, instead of presenting concrete programs for using energy more efficiently, or leaders who don’t think we can compete with Mexico.

“What we need is more leadership and less whining,” he added.

But he stood by his assessment that the country was in a “mental recession.”

“I said we are in a mental recession. We keep getting the steady drum beat of bad news…it’s become a mental recession,” said Gramm. “We don’t have measured negative growth. That’s a fact, that’s not a commentary.”

Asked whether he understood beforehand the kind of political impact his statements might have, he said this outraged reactions his remarks had drawn were just part of the “game” - anytime anyone says something, said Gramm, it can be “taken out of context.”