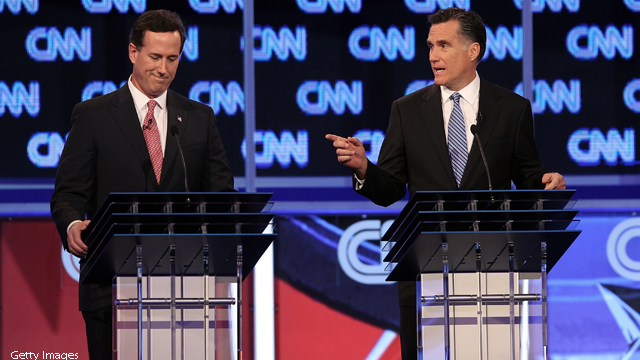 CNN/Time Poll: All tied up in Arizona

Mesa, Arizona (CNN) - On the eve of the final Republican presidential debate before primaries in Arizona and Michigan, as well as the 10 Super Tuesday states, a new survey indicates that Rick Santorum may be closing the gap with Mitt Romney in the Grand Canyon State.

According to a CNN/Time/ORC International poll released Tuesday, 36% of people likely to vote in Arizona's February 28th GOP presidential primary say they're backing Romney as their party's nominee, with 32% supporting Santorum. The former Massachusetts governor's four point margin over the former senator from Pennsylvania is within the survey's sampling error, meaning they are basically tied for the top spot.

CNN LIVE: Tune in Wednesday at 8 p.m. ET for the last presidential debate before Super Tuesday, the CNN/Arizona Republican Party Debate hosted by John King. Follow it on Twitter at #CNNDebate and on Facebook at CNN Politics. For real-time coverage of the Arizona and Michigan primaries, go to CNNPolitics.com or to the CNN apps or CNN mobile web site.
END_OF_DOCUMENT_TOKEN_TO_BE_REPLACED

(CNN) - With six days to go until the midterm elections, a new poll in the most high profile Senate battle in the country indicates Republican challenger Sharron Angle holds a four point advantage over Senate Majority Leader Harry Reid.

According to a CNN/Time/Opinion Research Corporation poll released Wednesday, 49 percent of likely voters in Nevada are backing Angle, who enjoys strong support from many in the Tea Party movement, with 45 percent supporting Reid, the top Democrat in the Senate who's bidding for a fifth term in the chamber. Angle's four point margin is within the poll's sampling error, making it a neck and neck race.

(CNN) - The hotly contested race for Kentucky's open Senate seat is nearing an end with Republican nominee Rand Paul holding a seven-point lead, according to a new poll.

(CNN) - Less than a week before Election Day, Colorado's heated Senate race remains a virtual dead heat, according to a new poll.

Democrats, however, may be pulling away in the race for governor - a contest in which Republicans once had high hopes.

(CNN) - Six days before the midterm elections, a new poll indicates that it's too close to call in the fight for an open Senate seat in Pennsylvania.

According to a CNN/Time/Opinion Research Corporation survey released Wednesday, Republican nominee and former congressman Pat Toomey holds a 49 to 45 percent advantage over Rep. Joe Sestak, the Democrats' nominee, among likely voters in the Keystone State, with six percent undecided or backing another candidate. Toomey's four point margin is within the poll's sampling error.

(CNN) - A new survey indicates that the Democrats have slight advantages in the California battles for senator and governor.

According to a CNN/Time/Opinion Research Corporation poll released Wednesday, 50 percent of likely voters in the Golden State say they support Democratic Sen. Barbara Boxer, with 45 percent backing Republican challenger Carly Fiorina and four percent undecided or backing a different candidate. Boxer's five point margin is within the survey's sampling error and is down from a nine point advantage in CNN/Time polling from last month.

CNN/Time Poll: All tied up in race for Ohio governor

(CNN) - The gubernatorial battle in Ohio is deadlocked, according to a new poll. A CNN/Opinion Research Corp. survey released Wednesday also indicates that the Republicans hold a wide lead in the fight for the state's open Senate seat.

Forty-eight percent of likely voters in Ohio say that if the election were held today, they'd vote for Gov. Ted Strickland, with 47 percent saying they'd vote for former Rep. John Kasich, the GOP challenger, and 3 percent are undecided. Strickland's one-point margin is well within the survey's sampling error.

(CNN) - A new poll indicates that the GOP is on the cusp of capturing an Arkansas Senate seat last held by a Republican in the 1870s.

END_OF_DOCUMENT_TOKEN_TO_BE_REPLACED

(CNN) - Marco Rubio is widening his lead in the battle for an open Senate seat in Florida, according to a new poll.

CNN/Time Poll: All tied up in Alaska Senate race

(CNN) - A new poll indicates a dead-even race in the Alaska battle between Republican Senate nominee Joe Miller and GOP Sen. Lisa Murkowski, who's running for re-election as a write-in candidate. But a CNN/Time/Opinion Research Corporation survey released Wednesday also suggests that confusion or frustration over the write-in procedure could cost Murkowski crucial votes in her bid to keep her seat.

According to the poll, 37 percent of likely voters in Alaska say if the election were held today, they would vote for Murkowski, with an equal amount saying they'd cast a ballot for Miller, and 23 percent saying they'd vote for Sitka Mayor Scott McAdams, the Democrats' Senate nominee. Miller and Murkowski were also deadlocked in a CNN/Time poll conducted late last month.