(CNN) - New poll numbers suggest the Senate contests in Washington State and Pennsylvania are tightening up while the GOP is up big in the Senate race in Ohio.

WASHINGTON (CNN) - Now you can take the Best Political Team with you on your iPod.

In the latest Best Political Podcast, Bill Schneider reports on new CNN/Opinion Research Corporation poll numbers that show Mike Huckabee in a virtual tie with Rudy Giuliani, Candy Crowley takes a look back at the "Oprah-bama" barnstorm through three early primary states, and Ed Henry has a report on the White House's reaction to the CIA tapes controversy.

Plus, everybody has to start somewhere. Wolf Blitzer tells you what some of the presidential candidates said about their worst jobs.

What if you held a primary and nobody came?

Watch Bill Schneider's report about the unusual situation Democrats are facing in Florida.

LAS VEGAS, Nevada (CNN) - Now that the Democrats are done debating in Las Vegas, it's time for the next act. Bring on the elephants.

The former New York City mayor was the first choice of 29 percent in the survey out Friday.

Giuliani was campaigning in the Silver State earlier this week and he said that "we want to make sure that we give ourselves every chance to win Nevada."

Mitt Romney, who's campaigning in Las Vegas Friday, is in second place, at 21 percent. The former Massachusetts governor is followed by former Senator from Tennessee Fred Thompson with 14 percent and Senator John McCain of Arizona at 12 percent. Read the complete poll results (PDF)

The date of the New Hampshire primary is still in limbo. Secretary of State, Bill Gardner, is still waiting for Michigan to resolve its legal disputes before he can set a date.

Two big heavyweights, Al Gore and Arnold Schwarzenegger, are scheduled to discuss energy policy and climate change in the Granite state this month. Details are still in the works, but here is a sneak preview.

Mitt Romney is the frontrunner in New Hampshire, with the latest CBS/New York Times poll showing a 18 point lead over John McCain and Rudy Giuliani. Perhaps this is why.

Former Sen. John Edwards is a different candidate from 2004. Check out the Boston Globe's examination of the former North Carolina Senator.

And President Bill Clinton is campaigning in the state Friday. He has events scheduled in Gorham, Whitefield and Manchester. 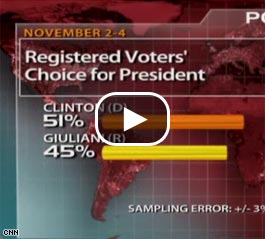 Related: A year from Election Day, Clinton remains the person to beat 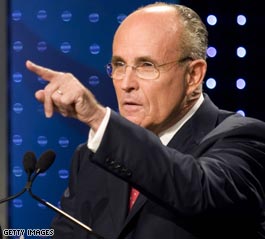 WASHINGTON (CNN) - In the Republican presidential race, former New York Mayor Rudy Giuliani continues to be the leading candidate, with the backing of 28 percent of the Republican primary voters polled. Former Sen. Fred Thompson of Tennessee was backed by 19 percent. Sen. John McCain of Arizona was the top pick of 16 percent, and former Massachusetts Gov. Mitt Romney had 11 percent.

The poll involved telephone interviews with 397 Republicans or independents who lean Republican. The poll's margin of error was 5 percentage points.

WASHINGTON (CNN) - Sen. Hillary Clinton continues to dominate the race for the Democratic presidential nomination, but after coming under pointed attacks from rivals, her lead has shrunk from a month ago, according to a CNN/Opinion Research Corporation poll released Monday.

The New York Democrat is the top choice of 44 percent of the likely Democratic voters interviewed for the poll. Her closest rival, Sen. Barack Obama of Illinois, was the top choice of 25 percent, and former Sen. John Edwards of North Carolina has 14 percent.

All other Democratic candidates were in single digits. New Mexico Gov. Bill Richardson was was backed by 4 percent, Sen. Joe Biden of Delaware by 3 percent, Sen. Christopher Dodd by 2 percent, Ohio Rep. Dennis Kucinich by 2 percent and former Alaska Sen. Mike Gravel was at 1 percent.

The poll involved 467 interviews conducted on November 2-4 with Democrats or independents who lean Democratic. The poll's margin of error was plus or minus 4.5 percentage points.

Watch the Best Political Team on TV take a look at the state of the race for the White House. 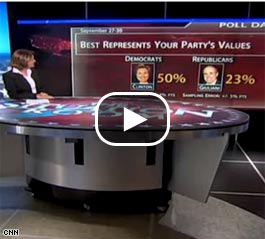