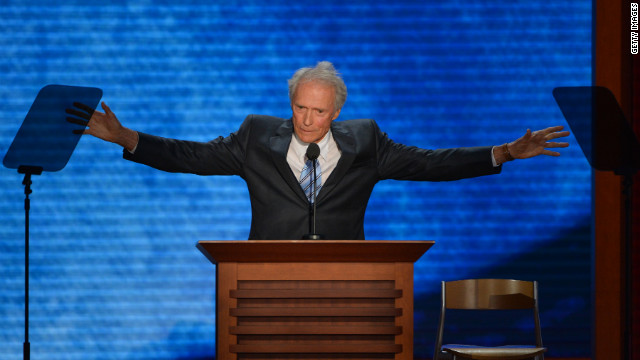 Eastwood: If they were 'dumb enough to ask me…'

(CNN) – Clint Eastwood isn't taking much time to reflect on his unique endorsement of Republican presidential candidate Mitt Romney at last month's Republican National Convention, after all he says if they're "dumb enough" to ask him, they'll take what they get.

"If somebody is dumb enough to ask me to go to political convention and say something, they're gonna have to take what they get," said Eastwood in an interview Tuesday with the television show "Extra" about the convention speech that won rave reviews, puzzled looks and slacked jaws.
END_OF_DOCUMENT_TOKEN_TO_BE_REPLACED 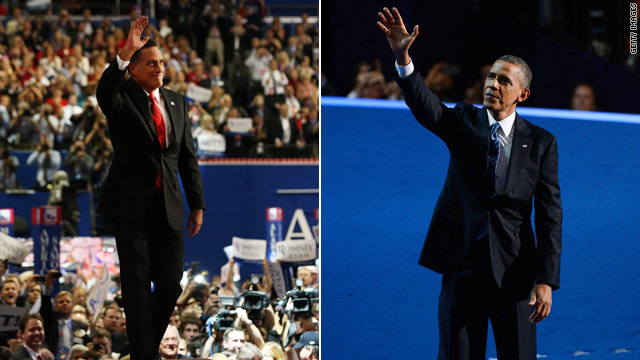 Dems get boost as both parties seek to leverage conventions

Charlotte, North Carolina (CNN) - For Democrats who gathered at their convention in the swing state of North Carolina, the high glitz extravaganza watched by millions on television was a partisan infomercial that has paid off, for the moment, in energizing their voters.

For Republicans who convened in the battleground state of Florida, the impact on the party faithful of their event has waned.

According to a CNN/ORC International Poll (PDF) released Monday, 52% of likely voters nationwide back the president, compared to 46% for Romney. Just before the convention in Charlotte, North Carolina, Obama was tied with Romney 48%-48%.
END_OF_DOCUMENT_TOKEN_TO_BE_REPLACED

Zanesville, Ohio (CNN) - Fresh off the Democratic National Convention, Vice President Joe Biden used two appearances in Ohio on Saturday to mock the Republican National Convention in Tampa and accused his opponents of not having the courage to explain their policies. Those and other comments were quickly labeled as "false and discredited attacks" by the Romney campaign.

Biden even went galactic: claiming that a Martian visiting the RNC would have, essentially, been lost in translation.
END_OF_DOCUMENT_TOKEN_TO_BE_REPLACED 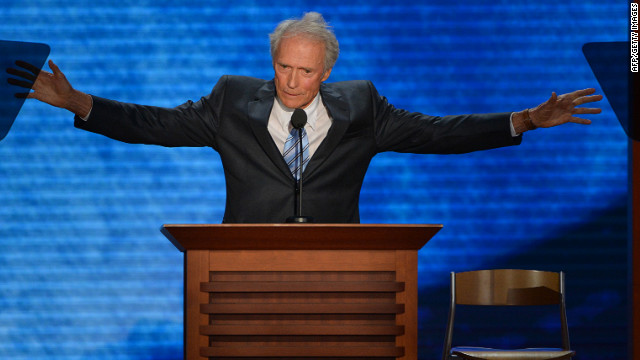 "They vet most of the people, but I told them, 'You can't do that with me, because I don't know what I'm going to say,'" Eastwood told the Carmel Pine Cone. Eastwood served as the mayor of Carmel-by-the-Sea in the 1980s.
END_OF_DOCUMENT_TOKEN_TO_BE_REPLACED

No bump for Christie after convention keynote

The survey from Quinnipiac University, taken August 27-September 2, indicated that 52% of adults in New Jersey approve of the job Christie is doing as governor. That's statistically unchanged from the 54% who approved of Christie in a July 17 survey. The outspoken New Jersey governor addressed delegates in Tampa last Tuesday.
END_OF_DOCUMENT_TOKEN_TO_BE_REPLACED

CNN Poll: Did Romney get a convention bounce?

Charlotte, North Carolina (CNN) - It's the question everyone's asking: Did Mitt Romney get a bounce out of last week's Republican National Convention in Tampa, Florida?

According to a new national poll released Tuesday, just before the start of the Democratic convention, the GOP presidential nominee appears to have received a one-point convention bounce, normal for the modern political era. 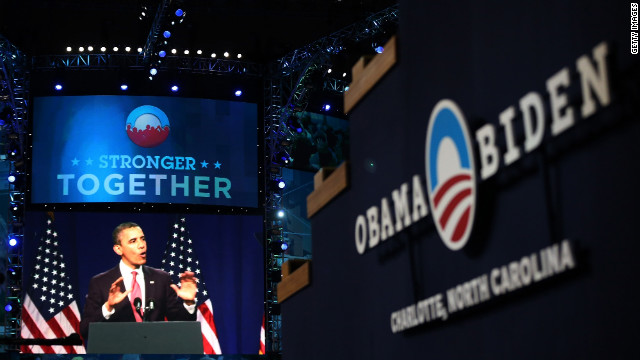 CNN Election Roundtable to tackle questions LIVE from the DNC

With the 2012 Democratic National Convention getting underway in Charlotte this week, the party of the president will have a chance to solidify its base and reach out to new voters.

Can the party shift attention away from Mitt Romney and the GOP? Will President Barack Obama reignite the magic that launched him to victory in 2008? And will the Dems even try to top Clint Eastwood's empty chair?
END_OF_DOCUMENT_TOKEN_TO_BE_REPLACED

Charlotte, North Carolina (CNN) - Americans are divided on whether last week's Republican Convention made them more likely to vote for GOP presidential nominee Mitt Romney, according to a new national survey.

A Gallup poll released Monday morning indicates that four in ten adults say they are more likely to support Romney based on what they read or saw from last week's convention in Tampa, Florida, with 38% saying they are less likely to vote for the Republican challenger, and 22% saying they didn't know or the convention didn't make any difference to their vote.
END_OF_DOCUMENT_TOKEN_TO_BE_REPLACED