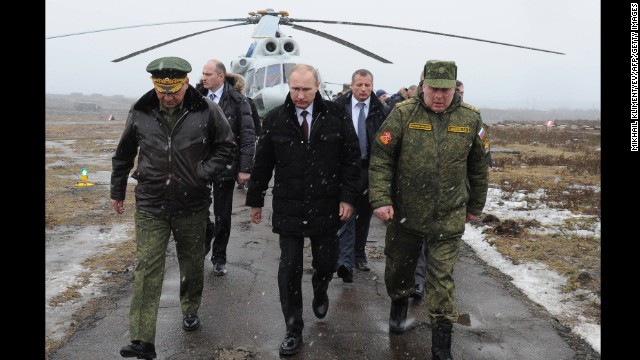 END_OF_DOCUMENT_TOKEN_TO_BE_REPLACED

Washington (CNN) - Some U.S. lawmakers are ready to say that it’s futile to try to persuade Russia to give up control of Crimea.

Sen. Dianne Feinstein, chairwoman of the Senate Intelligence Committee, told CNN chief political correspondent Candy Crowley on Sunday that the debate over the Crimean Peninsula is "done" and the region is now under Moscow's control.

END_OF_DOCUMENT_TOKEN_TO_BE_REPLACED

Washington (CNN) - Nearly six in ten Americans say they approve of the sanctions the United States and the West have placed on Russia, but they don't expect the sanctions to be effective, according to a new national survey.

And a CBS News poll also indicates more people disapprove than approve of how President Barack Obama has handled the crisis, and a majority of the public feels the situation in Ukraine is beyond America's control and that the U.S. doesn't have a responsibility to get involved.

END_OF_DOCUMENT_TOKEN_TO_BE_REPLACED

The Hague, Netherlands (CNN) - President Barack Obama on Tuesday defended his response to Russia's military led annexation of the Crimean peninsula from Ukraine.

At a news conference after a nuclear security summit in the Netherlands, Obama noted that Moscow could face further sanctions should Russian forces invade other parts of Ukraine.

He issued a warning to Russian President Vladimir Putin.

END_OF_DOCUMENT_TOKEN_TO_BE_REPLACED 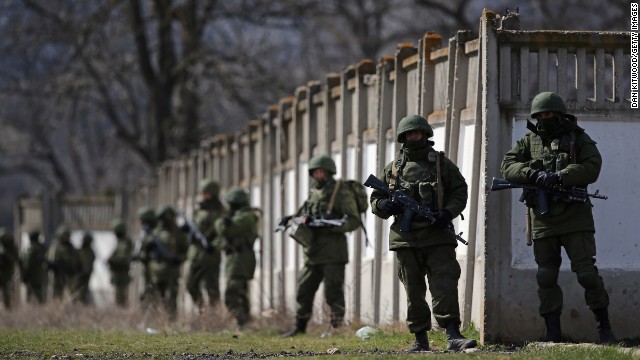 Russian military personnel surround a Ukrainian military base in Perevalnoe, Crimea, on March 19. Ukrainian troops have been encircled by pro-Russian forces in their bases for days.
March 24th, 2014
06:47 PM ET

(CNN) – A Ukrainian aid package that previously stalled on Capitol Hill cleared a procedural hurdle on Monday as senators agreed to begin debating the bill this week.

The vote was 78 to 17 and came on the same day that the United States and other industrialized powers stepped up their pressure on Russia over the annexation of Crimea.

END_OF_DOCUMENT_TOKEN_TO_BE_REPLACED

(CNN) - The Obama administration said Sunday that action against Russia for its incursion into Crimea is working, as Moscow’s economy struggles under sanctions imposed by the United States and other countries.

"This is exactly already a real cost for (Russian President Vladimir) Putin and in Russia and the economy," White House deputy national security adviser Tony Blinken said on CNN's "State of the Union."

END_OF_DOCUMENT_TOKEN_TO_BE_REPLACED

(CNN) – President Barack Obama’s European tour – originally focused on nuclear security and a first-time meeting with the new Pope – has taken on new urgency as international allies seek ways to punish Russia for its incursion into Ukraine.

Obama’s four-day continental excursion still features some Old World flair at the newly refurbished Rijksmuseum in Amsterdam, Netherlands, and a tour of the Colosseum in Rome. But amid the Vermeers and ancient ruins, the President must try to rally European leaders around a tougher response to Russian President Vladimir Putin’s movement into the Crimean Peninsula.

END_OF_DOCUMENT_TOKEN_TO_BE_REPLACED

(CNN) – Rep. Mike Rogers said Sunday he believes Russian President Vladimir Putin has even more aspirations in Ukraine - and the troops to back them up.

Rogers is chairman of the House Intelligence Committee and said he based his belief on information from U.S. intelligence officials.

END_OF_DOCUMENT_TOKEN_TO_BE_REPLACED

U.S. concerned Russians not being truthful about Ukraine intentions

(CNN) - Based on intelligence, Obama administration officials are very concerned the Russians are not being truthful when they say their forces near Ukraine's eastern and southern borders are merely there for training exercises, sources tell CNN.

Officials assess that Russia - as early as coming days - could use any number of pretexts to justify further military incursions into Ukraine.