New York (CNN) - One of the most fascinating dynamics of this election year has been the way Democrats have stayed far away from reminding voters they voted for health care reform. 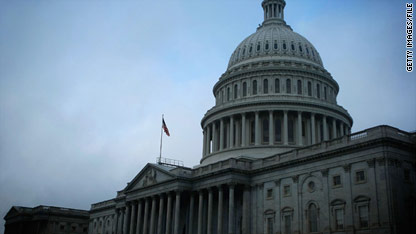 CORRECTION: In Thursday's original post, Rep. Scott Murphy was mistakenly identified as Rep. Scott Brown. We have corrected the error throughout the story.

This is Sen. Kirsten Gillibrand's old seat, which remained in Democratic hands when Rep. Scott Murphy won the special election held last year. The GOP has mounted a pretty strong effort to win this district over to their column, with a ticket that unified even before the state's primary, when Republican candidate Pat Ziegler dropped out of the race and endorsed retired Army Colonel and Iraq vet Chris Gibson. Still, heading into the final stretch of the general election, prominent political handicappers Stuart Rothenberg and Charlie Cook agree that this seat will likely stay blue.

END_OF_DOCUMENT_TOKEN_TO_BE_REPLACED

Boehner to raise money for Republican who backed mosque

Washington (CNN) - House Minority Leader John Boehner came out forcefully against President Obama's decision to back the construction of an Islamic center near the World Trade Center site in lower Manhattan, calling the endorsement "deeply troubling."

But Boehner is scheduled to headline a fundraiser in upstate New York on Friday for a Republican House candidate who recently took a position quite similar to Obama's.

The candidate, Chris Gibson, is challenging Democratic Rep. Scott Murphy in New York's 20th congressional district. On his Facebook page last Wednesday, Gibson responded to a voter who wanted to know his position on the controversial project.

END_OF_DOCUMENT_TOKEN_TO_BE_REPLACED

"Obama's campaign used it really, really well and it got a lot of coverage and as a result our activists read it and said 'Hmm, why can't we do this? "We can do this too,'" new media strategist Robert Willington said in an interview with CNN.

Willington and two of his colleagues from the Brown campaign were the featured speakers at a gathering of conservative bloggers and online activists at the Heritage Foundation.

"We knew the odds were stacked against us," said Willington, who later added, "So when we first sat down, we decided to do things a bit differently."
END_OF_DOCUMENT_TOKEN_TO_BE_REPLACED

Murphy to get sworn in on Tuesday

WASHINGTON (CNN) – New York's newest congressman, Democrat Scott Murphy, will officially get sworn in on the House floor on Tuesday.

The special election for the congressional seat in New York's 20th district on March 31 was too close to call for weeks, but on Friday, Republican Jim Tedisco conceded and Murphy was declared the winner.

This seat was last held by Sen. Kirsten Gillibrand, who resigned to take Secretary of State Hillary Clinton's place in the Senate.

[cnn-photo-caption image= http://i2.cdn.turner.com/cnn/2009/images/04/01/art.getty.vote.jpg caption="The race was too close to call following the March 31 election, but as absentee and overseas ballots poured in the past few weeks, Murphy's lead grew."] (CNN) - It took nearly a month, but Democrat Scott Murphy has won the battle for New York's 20th congressional district.

"I look forward to rolling up my sleeves in Washington to bring jobs, opportunity and prosperity back to upstate New York," Murphy said in a statement.

The race was too close to call following the March 31 election. But as absentee and overseas ballots poured in the past few weeks, Murphy's lead grew.

The Missouri-born Murphy, 39, is a millionaire venture capitalist. Tedisco, 58, is a longtime New York state lawmaker and ranking Republican in the State Assembly.

END_OF_DOCUMENT_TOKEN_TO_BE_REPLACED

With all the ballots counted, Democrat Scott Murphy has a 273-vote lead over Republican Jim Tedisco, out of nearly 180,000 votes cast in the March 30 special election, according to unofficial results from the New York State Board of Elections.

But more than 1,300 ballots have been laid aside based on objections from one side or the other, and attorneys from both camps will argue in court today over the status of those votes.

The Missouri-born Murphy, 39, is a millionaire venture capitalist. Tedisco, 58, is a longtime New York state lawmaker and ranking Republican in the State Assembly.

Regardless of who wins the special election, the Democrats will continue to hold a large majority in the House of Representatives. But what normally would have been a local contest with little national interest partially evolved into an early referendum on President Barack Obama, his polices to jump-start the economy, and the reputations of the Democratic and Republican parties, as both national parties and their congressional committees poured money and resources into the race.

Tedisco, Murphy both confident about a win in NY-20

WASHINGTON (CNN) - As election day closes without a winner in New York's 20th congressional district, each of the candidates sounded an optimistic tone that he would come out on top after all the votes are counted.

Democrat Scott Murphy currently leads Republican Jim Tedisco by 25 votes, but the results don't include absentee ballots. Murphy said that because he was able to close a 20-point deficit in the polls in recent weeks, that he thinks that his momentum will carry him through.

But Tedisco said that because the tally so far doesn't include military voters, who tend to lean Republican, the remaining ballots will push him over the edge.

"When we finish those counts, we believe we'll be off to Congress and we couldn't be more excited to represent this outstanding group of constituents," Tedisco said at a press conference on Wednesday.

"Upstate New York can have a congressman who works for them," the front of the mailer said, with arrows pointing to Limbaugh, Palin and Bush. "Or one who works for you."

"Republicans want to stop President Obama. On Tuesday, you can help stop them," the mailer said above a picture of Murphy.

The special election on Tuesday to fill Sen. Kirsten Gillibrand's vacant congressional seat pits Murphy against Republican Jim Tedisco. Tedisco once held a comfortable lead in the conservative district, but the latest polls show Murphy closing in on his challenger.

In the 60 second spot titled "National Tragedy," the NRCC highlights Murphy's opposition to the death penalty for the plotters of the September 11 terror attack.

The video presents a segment from the "Fred Dicker Show" where Murphy defended his position opposing the death penalty in all cases, while images of the 9/11 attackers flash on screen.

"I think that we so often deal with cases where the evidence may not be totally conclusive and we can't prove for beyond any shadow of a doubt," Murphy recently said on the show. "I think that the cost is just not accurate for it. It's so much more costly than putting someone away. It's a big expense."

"So you're against the death penalty for terrorists," Dicker asks.

Voters in the special election to replace Sen. Kirsten Gillibrand go to the polls on Tuesday.