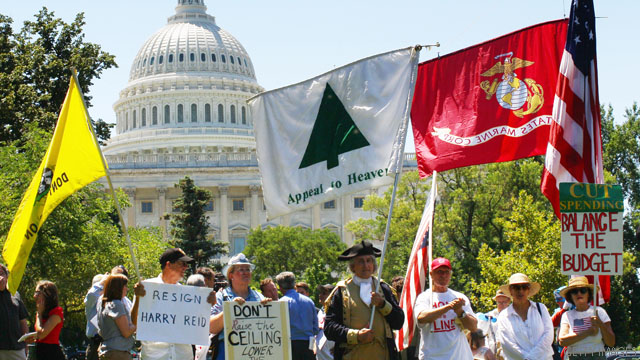 Who is the Tea Party Caucus in the House?

(CNN) - Fiery Republicans known as the Tea Party Caucus are at the center of the debate over which version of a plan - if any - to cut spending and raise the debt limit should be adopted in Congress.

These conservatives, many of whom were swept into office during the 2010 midterm elections, have made it their mission to reign in spending and shrink the size of government, even if it means taking the country to the edge of default.
END_OF_DOCUMENT_TOKEN_TO_BE_REPLACED

Washington (CNN) - Few groups have the clout to convince senators and members of the House to leave Capitol Hill, for a few hours, to personally address their concerns and gripes.

But as the Tea Party movement flexes its political muscle, it appears it has sway with some lawmakers - even as some Americans express reservations about the movement.
END_OF_DOCUMENT_TOKEN_TO_BE_REPLACED

Washington (CNN) - Spirited Tea Party activists, confident they staggered the Washington establishment with their successes in the midterm elections, showed off their new found influence Thursday at the first meeting of the newly formed Senate Tea Party Caucus.

"You're not here as a tourist, not as a visitor, but as stockholders. You're here with us today because we want you to be the board of directors of what's going on here in the Congress," Sen. Jim DeMint, R-South Carolina, told the 150 or so activists - famous for being grass roots outsiders - who showed up at a stately Capitol Hill hearing room to exchange views with the senators who make up the caucus.
END_OF_DOCUMENT_TOKEN_TO_BE_REPLACED